One of the benefits of living in Austin was being driving distance from so many great high school bands.  The Dallas area in particular has been so supportive of my music ever since Steve Andre and the Grapevine High School Band performed Redline Tango back in 2005.  (Plus, kudos to the Dallas Symphony, who gave the second performance of “Redline Tango” – the original orchestral version.  Getting a second performance is often a lot harder than a first performance.)  When AEJ and I decided to move to Boston last summer, I knew I didn’t want to give up the opportunity to work with the Texas high schools.  Why not continue to return to Texas during contest season to work with a bunch of bands, back-to-back, every year?  But how would I put such a thing together?

Enter TMEA, and conversations with two people in particular: Benny Davis of Rockwall Heath High School, and Charles Pennington of Allen High School.  Through a series of phone calls and emails, those two conductors put together a string of clinics that I couldn’t have scheduled on my own, largely because I didn’t know who all was performing my music this year.  (When I sell a set through a music store like JW Pepper, I have no idea who ends up with the piece.)  With the addition of a few other clinics requested via email, I ended up with a total of eleven high school clinics between Monday night and Thursday morning, all in the Plano/Allen area, and the Rockwall area.  And here’s what happened.

I arrived on Monday afternoon and rented a car at Advantage Rent-A-Car.  I mention them only because you should never, under any circumstance, rent from Advantage Rent-A-Car.  They might be $5 less per day, but you’ll spend up to 45 minutes waiting for them to “prepare” your car.  After four hours on a plane, I don’t imagine most people would be too excited about standing for 45 minutes to wait for a car, only to end up with a car much larger than requested.  I wanted a small car to save on gas, but they gave me this minivan.  At least it’s a Dodge.  As my friend Bruce Richardson said when he saw it, “A Dodge! You’re just like Eminem.”  Indeed.  And as AEJ said, if you’re driving from school to school to work with kids, the best impression is to arrive in a van, preferably with tinted windows. 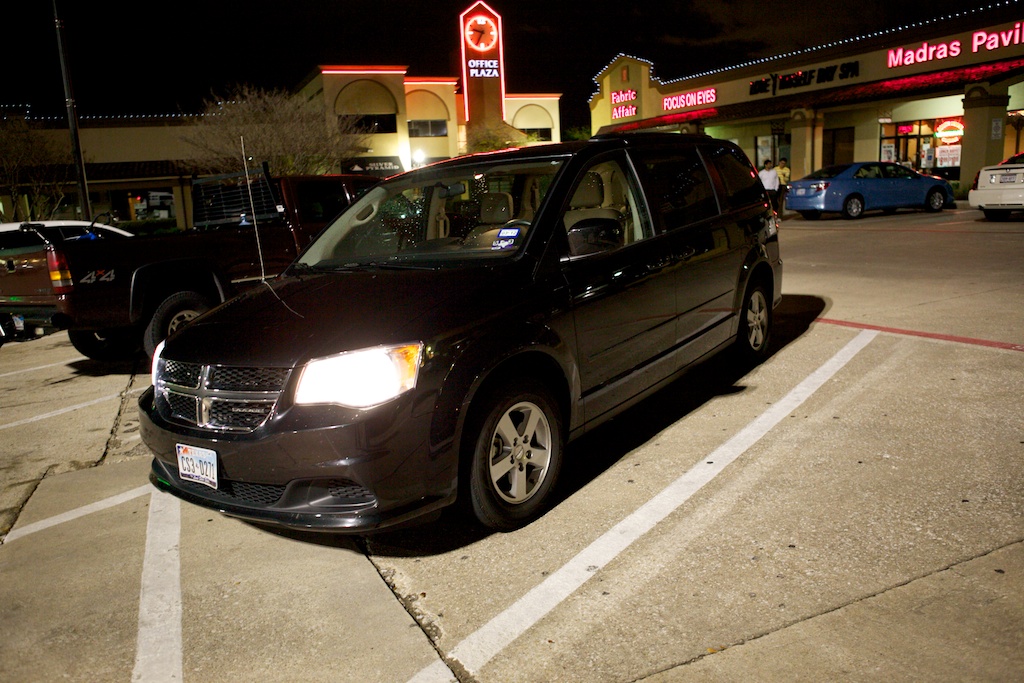 First stop: Allen High School! Holy crap, this was the most incredible high school facility I’d ever seen. I only saw the new performing arts wing, so I don’t know what happens in the rest of the building, but I assume there’s an indoor pool, a bowling alley, a spa, and possibly a Maserati dealership. This is the lobby – of a high school concert hall.  You know what every high school theater lobby needs? 13 LCD displays. 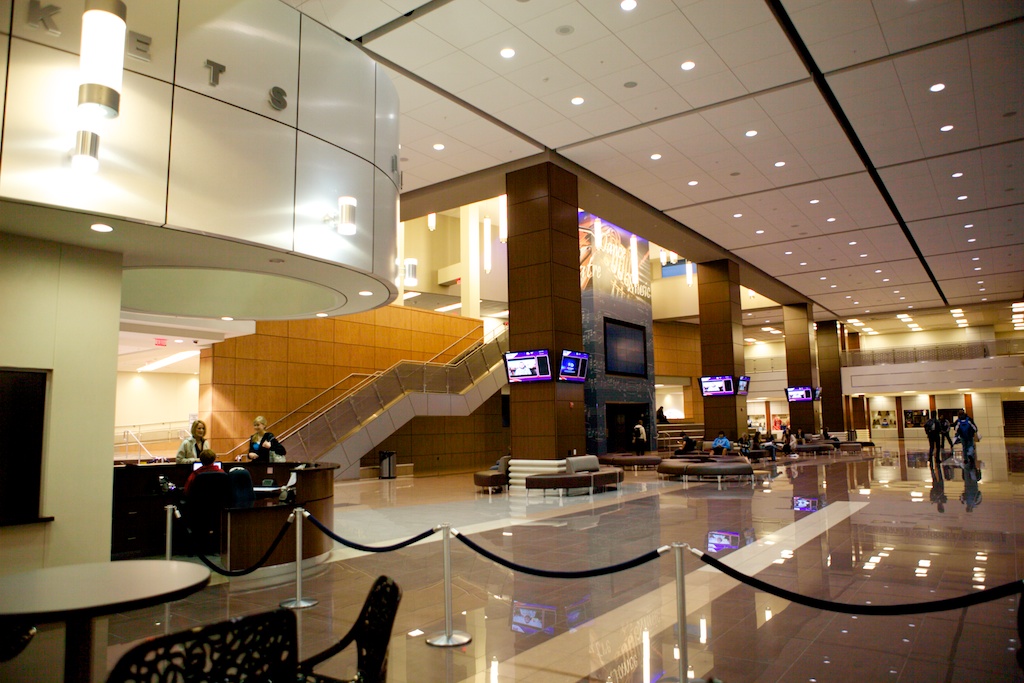 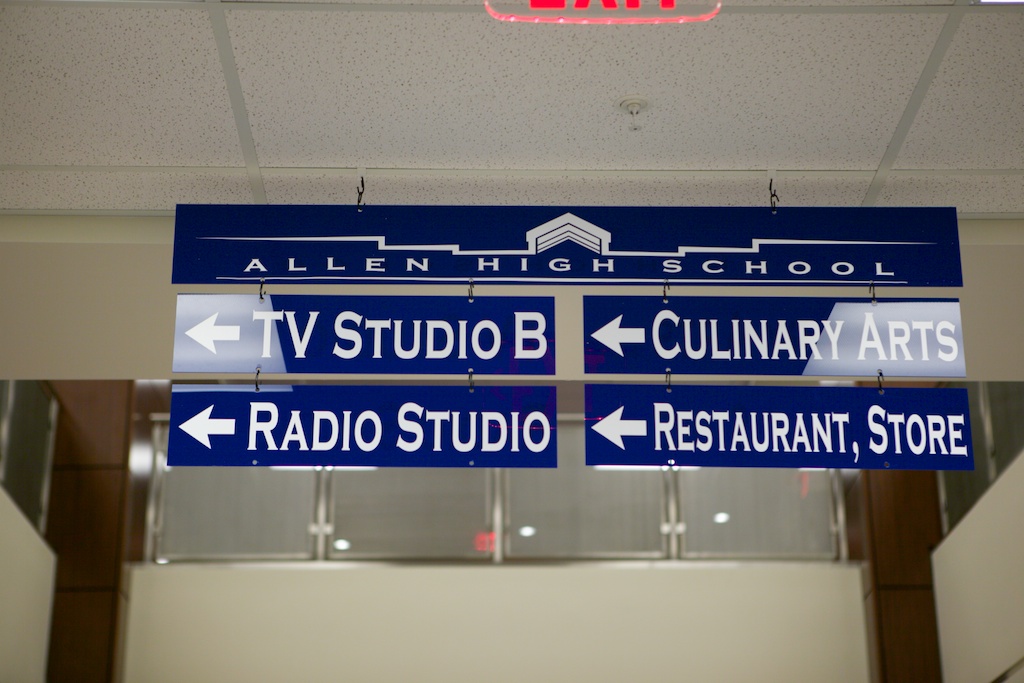 Culinary Arts? Like, burger flipping? No. Culinary arts. In an industrial grade, stainless steel kitchen that outclasses most restaurants. 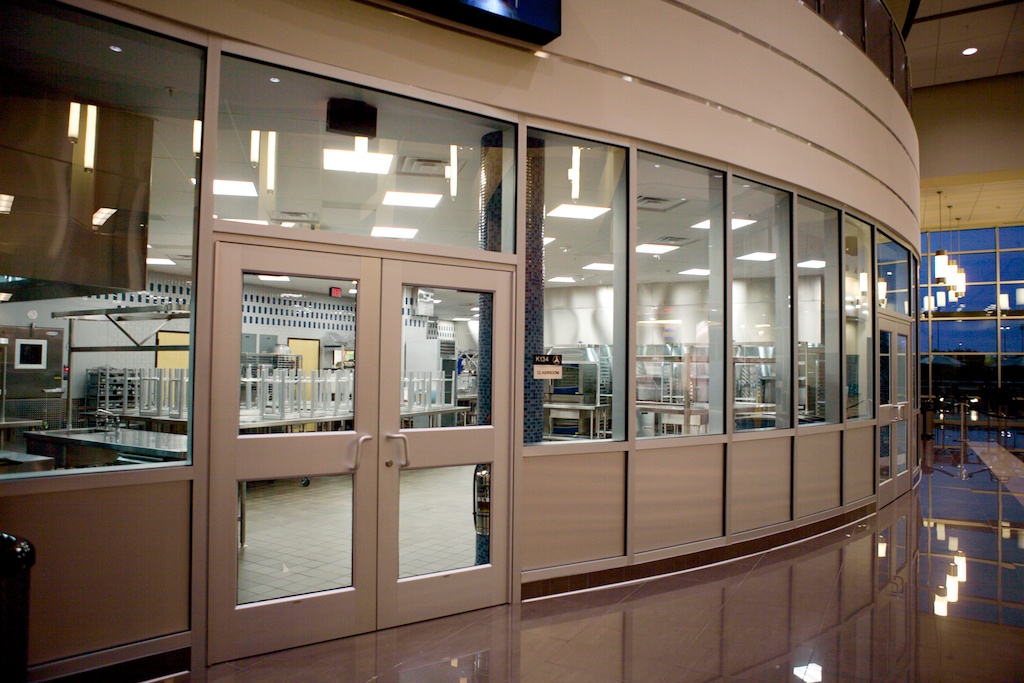 And they don’t just prepare that food for themselves, or just for a grade. No, they have a restaurant. A very nice restaurant.  (Presumably, these bars are normally open.) 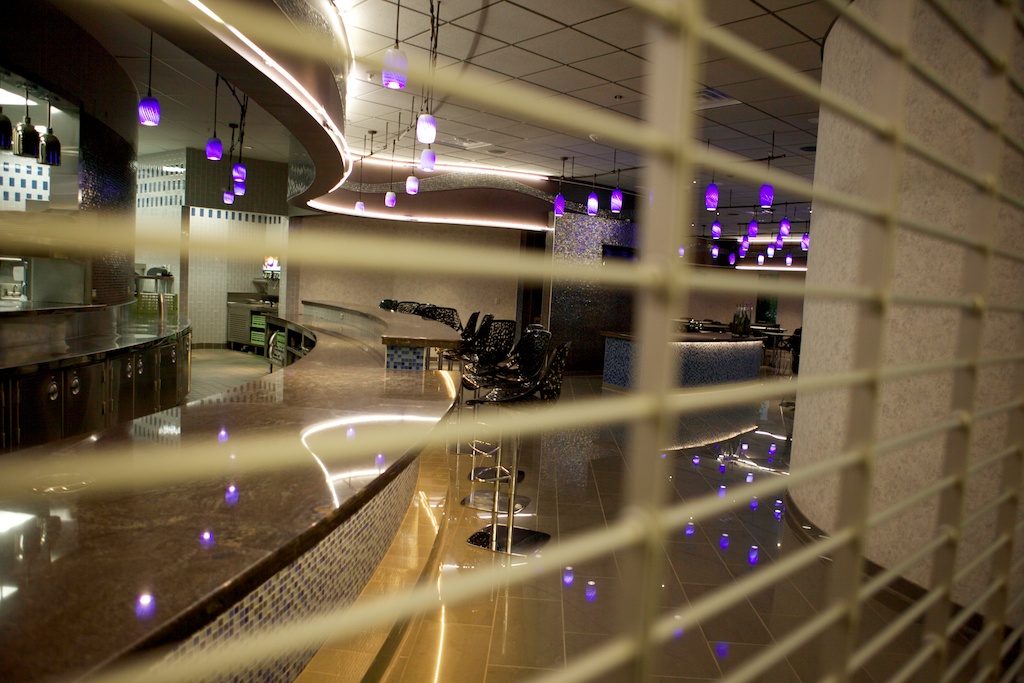 When I was in high school, I was in drama club (I was the president of the drama club, until I was impeached in a scandal — true story), and I, for a time, thought I’d like to be on TV. (I’ve been told that my large head and tiny body would work well on the small screen.) If my high school had Allen’s TV production facilities, my life might have turned out differently. “Let’s go to John John Mackey for the weather.” 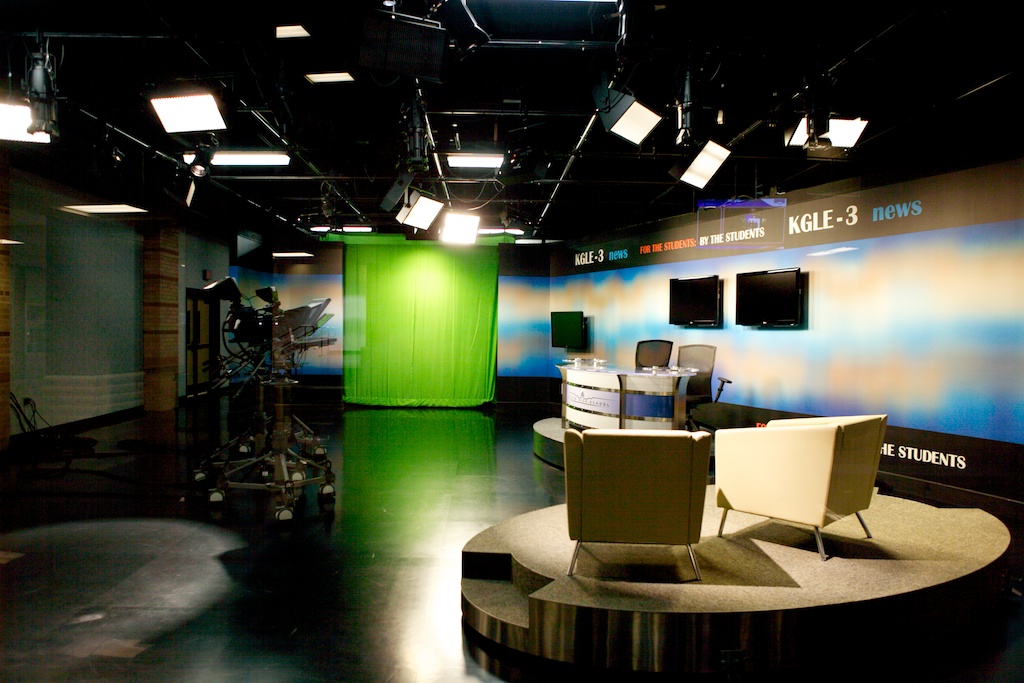 I won’t get into the classrooms, with their massive touch-screen computer displays and stereo systems, because I have a lot of schools to cover. Let’s just say that Allen has an incredible facility, and I’ve never seen anything like it. 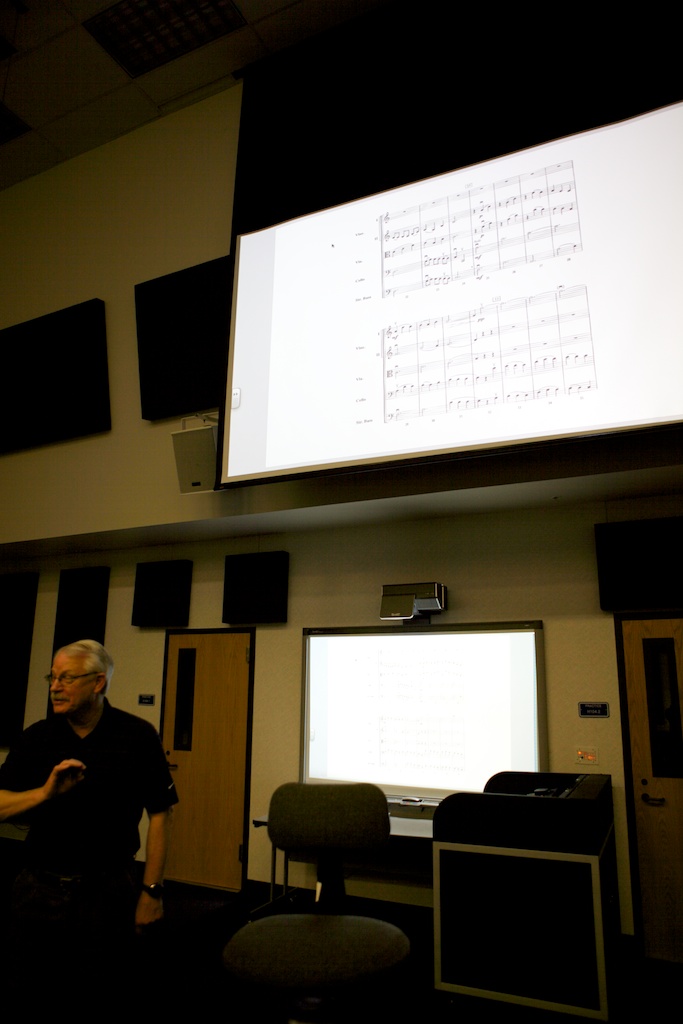 And I didn’t even get a picture of their new concert hall, a beauty that seats 1500 and sounds better than just about any college concert hall I’ve heard. Unbelievable. And then there’s the band. 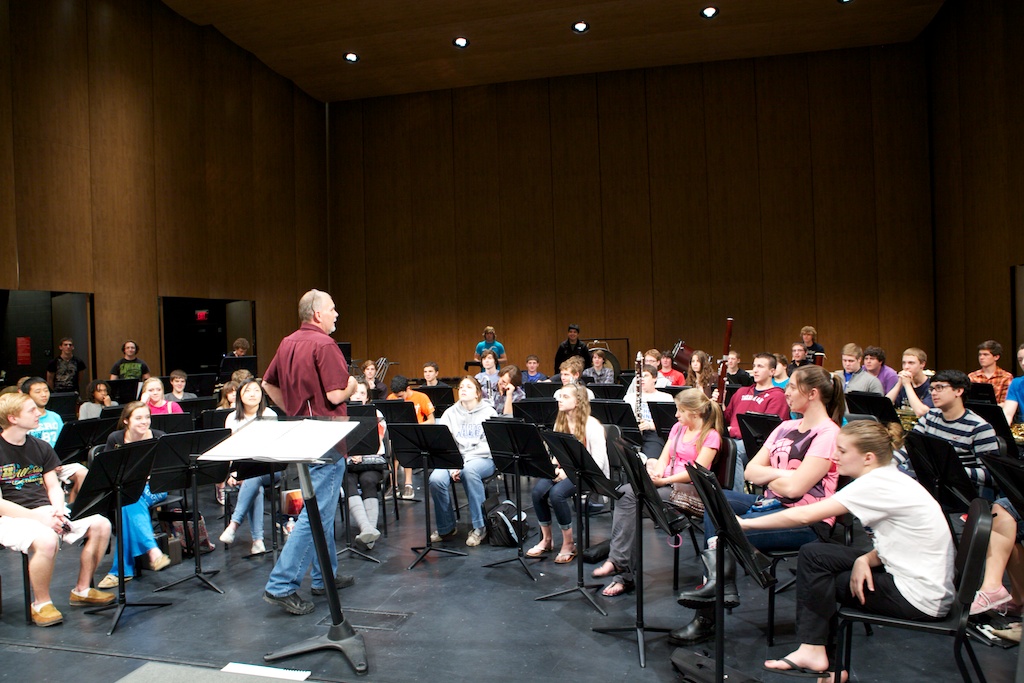 This is one of the largest schools in the United States, and with nearly 5000 students to pull from — just in grades 10-12! — it’s not surprising that this is an incredible band. Solid playing throughout, and Mr. Pennington gets not just technique, but expressive musicianship from his ensemble. It was a great way to start the week. 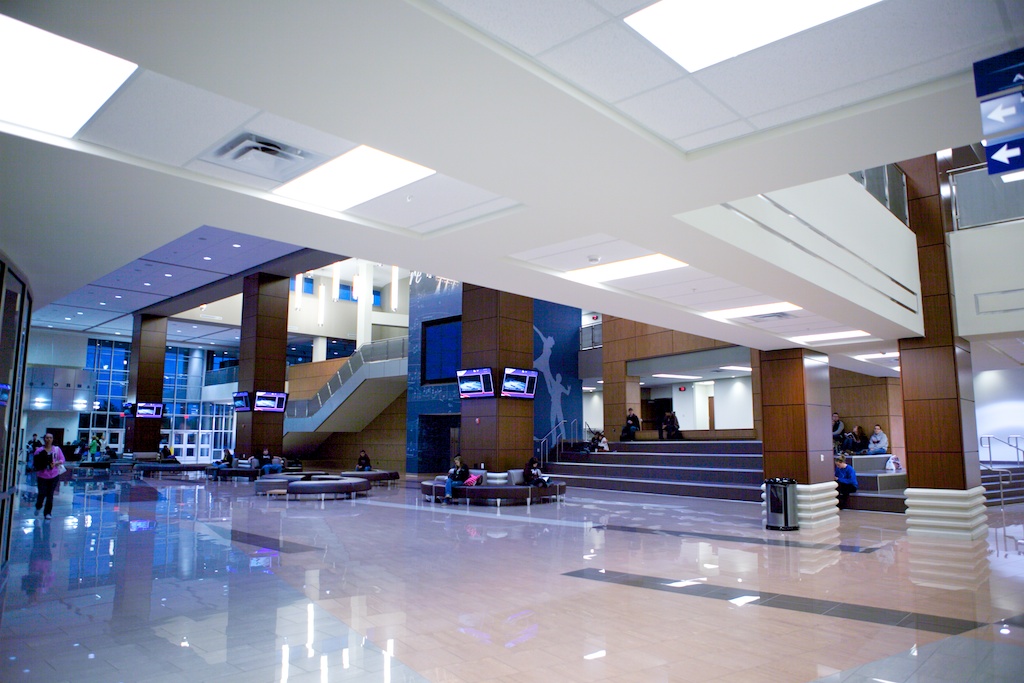 The next day, after a 7:30am rehearsal at Allen, I headed to Plano East High School — another massive, stunning facility.  As I said on Facebook, if your high school has a manmade lake and a dedicated fine arts building, your school might be fancy. 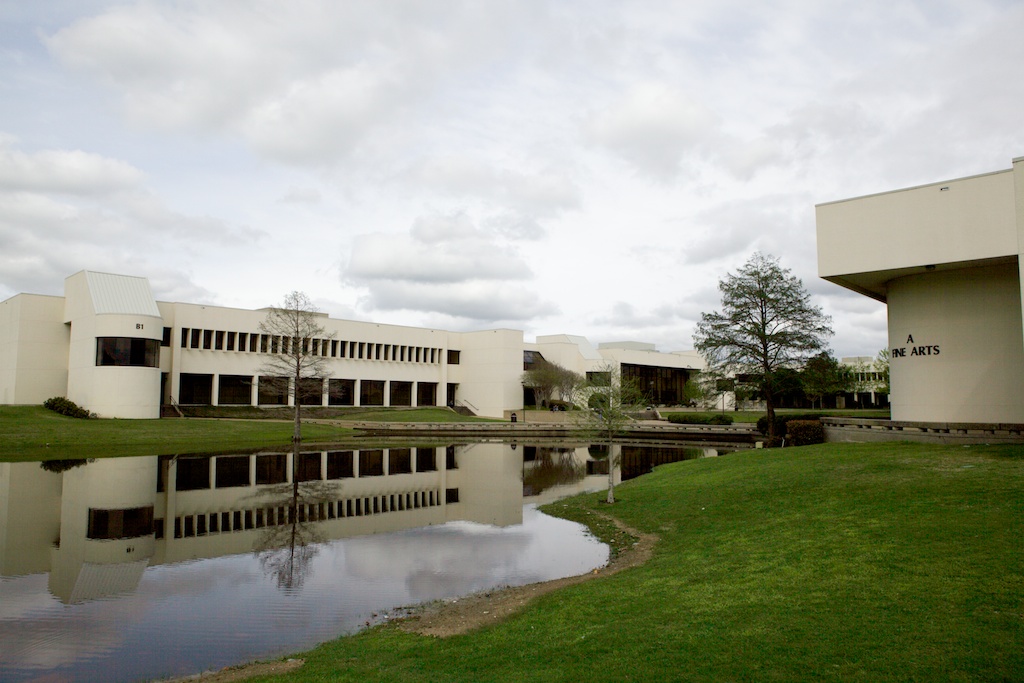 I worked with two groups there — one on “Aurora Awakes,” another on “Undertow” (with a trip back to Allen in between) — and was again blown away by what these students could do. Incredible technique to spare. Do you think these groups have ever won any trophies? Evelio Villarreal has an incredible program.

Back at Allen for the IB (basically, AP) music class. 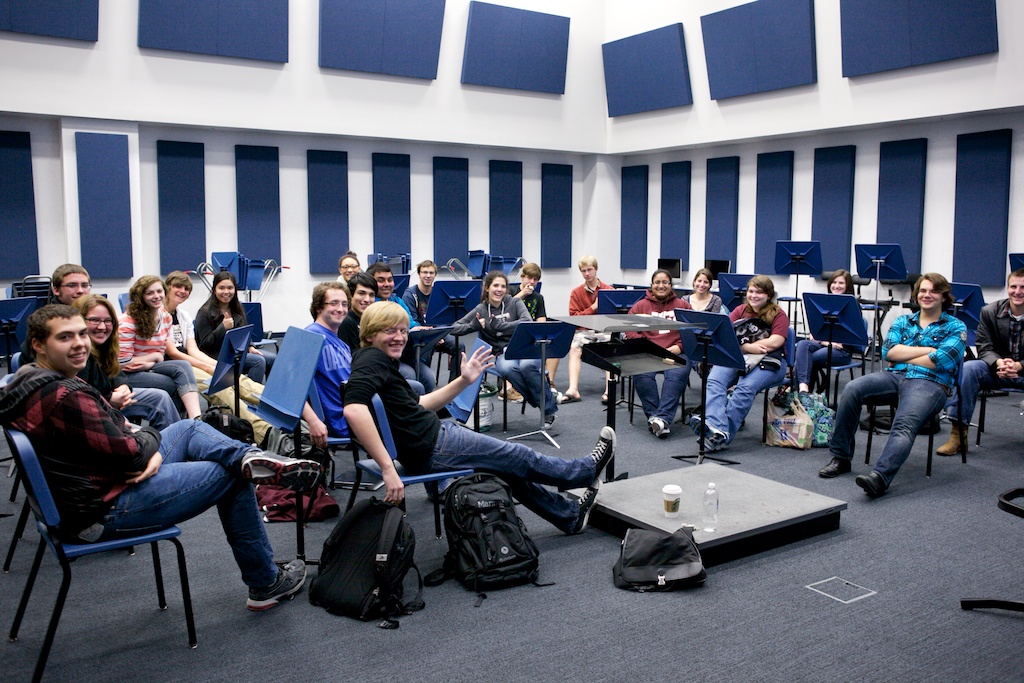 Wednesday, I spent the day in Rockwall, about 45 minutes from Allen and Plano. My first stop was Rockwall Heath High School, where I got to work with two really good bands. Also, a flutist in the band, Alex Martinez, drew this. (Happy belated birthday, Alex!) I had a really nice couple of hours at Rockwall Heath. 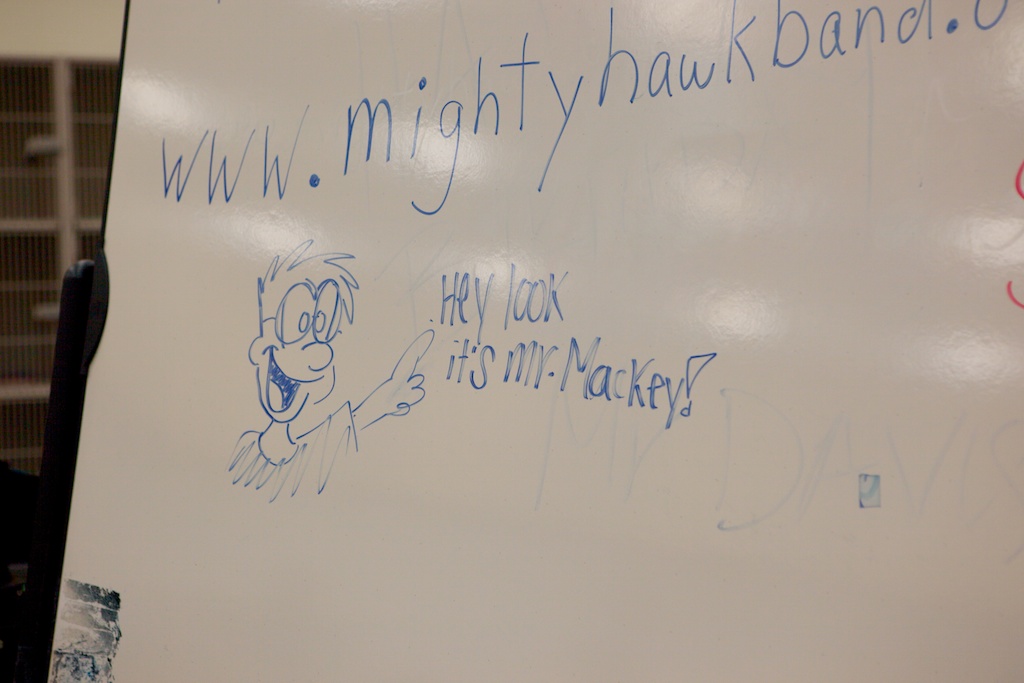 Then, Utley Middle School, where the band was working on “Foundry.” They were so well-behaved and respectful (aren’t middle school kids supposed to be a pain?) — and they played really well. And they were even smaller than I am!  (That was a nice change of pace.) 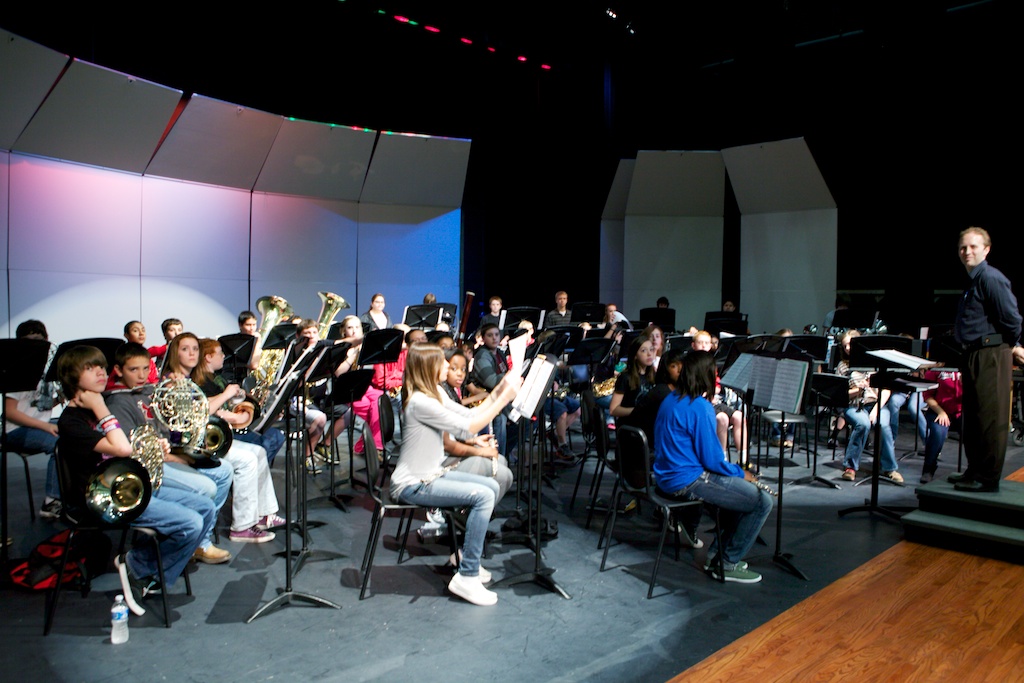 One of the coolest things there was this set of “Foundry Bars,” built by John Thomas, the associate band director at Utley. (If anybody wants to order this “four metals” instrument, you can email John via this link.) The sounds were great. John designed them to sound like the samples on my Foundry page. 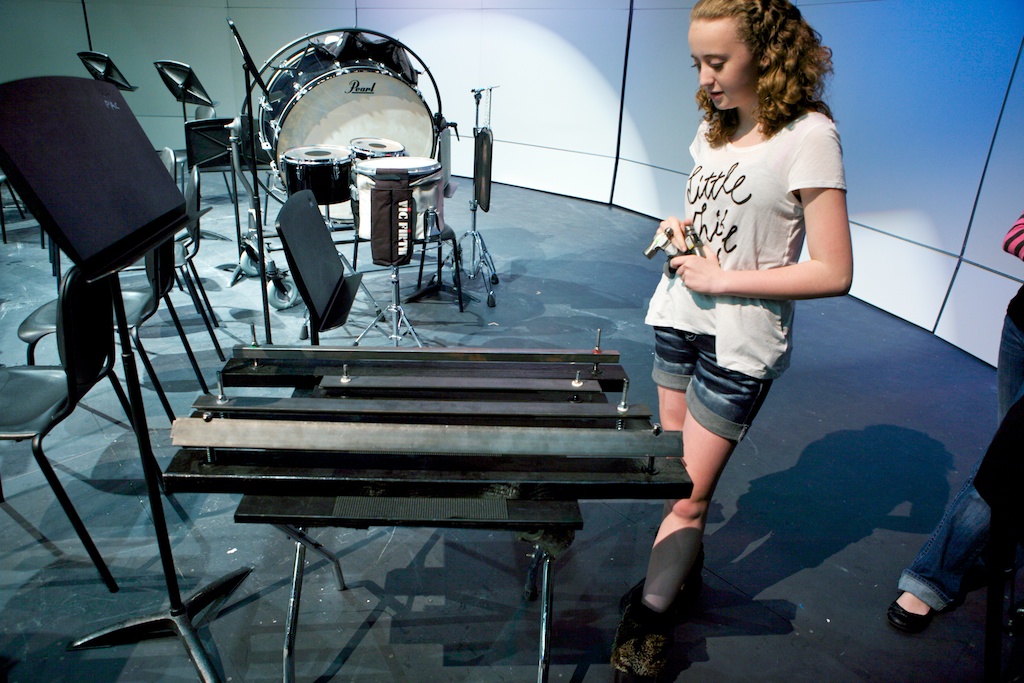 Here’s a video, including a bonus giggle:

A detail of the side. 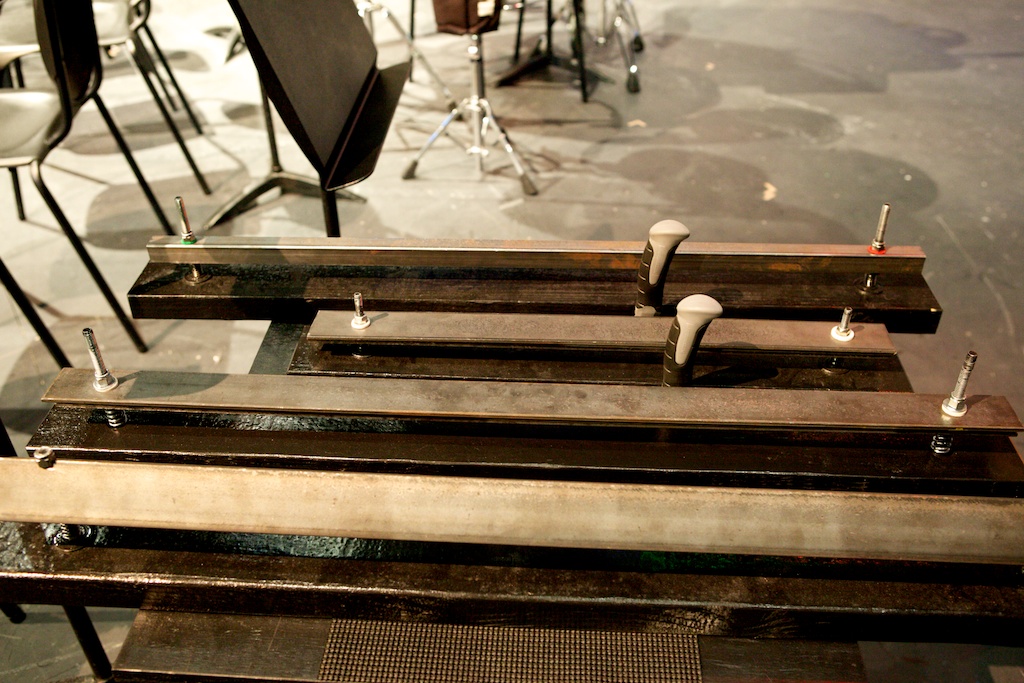 Springs to allow the metal bars to “bounce” for added color. 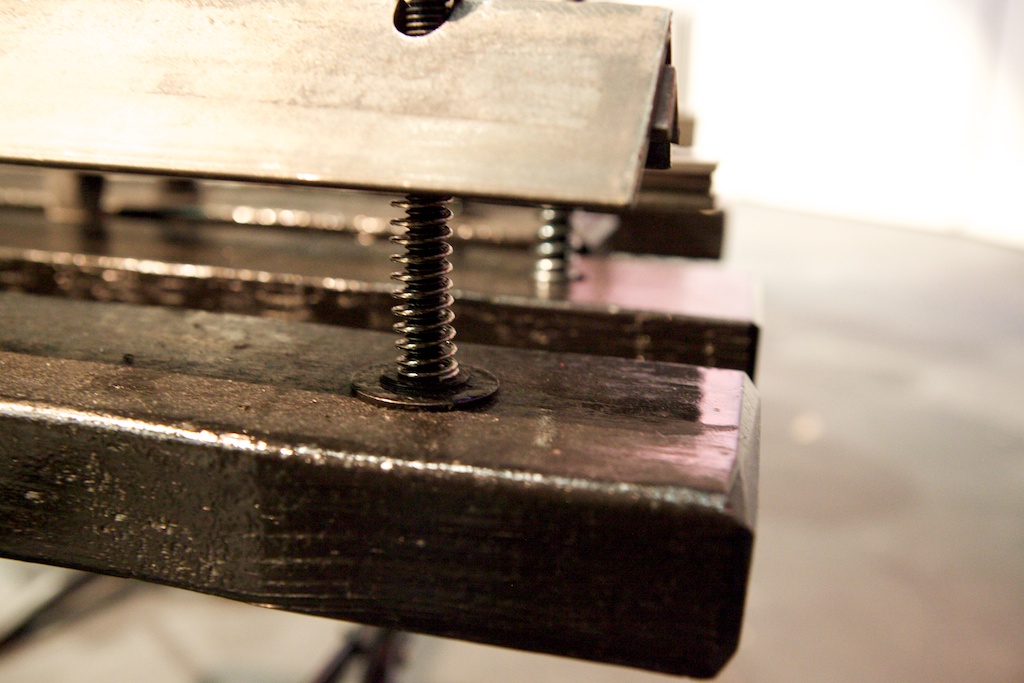 Strike with these small, light hammers.

Next stop: Rockwall High School, with their new Director of Bands, Chris Kosterman. 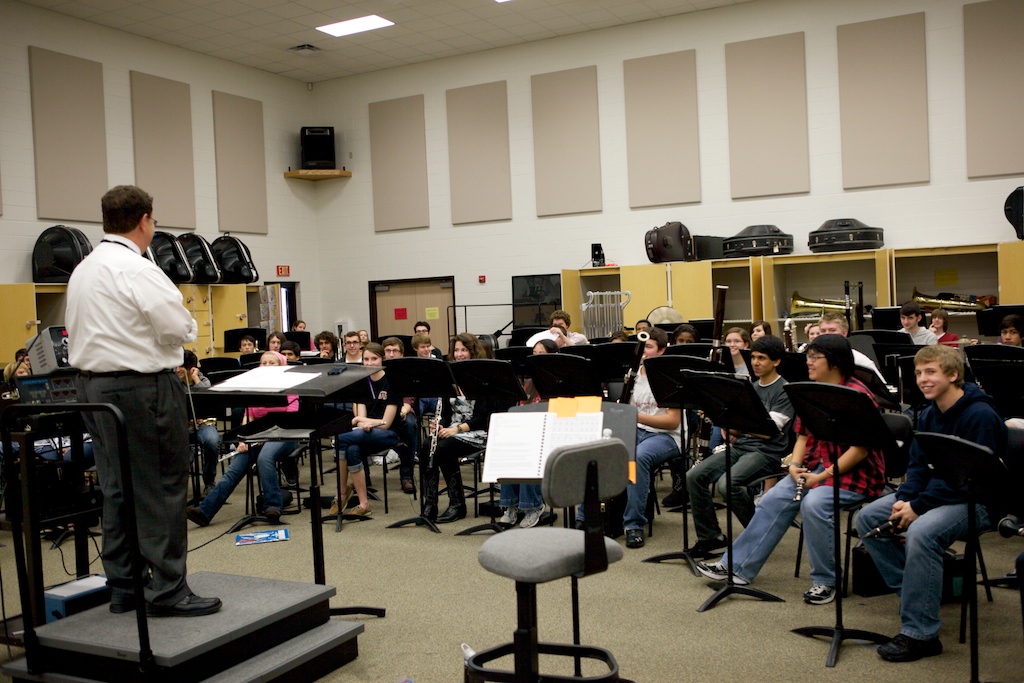 Chris had emailed me to tell me how much his students had enjoyed working on “Hymn to a Blue Hour,” and that they were looking forward to the clinic. He wrote: “My kids will, for the very first time ever, get to see the art of creating music through the composer’s eyes. I hope we can bring your Hymn to life and discover all of its profound message.” I was a little intimidated. I don’t consider myself or my music to be “profound.” I thought I was just supposed to yell at kids who screw up, make a few jokes, and try not to curse. This was seeming like a different thing.

And it was. I have never heard such an earnest and beautiful reading of “Hymn to a Blue Hour” by a high school ensemble, and few college groups have approached what Chris and his students played for me on Wednesday afternoon. I got a tiny bit teary on the next-to-last page (okay, I admit it), and by the time Chris gently cut off the final chord, I was literally speechless, on the verge of losing my sh*t. To give you an idea of the mindset of these students, during the Q&A after the rehearsal, the principal clarinetist had this question: “To me, ‘Hymn to a Blue Hour’ is about loss and mourning, but also about healing. I’m having trouble determining whether my solos are about the loss, or about the healing. What do you think?” I about lost it again, just to hear a question like that about some little ditty that I would have called “Pretty Song in Eb” if AEJ hadn’t come up with the much better title. I spent 90 minutes with the Rockwall band, and I would have stayed another 90 if I didn’t have to rush back to Plano for another great clinic at…

Clark High School! John Mays and his group were doing “Hymn to a Blue Hour,” too, and this was with a band of only 9th and 10th graders. Jeez, what do they put in the water in Plano?! Two Texas All-State players in the clarinet section alone, another in the trombone section, and there may have been more. Just awesome playing. What are these students going to sound like when they’re seniors?! Also, I now have an idea for a sequel: “Hymn to a Blue Flower.”  (This picture is so much cheerier than the blog post about the Asphalt Cocktail bloody performance injuries.) 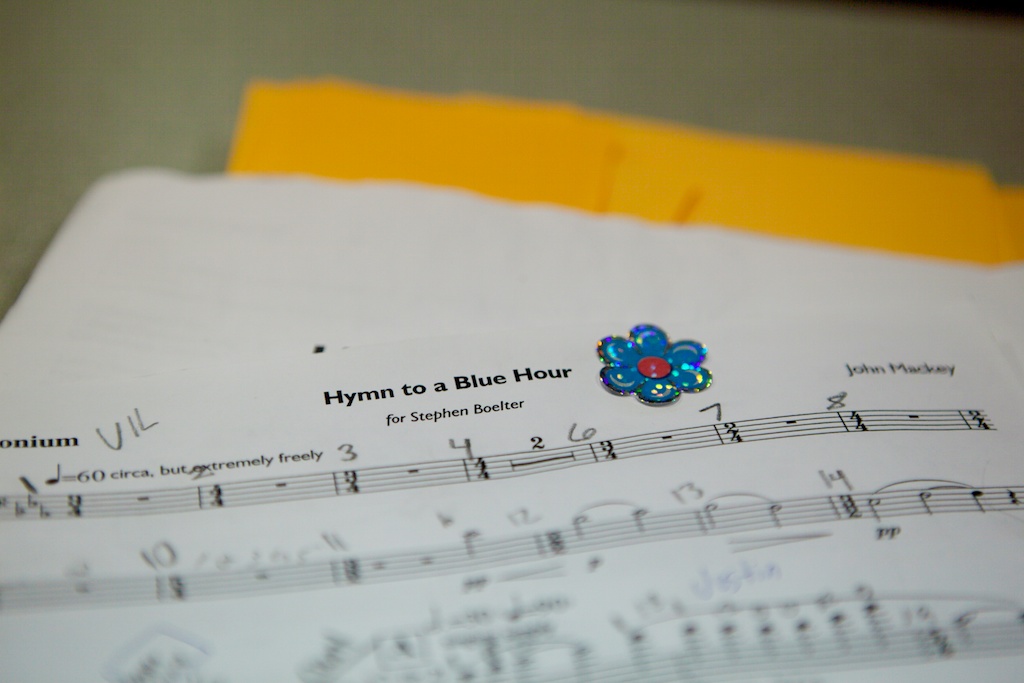 Then: dinner at one of my favorite places in Dallas, Reikyu Sushi & Bar. I started with spicy tuna on crunchy rice. Holy hell – nom. 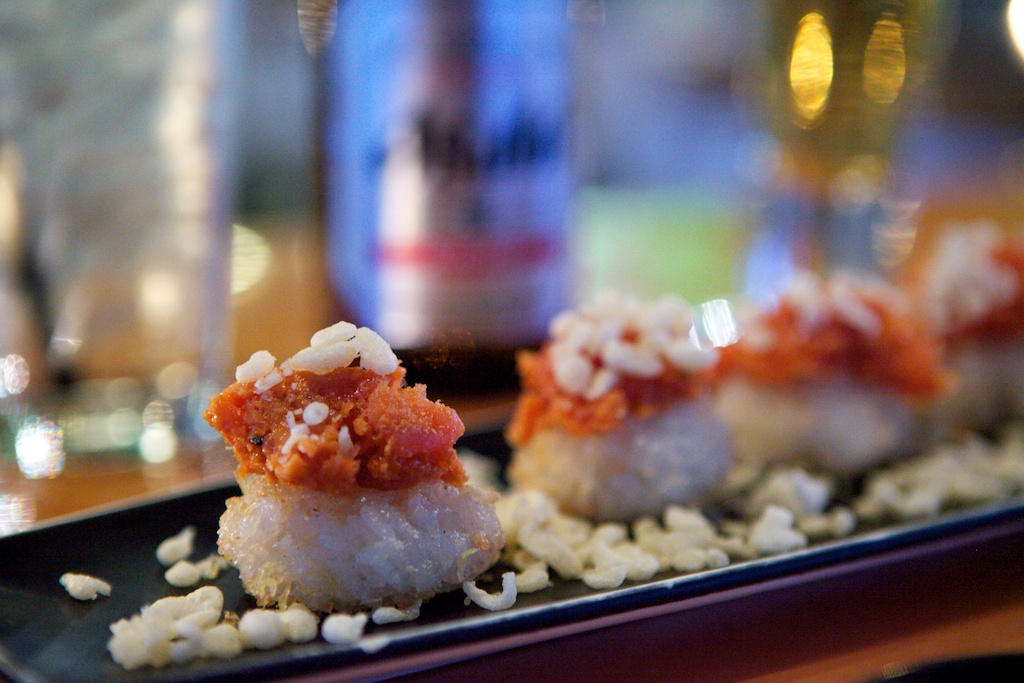 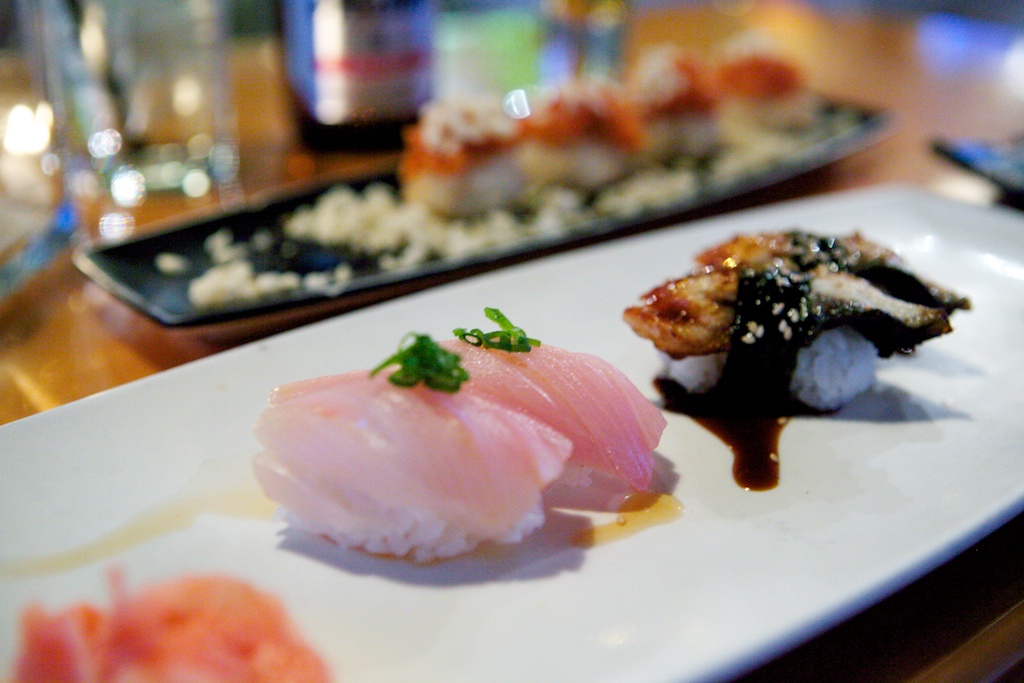 One of those crazy deep-fried rolls with cream cheese in them. Totally not traditional, but yummy.  Just don’t tell my friends in Japan. 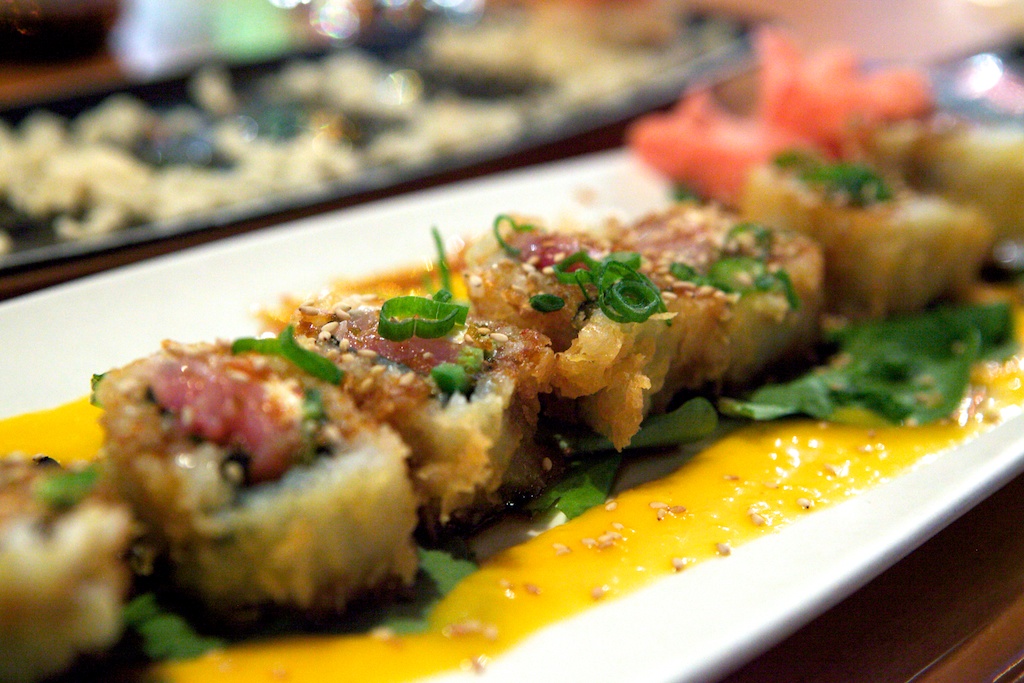 And some albacore tuna. 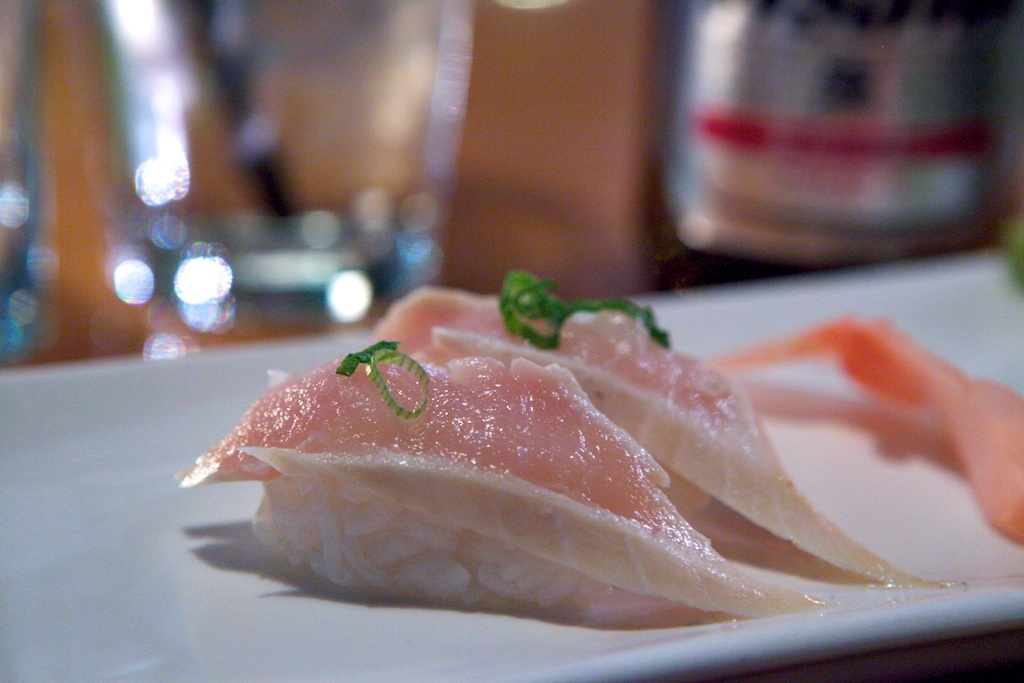 The next morning, I had one last clinic at Allen High School, and then I headed home to Boston. It was pretty exhausting having up to five clinics in a single day, but it’s hard to complain when you realize that public high school band directors do this every day, five days a week, throughout the school year. That is a hard gig.

There are a lot of great bands in Houston and the surrounding area that would probably jump at the chance to take a clinic as well. Maybe make that next year's trip?

Thanks for the info on Advantage car rental. I saw them while on the Enterprise shuttle at Love Field in February and wondered if they might help reduce my monthly travel costs to Ft. Worth for drill. I guess I'll continue my relationship with Enterprise!