Japan, Part 2 : The Concert and Sushi

Here’s part 2 about the trip to Japan. (You can read Part 1, detailing our arrival in Tokyo, here.)

Starving from our train ride, we were treated to lunch in the college cafeteria. We had one of our favorites — Japanese-style curry with rice. Even from a cafeteria, we thought it was pretty tasty. 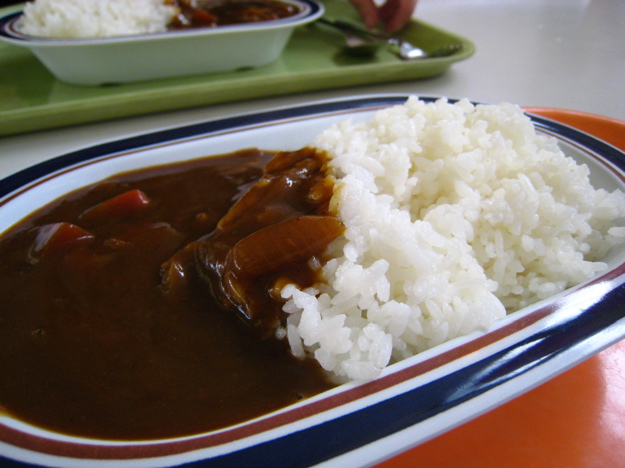 Here’s a shot of the Kurashiki Sakuyo College, the campus that hosted the JWECC (Japan Wind Ensemble Conductors Convention) conference. 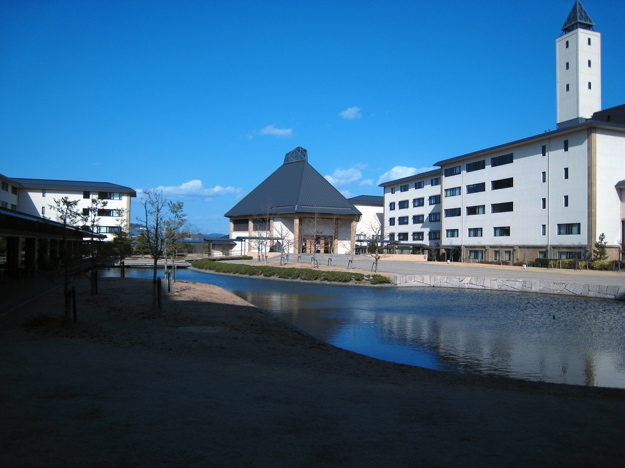 From lunch, it was off to rehearsal. My piece, “Kingfishers Catch Fire,” was commissioned by a half-dozen-plus high schools and colleges in Japan, and the ensemble premiering the work at this convention was an honor band comprised of members of each of the commissioning ensembles. As such, everybody in the band had been rehearsing the piece at their own school in their own band for several months, and what seemed to be the “best of the best” of each band was invited to perform the premiere. The conductor was Ichiro Saito, a frequent conductor of Tokyo Kosei Wind Orchestra, a professional wind ensemble in Japan. The band, to put it mildly, sounded incredible. 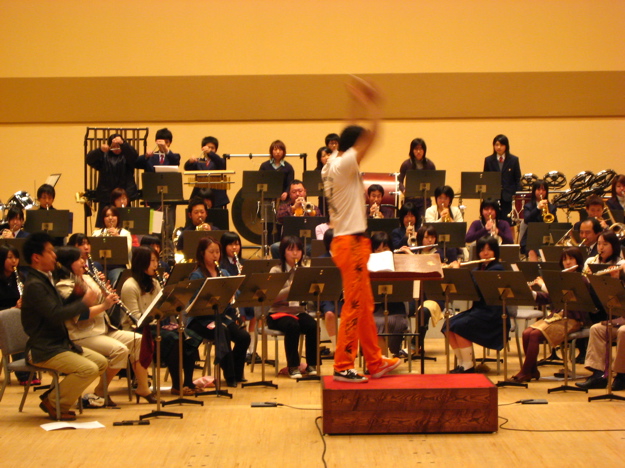 As this was the first time I’d heard the piece — and the first time that Mr. Saito had conducted it! — I expected to have a lot of notes. I kept scribbling things on my Post-It notes and sticking them to the score — “more articulation,” “louder trombones,” “clarinets quieter here” — but every time Saito would stop, he’d say something in Japanese, then run a section again — and he’d have implemented my note without me having to say a word. His instincts were completely in sync with my ideas about the piece. It was great — and a bit of a relief, considering the language barrier between me, the conductor, and the ensemble. 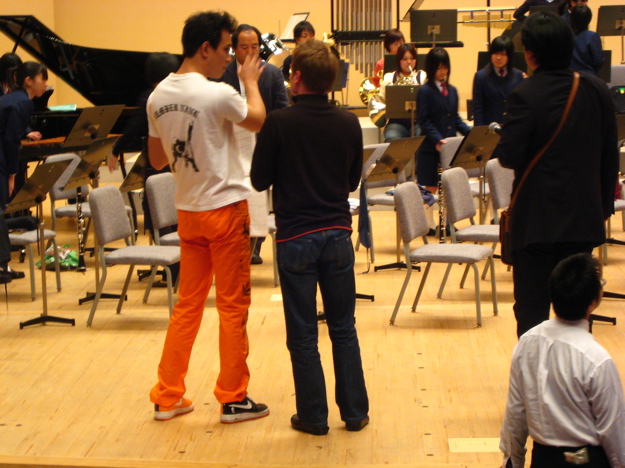 Every time we had a break, I was approached with autograph requests. It was surreal. As soon as I exited the hall, people came literally running with cameras, pens, and sheet music. Sometimes I was asked to autograph other people’s sheet music. No Whitacre this time, but there was some piece called “Dream City” that both I — and AEJ! — autographed. (As an extra-fun twist, if I was busy with an autograph, they’d ask for AEJ’s autograph. It was pretty funny.) 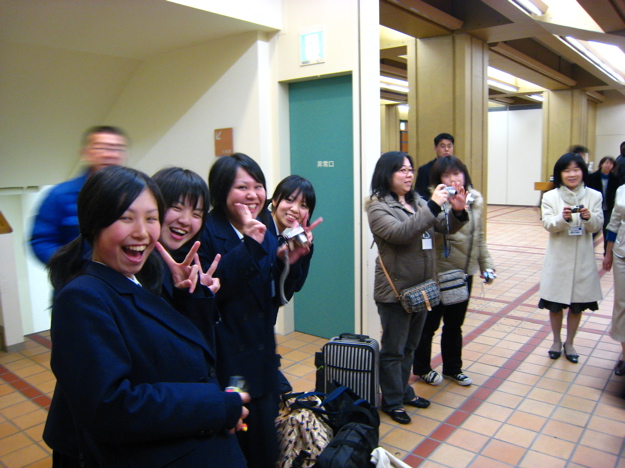 The best, though — and this tops every other autograph I’ve ever signed — was when I was asked to sign this guy’s trombone. At first, I refused. He insisted, though, so… 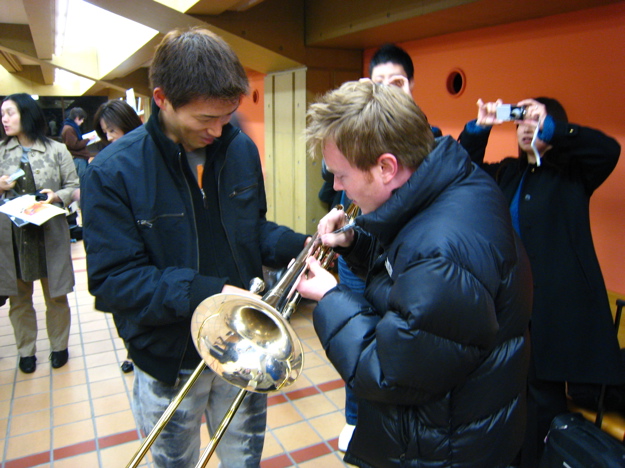 Here are some of our new friends — Omata, Hayashi, Passan, Kanda, Emi, and Chi-taso — huddling and planning something. What were they planning? 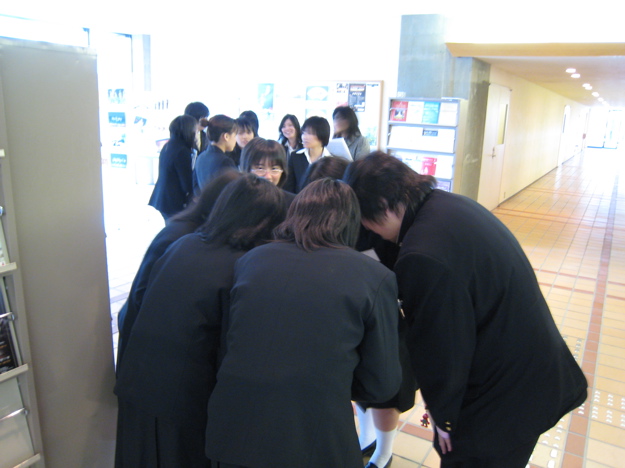 Once they broke their huddle, they sang to me. They sang their parts from “Redline Tango.” It was incredible. It was as if somebody had arranged the last page of the piece for vocal sextet. I’d never heard such a thing. (It works slightly better as a band piece, but damn — this was cool.) Here’s some of the gang — with our new best friend Omata on the far left. (Her English was great, and she was hilarious.) 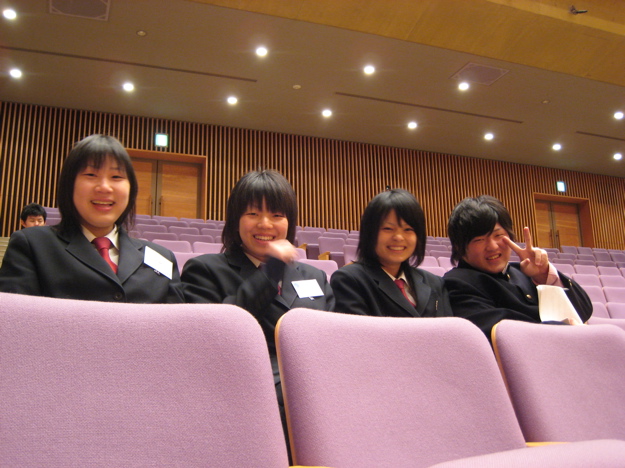 They told us that they had an idea for a movie. It was going to include a monster, a princess, a hero, a ninja, a samurai, a viking, an and an angel. The movie would be called “Monster Hero Peace Movie.” I smell an Oscar. Then, they decided to co-write a story with AEJ. The students wrote the first half (in pencil)… (“One day, a monster lived in a forest. He became grate because he ate a lot of bananas. He wanted to use his special power and wanted to help poor people. After…”) 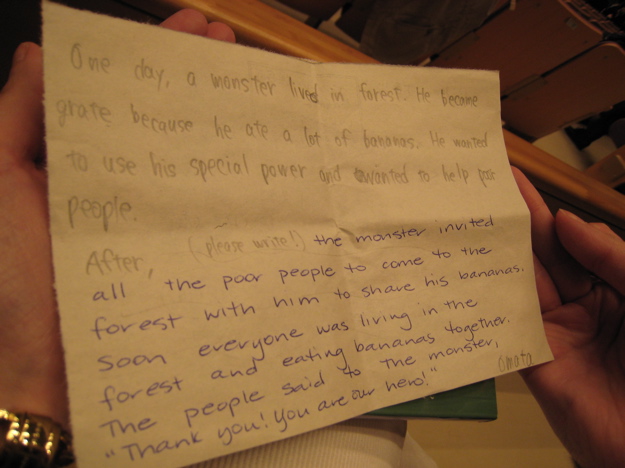 (AEJ continued… “… the monster invited all the poor people to come to the forest with him to share his bananas. Soon everyone was living in the forest and eating bananas together. The people said to the monster, “Thank you! You are our hero!”)

I smell a Pulitzer.

The premiere of “Kingfishers Catch Fire” was the best premiere I can remember of any of my pieces. The piece, 11 minutes long with two movements, is bright and sparkly and ends with huge antiphonal brass flourishes. I couldn’t believe how well they played it. When you consider that the majority of the players were in high school, it becomes almost incomprehensible. I have a kind of mind-blowing recording of the premiere, and I’ll post it in December. (Nobody in the US is allowed to perform it before December, so I’m just going to sit on this one for a while.)

After the concert, there was a party at Tivoli Park, an amusement park in Kurashiki with a Danish theme. (The original Tivoli Gardens are in Copenhagen.) 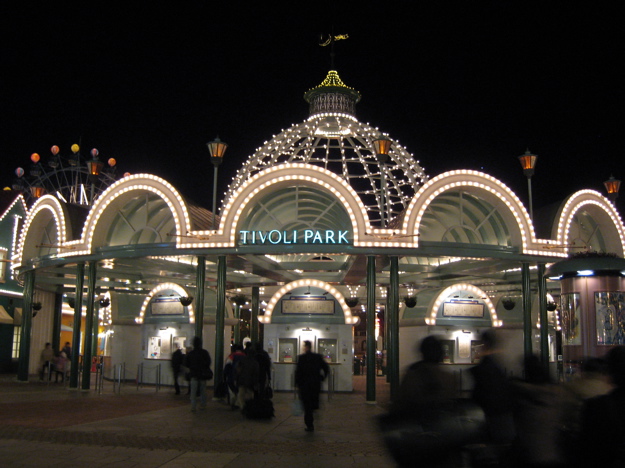 The place was awesome. Imagine a model of a Danish town — but in Japan, with Japanese (and occasionally English) signs. Bonus points if you can spot AEJ. Hint: she’s the only blonde in the entire town. 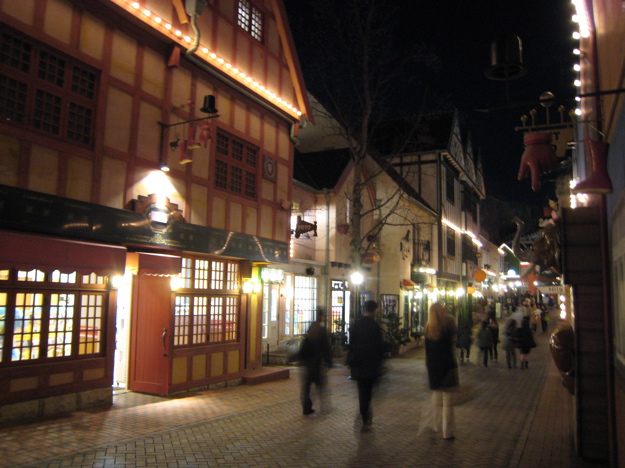 And here I am with Mr. Saito, at the post-concert reception. Bravo, Mr. Saito! 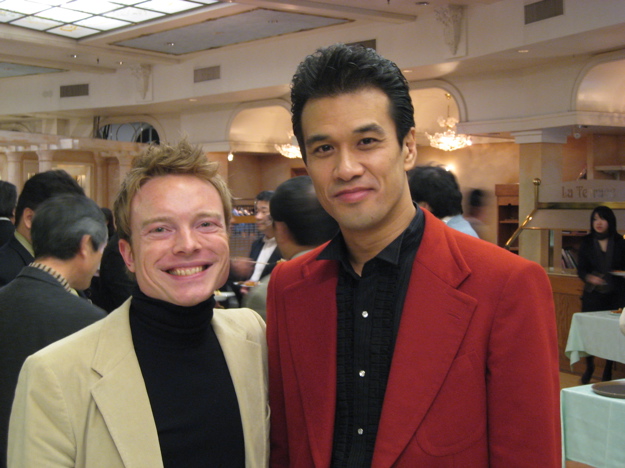 Our hotel was just a block from a cool area that used to be warehouses, and is now a shopping district. It had this awesome store that sold almost nothing but manekinekos (those lucky waving cats)… 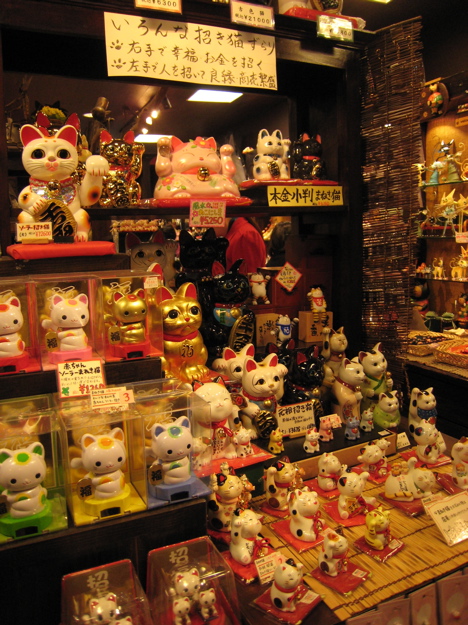 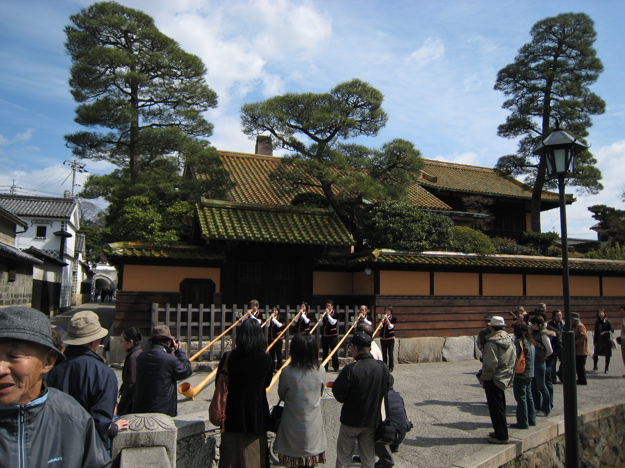 Wait. What was happening in that picture? Were those alpenhorn players?! 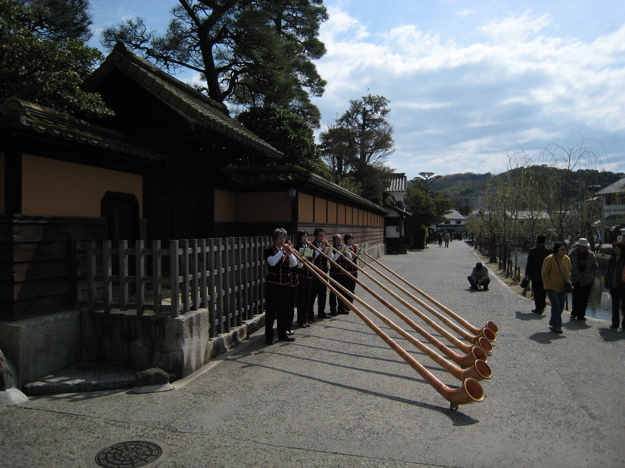 Yes, yes they were. We didn’t understand, but we thought it was fun.

There was this lovely canal running through the village. 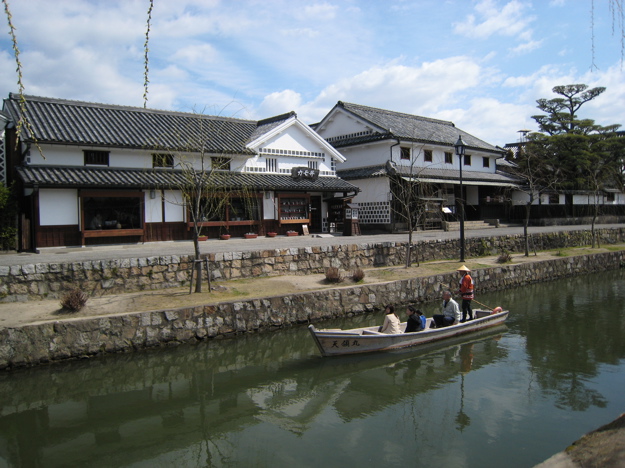 On Sunday (the day after the concert), I participated in a little “Meet the Composer” session. Here I am with my interpreter, Tetsuya Nakayama, a conductor who studied with Eugene Corporon at U. North Texas. 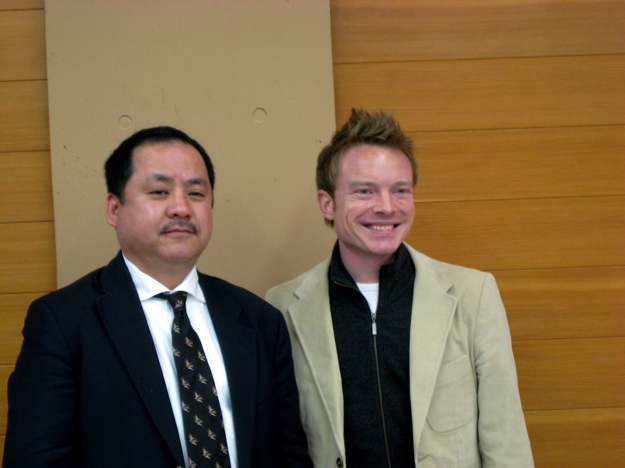 And here I am with my friend Itshi and her awesome shirt. 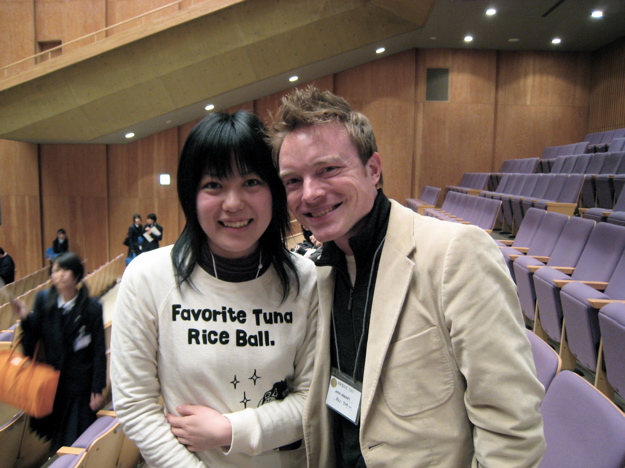 She clearly knew that her shirt was funny, but we did see a lot of instances of not-quite-perfect English. For example, on these handbags. 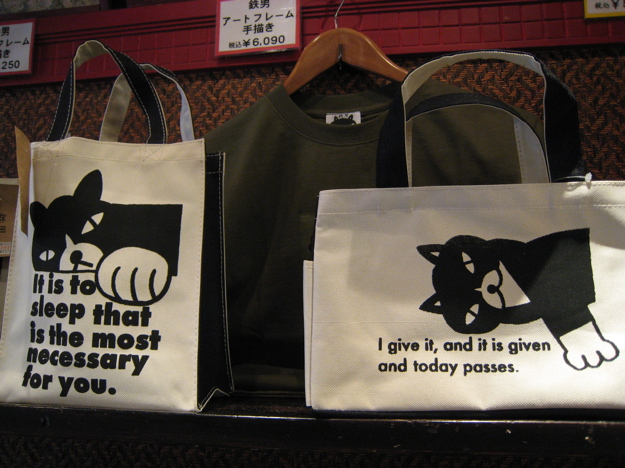 Did I mention the awesome kitty store?! 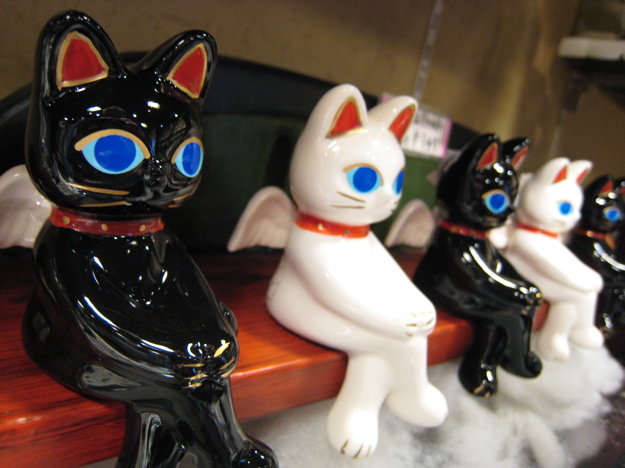 This kitty, though, would benefit from some modesty. 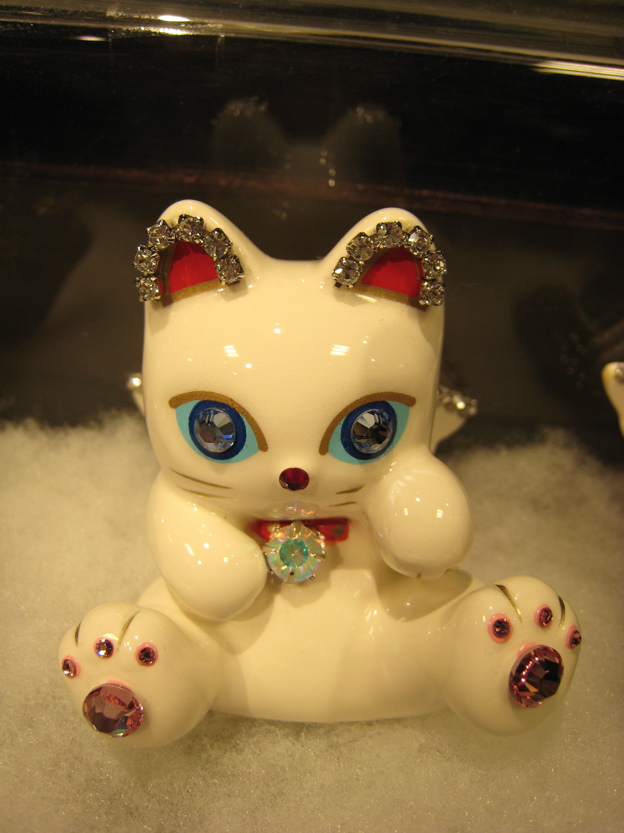 And here I am with all of my new conductor friends. 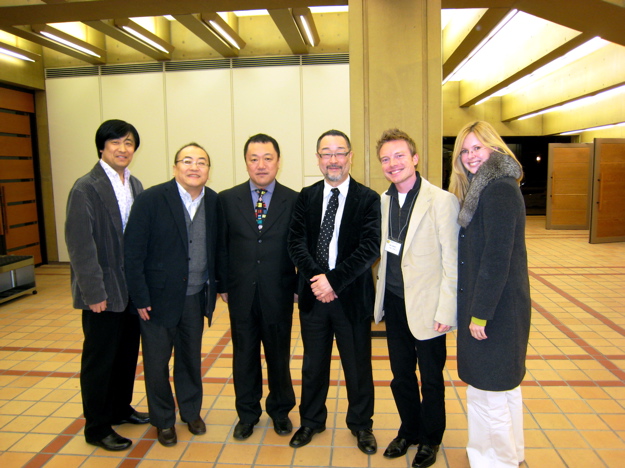 Thank you, everybody, for a wonderful weekend, including not just the performances (among them a kick-ass performance of “Redline Tango”), but a sincere thanks for the night when they all treated us to an incredible sushi dinner. 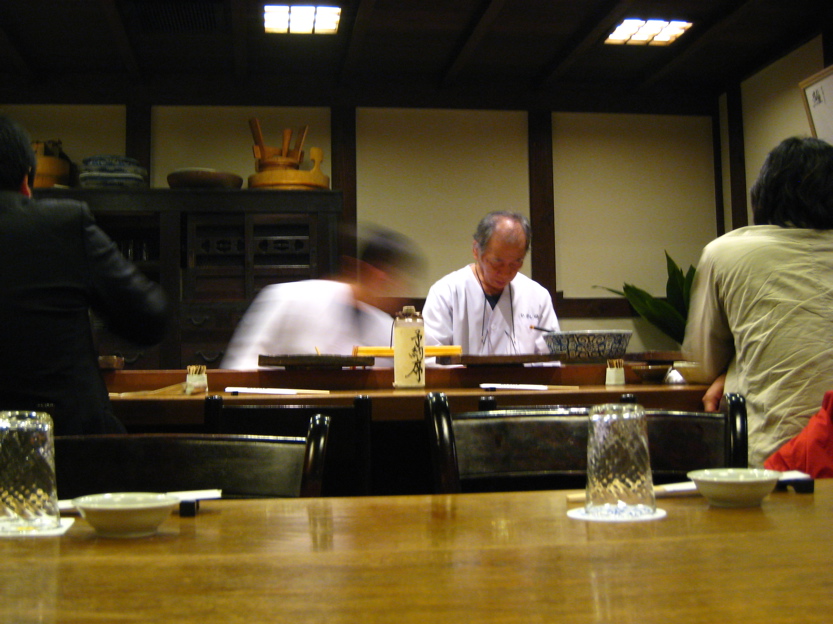 I’d had sushi in America, but to me, “sushi” is tor
o, salmon, tuna, yellowtail — the standards. This was a bit fancier. Here, for example, is (I think) octopus (tako). 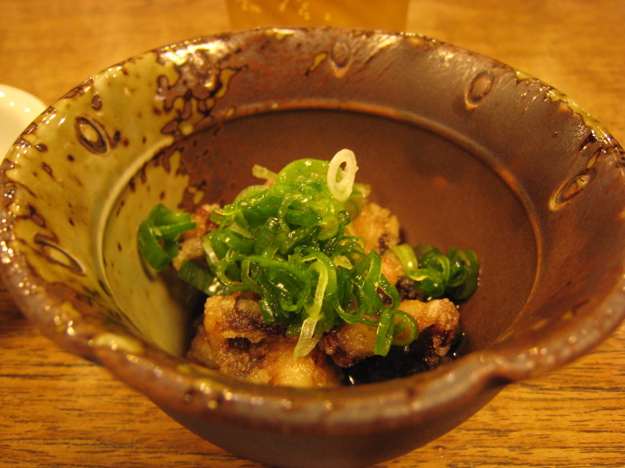 And here is one incredible sushi spread, just for me and AEJ. They were far too generous. We loved it — although raw squid was a little difficult for my American palette (and chewing ability). 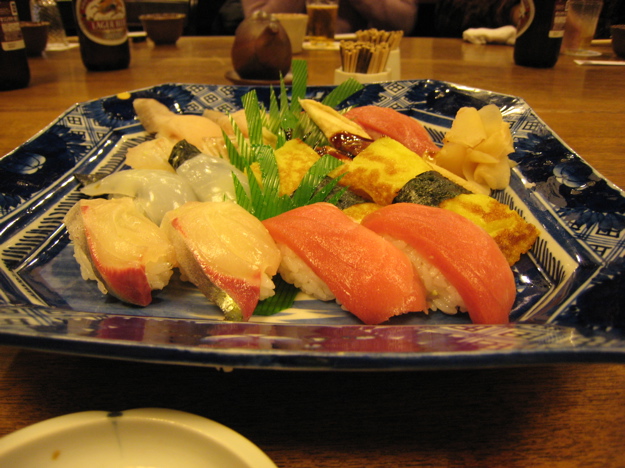 This is soba — basically like buckwheat. Normally you make noodles out of it, but here it is served in its kernel state. 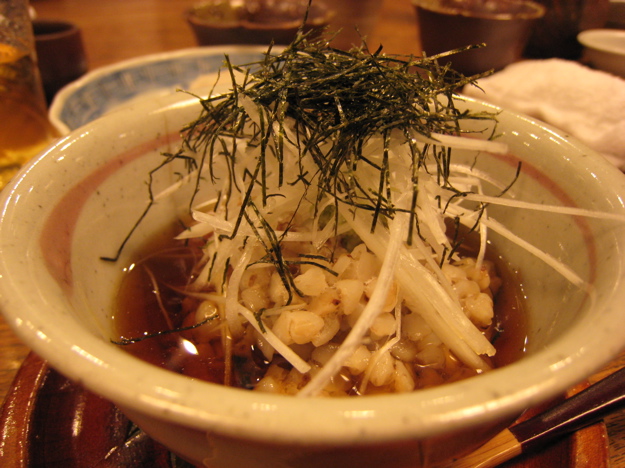 And here’s dessert. It was a spectacular meal. 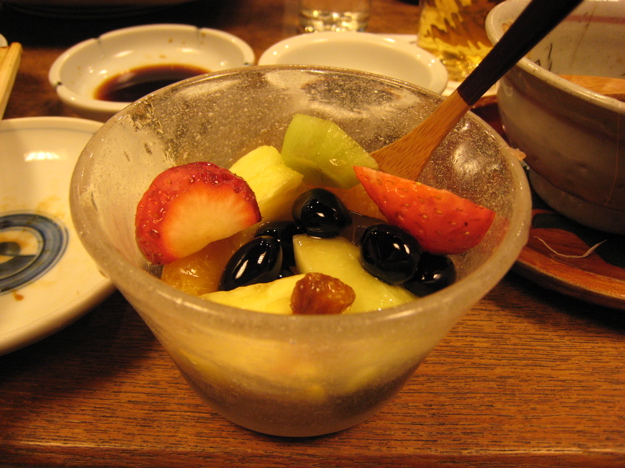 The next night, though — without their guidance — we ended up eating at an Italian restaurant. And I gotta say — it was shockingly good. Who knew?! 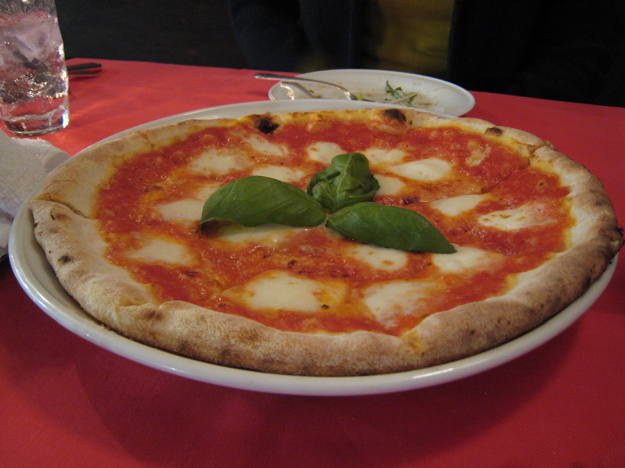 The next morning, we left Kurashiki for Kyoto. And that’s where the pictures truly start to get spectacular…

I have not eaten since late yesterday, and I'm incredibly hungry. I've been craving sushi for the past day or two, actually I'm always craving it. I decided a few minutes ago to "check out Mackey's blog." To my surprise there's authentic Japanese sushi on your blog. I hate you, I envy you, and I love you at all the same time. I'm going to have to drive 30 miles to get sushi now, Thanks Mackey... Thanks.

Far Eastern sentences never translate into English very well--my all time favorite has to be a sign that was meant to say something to the effect of "we apologize for the trouble while we are under construction" actually came out as "A CONSTRUCTION SITE IS TROUBLE FOR YOU, EXCUSE".

The Japanese saw in you what I've seen since I met you - You're a Rock Star!!
~C

Nothing like sushi in Japan. And the "Favorite Tuna Rice Ball" shirt-- ditto, it's brilliant!