How I Spent My Teen Years

Whenever I do a Q&A with a band, inevitably somebody asks me:

“What instrument do you play?”

When I answer, “none,” there’s skepticism, and then the logical follow-up question, “how did you get into writing music if you never played an instrument?”

The answer is that I have always used a computer – from the time I was really young.  My grandfather was an amateur musician who played clarinet, oboe, and flute in community orchestras – and in the Army years before that – and who, as a career, owned a music store and repaired instruments.  One afternoon, when I was about 11 years old, he showed me how to write music using a music program on his Apple IIe – a program called Music Construction Set. You’d grab rhythmic values from the bottom of the screen, drag them to the piano staff using a joystick (yes, a single-button, Atari 2600-style joystick), and then press “FIRE” on the piano icon, and your music would play.  Here’s one of the original demos from that software:

I had nothing to do with that demo, so I can’t take credit or responsibility for the ending!

My dad got me a Commodore 64 for my birthday that year, and I got my own copy of Music Construction Set for Christmas, and started writing music. I mean, “music.” It was awful, and none of that earliest stuff survives.  The software was incredibly limited, as you can see from the above example. It couldn’t play triplets, unless you wanted what I call “marching band triplets” – dotted-8th, dotted-8th, 8th. Sounds and tempo had to be consistent throughout the piece, and – worst of all – so did time signatures! I’m still trying to right that wrong with pieces like “Wine-Dark Sea.”

Before long, I got a new program called SidPlayer.  This program allowed much more control over the three voice sound chip in the computer. (Yes, I was limited to only three notes at a time.) I could change meters, tempo, and sounds. I could approximate articulations or vibrato. I could “fake” a crescendo by programming a slow attack value for a note. As an 11-12 year old, it felt like I could do just about anything.  The editor looked like this: 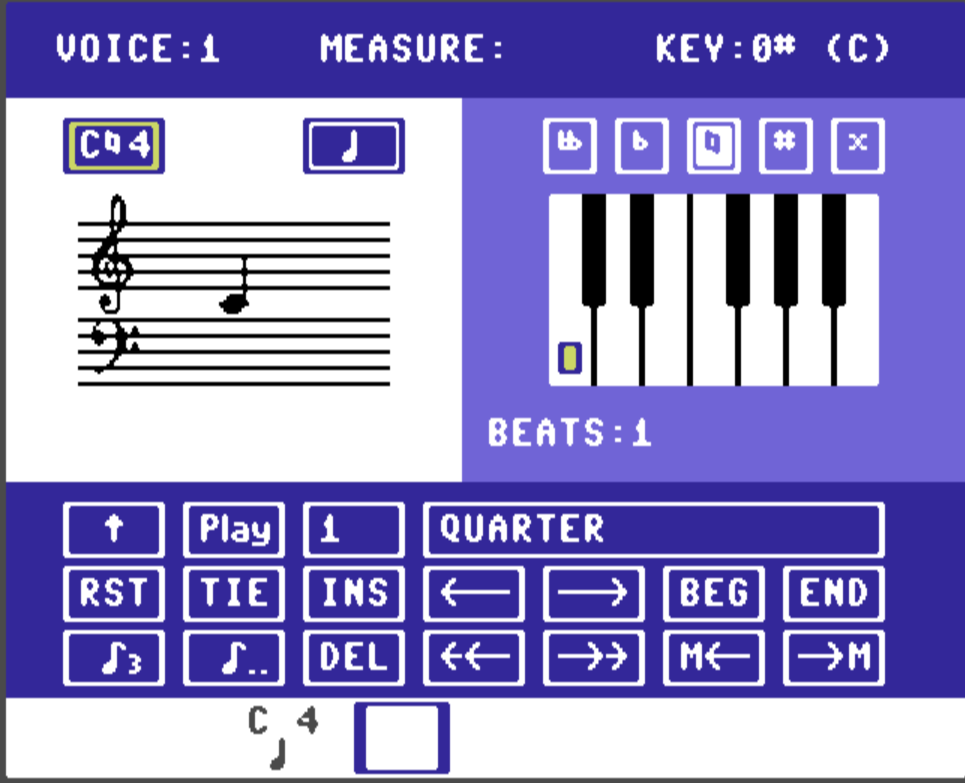 Mostly, at that age, I didn’t write my own music – but I did write some.  Here’s my earliest piece.  There was apparently something before this – I indicated this was “opus 2!” – but in my memory, this was really the first piece. (Maybe “opus 1” was everything I wrote in my early pre-12 years?) I wrote this for my grandfather (intending him to play the clarinet part). The movie “Amadeus” had just come out, and I was obsessed with it, so I wrote a “Lacrimosa.” I seemed to think it was in Bb minor because the key signature had 5 flats, but it’s in Eb dorian. Go easy on me – I was 12 (and no Mozart). Also, I have no idea why I didn’t try to make the “clarinet” sound like a clarinet.

It went on a little from there, but you get the idea, and there’s no need to make you suffer through more of a 12-year-old’s idea of angst.

Here’s a piece I wrote in 8th grade, when I was 13 years old.  I still kind of like it – especially for being by a 13-year-old dork.  Abby thinks I should use take this tune I wrote in middle school, transform it, and use it as the tune for a middle school piece I’m about to write. I think I just may do that. I kind of love the idea of a piece for middle school kids using material written by the composer when they were actually in middle school.

When I wasn’t writing my own music (or “music”), I went to the library and checked scores out, took them home, and painstakingly programmed that music into the software – again, using a joystick.  In SidPlayer, you’d edit one voice at a time – you couldn’t see the other voices while editing a voice. That’s probably why I write so many ostinatos now (and why my publishing company is Osti Music) – because it was easier to keep a repeated figure in my head while I wrote a new layer on top of that layer (being unable to actually hear the first layer while writing the second).  I mean, you hear nothing but loops in that above piece.

So I’d select a voice, slide the joystick up or down a piano staff until you got to the pitch I wanted, move the joystick left or right to select the rhythm, then press FIRE and the note would be entered.  Repeat. Repeat. Repeat.  Imagine doing this for a three-part Bach fugue, and it’s not so bad:

(That’s maybe my favorite Bach fugue – largely because of the jazzy little ending.)

That 2 minutes probably took a day to enter – and I programmed all six Bach Brandenburg Concertos this way.  (That link is to my arrangements of the complete Brandenburgs. You’ve been warned.) That alone is about 90 minutes of music.  It never sounded “good,” but it was an incredible way to learn about music — voice leading, transposition (since I had to manually transpose the instruments – and those Brandenburgs had some unusual horn and trumpet transpositions), and arranging (since I had to reduce pieces to 3 maximum notes at once).

I programmed a ridiculous amount of music into this software. The last movement of the Dvorak Cello Concerto. The complete “Peter and the Wolf” by Prokofiev.  The first movement of the Haydn D Major Piano Concerto. The complete Barber Violin Concerto, and the first two movements of his piano concerto – and the Adagio for Strings. (You haven’t truly felt pain until you’ve heard an 8-bit computer playing Barber’s “Adagio for Strings” as interpreted by a 15-year-old.) I programmed most of the Poulenc Gloria. I even programmed the complete “Pictures at an Exhibition” by Mussorgsky. Yes, it sounded awful, but it was fun, and without trying, I was learning a lot about music.

I mentioned that the Commodore 64 could only play three notes at a time.  I eventually got a SECOND Commodore 64, hooked one up to each of the two stereo channels on my receiver, hit the space bar on both at the same time, and got SIX GLORIOUS 8-BIT SOUNDS AT ONCE!  Shortly thereafter, a cartridge became available that contained a second sound chip, so everything could be done with a single computer. WOW! Six notes at once on ONE COMPUTER!!!

Here’s the first movement of Leonard Bernstein’s “Chichester Psalms,” as sequenced by me when I was probably 15 or so. Does it sound good? No, it sounds awful. Plus, I was working from a piano reduction, which assigned the bongos to pitches in the piano part – so I programmed those pitches. But this is the piece that taught me about 7/8.  (So, you can blame Bernstein for most of my music.)

Here’s the second movement of Samuel Barber’s Violin Concerto. It’s gorgeous music – but you wouldn’t know it from this. But you can hear that I was trying to make it sound a least a little musical, adding programmed rubato all over the place. And if you’ve heard my piece “Hymn to a Blue Hour,” you’ve heard the piece of mine that is essentially a huge rip off of this piece.

So when somebody says, “this is how you spent your teen years? Not chasing girls, but this?” I have to admit, “I tried chasing girls. They were not interested. So I spent a lot of time playing with my joystick.”

This makes me giggle.
As one of my other old HS friends pointed out to me, we were clueless in HS. There were more girls interested in you than you realized, John. I seem to remember several friends of mine going all doe~eyed when you were around.
But, it all works out the way it is supposed to in the end. :)

Loved the barber! One of my favorite pieces and it was so awesome to hear it in that way, see you at TMEA!

Loved the barber! One of my favorite movements ever and was awesome to hear it in that way, see you at TMEA!

When i was in middle school/a freshman in high school (06-09) i had this midi guitar tablature program called tabit. its website a lot of people would post tabs every day of not only tab outs of classics and random tunes and dittys and all sorts of things (with midi guitars and way more than all you had of course). The almost forumy culture of that website and how simple it was and so many things getting posted and the rating system, it had a serious impact on my development as a songwriter and i definitely relate to. the site now is dead but this post has made me redownload the software and listen to all my old weird stuff. great read.

I feel like we all have these kinds of stories. I remember when I first got Finale Notepad 09. I wrote probably thirty bassoon duets because I like bassoons. I did the same for trombones and violins and basically every instrument I didn't understand. It is really strange to stop and look back at all the old stuff, genesis. I remember rewriting the Jurasic Park and Harry Potter themes (was a big John Williams fan) for various instrumentations just to see what it sounded like. And though I would like to say I've matured as a composer from middle school until now, at the end of the day I'm still just a kid fucking around on his laptop. But I guess I still have plenty of time to grow out of that!

Hors Concours sounds exactly like, and if I may hazard a guess, might be just a little bit influenced by 80s arcade music. Theme from an imaginary horse racing game? (I'll get me coat.)

Okay, this peek into your early years is interesting, but 6 months ago you promised photos of your house renovation. Come on!

Your story reminds me a bit of how I ended up training my ear (almost 'perfect' pitch). Strange musical things happen to 10-14 year olds.

Which would you say your favorite instrument is?
I've listen to your incredibly characteristic music lately and I'm stunned that you're able to use every single instrument in the ensemble so well!
Do you have a favorite at all?

Such an interesting and inspirational story of how you got into composition! I try to compose a few things as well but they certainly don't come close to the quality of your music. Really hope I can write a song that's anywhere near half as good as anything you've ever written one day!

That last line was perfect. I know what you mean.

As a young composer myself (19), I find this very inspiring and motivating. Lots of my music is inspired by by what you write and how you orchestrate chords. I'm a very big fan of dissonance. I find it more beautiful and intriguing than regular 1-3-5 chords and other basic chords.
Reading your story really gave me a boost!