I know it’s been awhile, and it seems like all that’s happening here is home remodeling, but but it’s time to get back to work and write some music. It appears that the funding is coming together after all, so the next big project will be the Trombone Concerto that I’m writing for Joseph Alessi, principal trombonist for the NY Philharmonic.  Joe will premiere the piece with the band at West Point, and also with the Ridgewood Concert Band in New Jersey. Where he’ll take it after that, I don’t know, but I guess it depends largely on whether he likes it. The piece is commissioned by 20 high school, college, and military bands, so it should (hopefully) get a lot of play over the next 18 months. Step one, though, is to write the thing.

AEJ and I have been working on the overarching concept for the concerto, and I think we have a great idea.  (AEJ was the one who conceptualized the Sax Concerto’s structure, and we collaborate on all of my pieces. She also comes up with titles for almost all of them — Aurora Awakes, Kingfishers Catch Fire, and on and on. And when I say “we” have a great idea for this concerto, what I mean is “she came up with a great idea, and I’m going to use it.”)

The piece will be based on the dual nature of the Greek god Dionysus.  As the god of the vine, Dionysus is famous for the ecstasy he could inspire, but he was also subjected to a cycle of agonizing death before glorious rebirth each year, analogous to the harsh pruning and long winter the vines endure before blooming again in the spring.

The concerto’s movements would represent this duality.  The first movement would be brutal, with the god’s agonizing cries as he’s torn to shreds by his own worshippers.  (AEJ suggested that these worshippers might be represented by the trombone section, with their voices sounding like a fiendish parody of the soloist. I love this idea — and of course, it’s not my idea.)  This brutal agony would be followed by the stillness of death (either as a slow central movement, or possibly just an extended ending section of that first movement; I’d see how this was pacing itself before making this decision).  The final movement would represent Dionysus’s glorious rebirth, as he rises again, bringing the ecstasy and liberation that have been celebrated in his name for centuries.

There are all sorts of strong directions this could take, with Dionysus being not only the god of wine, but also the god of theater, grapes, ritual madness, and ecstasy. It’s a crazy combination. I should call the movements “Ecstasy,” “Ritual Madness,” and “Grapes.” Then again, maybe not, but “Ritual Madness” ain’t bad.

So the overall idea is that Joe Alessi represents a Greek god — one who is brutally destroyed in the first movement only to be reborn — with incredible joy and beauty — by the end of the concerto.  The first movement would be harsh, angular, and energetic, sort of along the lines of a mini-Rite of Spring.  The middle would be melancholy and still and (probably) mostly quiet.   This middle section would either come from the first movement, or lead like a huge transition directly into the third section.  (This is a big question — is it one straight-through piece, or two movements, or three? There are three “big picture” ideas I want to evoke, but how are they broken up?) The final section would be an arching explosion of joy — along the lines of the second movement of “Aurora Awakes.”

What’s better than portraying Joe Alessi, arguably the greatest American trombone player ever, as a Greek god?!  This concept would allow for an almost operatic treatment of the trombone — something that’s really appealing to me.  Here is this god who is initially strong, only to be destroyed and then come back stronger and more beautiful than before.

I’m loving AEJ’s idea. Now I need to give it some thought to figure out how to put it all together. Three movements? Two? Which movement should I start writing first? Should the entire piece by cyclical, sharing material between the beginning and end of the piece, but giving the material completely different treatment each time? My first though on that question is “yes.” Does this mean I should write the last movement first? Maybe.

And just because it doesn’t feel like a blog entry without a photograph, no matter how random, here’s a picture of Loki in his beanbag, taken with the 85mm f/1.2 L lens.  I think this might be for Loki’s Christian music album cover. 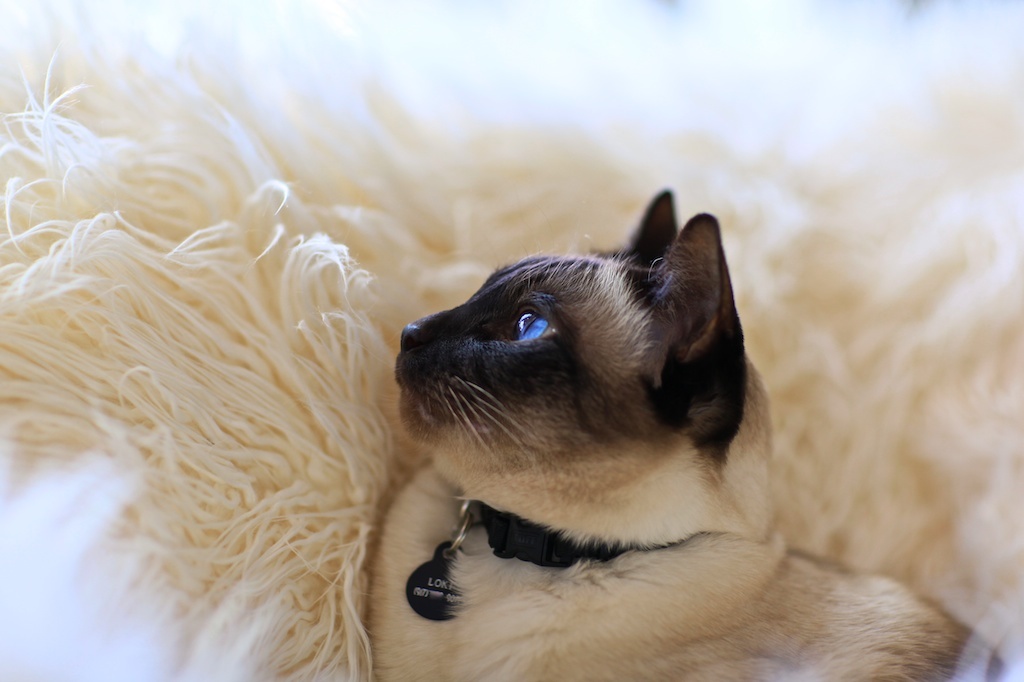 Good luck with the new piece. You guys make an amazing team! It's *very* cool to read about how you collaborate.

I know you're nowhere near titling the piece--but if you want public schools to buy it, you probably want to avoid titles "Ecstasy" and "Ritual Madness." After writing/editing textbooks for over 15 years, I'm sadly aware of taboo words/subject areas that make a product unbuyable with public funds in places like Texas and the bible belt. It is ridiculous but true. . .

3. The concept sounds amazing. I am super jealous this.

The concept sounds fantastic. If you haven't already, you should listen to the concerto Christopher Rouse wrote for Joe Alessi. The second movement has some pretty brutal sounding writing for the soloist vs. the trombone section. I am extremely excited to hear your piece.

John, on the road right now. Very exciting. I want to email you some stuff. I don't have your email with me. Please email me your email address. Thanks Joe Alessi

Let's try this again with my name spelled correctly

John, on the road right now. Very exciting. I want to email you some stuff. I don’t have your email with me. Please email me your email address. Thanks Joe Alessi

I'm one of the trombonists over at Cabrillo from a few summers ago. Hoping we can play a piece of yours again there soon. I stumbled upon this blog entry from a link someplace else and I'm very excited to hear you're writing a trombone concerto for Joe--I know it will be a great addition to the repertoire.

I'd thought I'd let you know that we Cabrillo folks have gotten the Grand Rapids Symphony to program Red Line Tango for the coming season--you can see it here: http://www.grsymphony.org/events/concerts/beethovens-fifth-symmphony/

Hope all is well, and I look forward to seeing you at Cabrillo sometime again in the future!

Hey John, Great piece, just came back from the Ridgewood band. So dynamic and had such amazing emotion. Also, Great Job Joe, you nailed it.

We played your piece, Strange Humors and I really enjoyed it.

As a fellow trombone player I am looking forward to hearing this new piece.

This was such a great read. I'm a young composer mostly for media, but I was googling about how to get published for concert stuff, came across your blog post which Eric Whitaker reposted on his site, and then found your blog. It's so cool that you are sharing about the writing process before you even finished the piece. Thanks so much for sharing the great info and insights! -Jonathan