Demo on the old kitchen was just over two weeks ago, and my last update was over a week ago.  At that time, the contractor had just started mudding and taping. Here’s the space once that was finished. 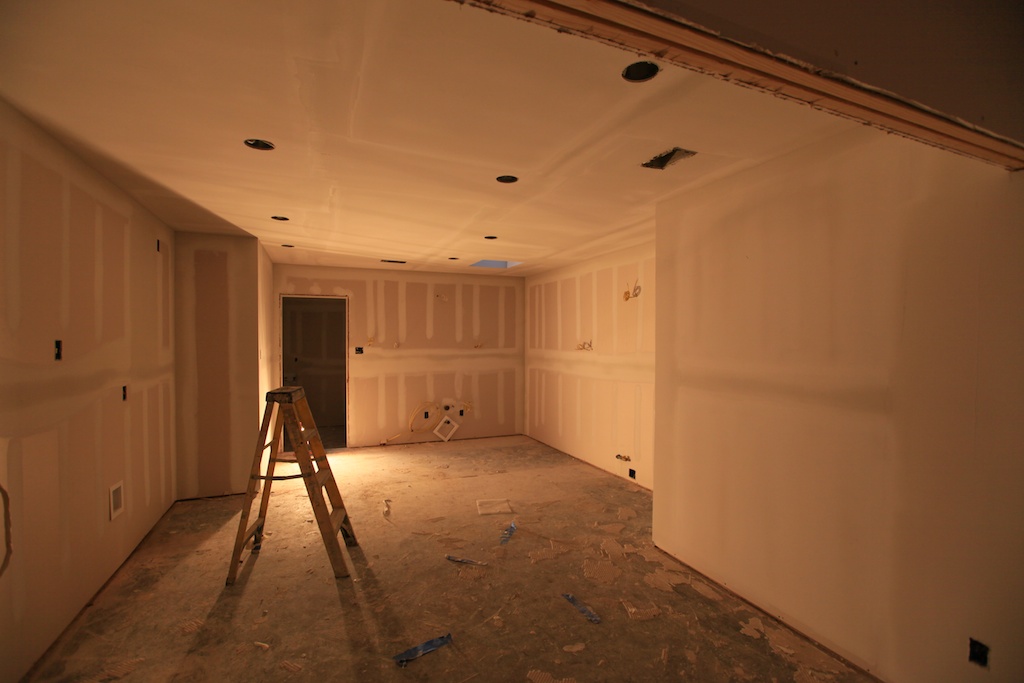 Over the course of the next week, they dug a 4″ deep trench through the concrete slab and buried electrical wiring that would eventually be installed in the new island. I was lucky enough to be in Virginia during the jackhammering (I was there for the premiere of Aurora Awakes), but poor AEJ and Loki were stuck in the house for two solid days of noise and dust. Oh, and lots of plastic tenting, because the contractor was also painting the ceiling and the walls. (Steve Bryant described the house, wrapped in plastic, as looking like the end of E.T.) When the plastic came down, the kitchen looked like this. 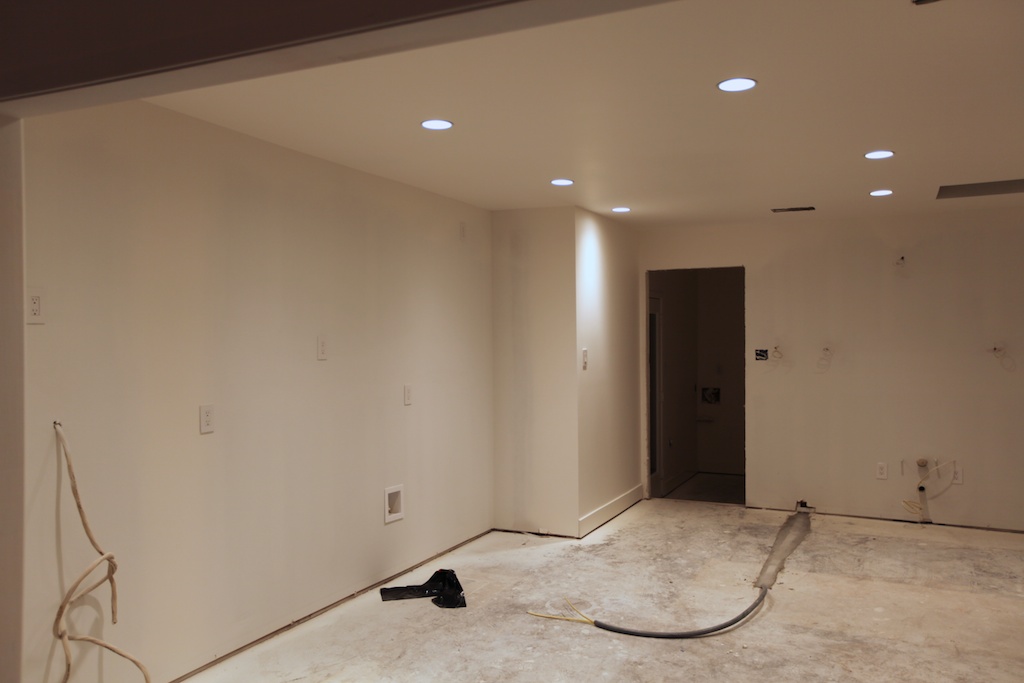 The wire on the left is a 240 volt cable for the Advantium combination convection oven/microwave/warming drawer/toaster/Peking duck oven. I’m kidding about the Peking duck oven, but when I told my dad that we were re-doing the kitchen, he said, “oh, you guys should put in a Peking duck oven.” “Why, Dad?” “I think that would be a really unique selling feature when you sell the house. People would refer to your house as ‘that one with the Peking duck oven.’ ” The Advantium has a setting for everything from “corn dogs (frozen)” to “cobbler (fresh 7×11)” to “hashbrown patties” (yum!) “chicken, bone-in” (that’s what she said!), but I need to petition GE Monogram to add a Peking duck setting.

So the kitchen was looking pretty good with the can lights and the fresh walls, but on Monday, Brian came and installed our cabinets. By himself. 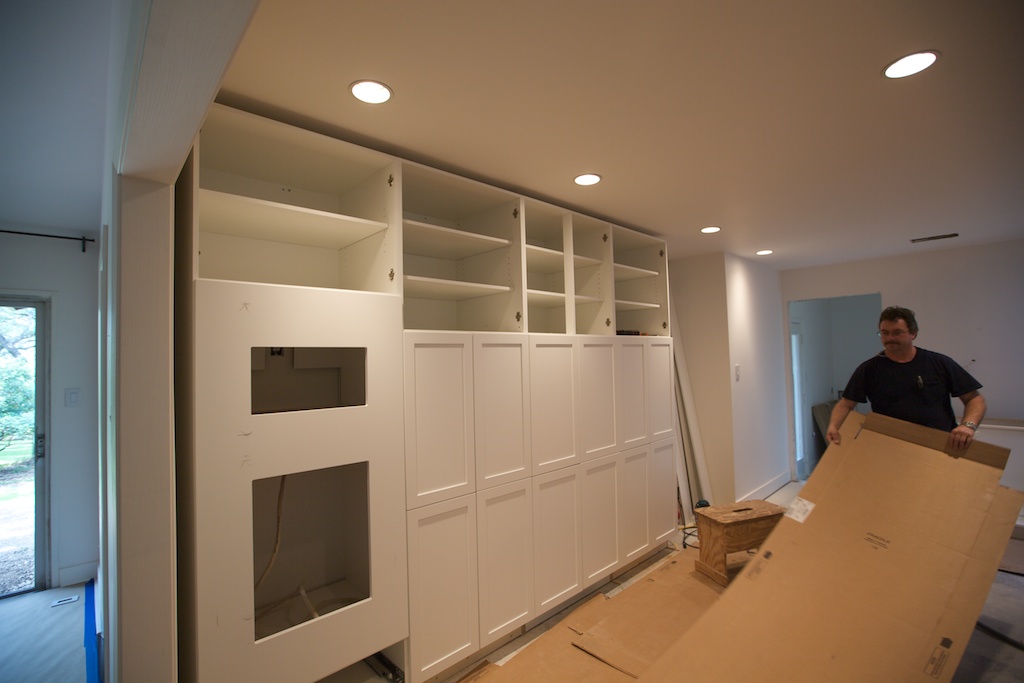 There was still plastic tarp blocking several rooms. We were trying to keep Loki out of the dust, but plastic tarp is like catnip to Loki. 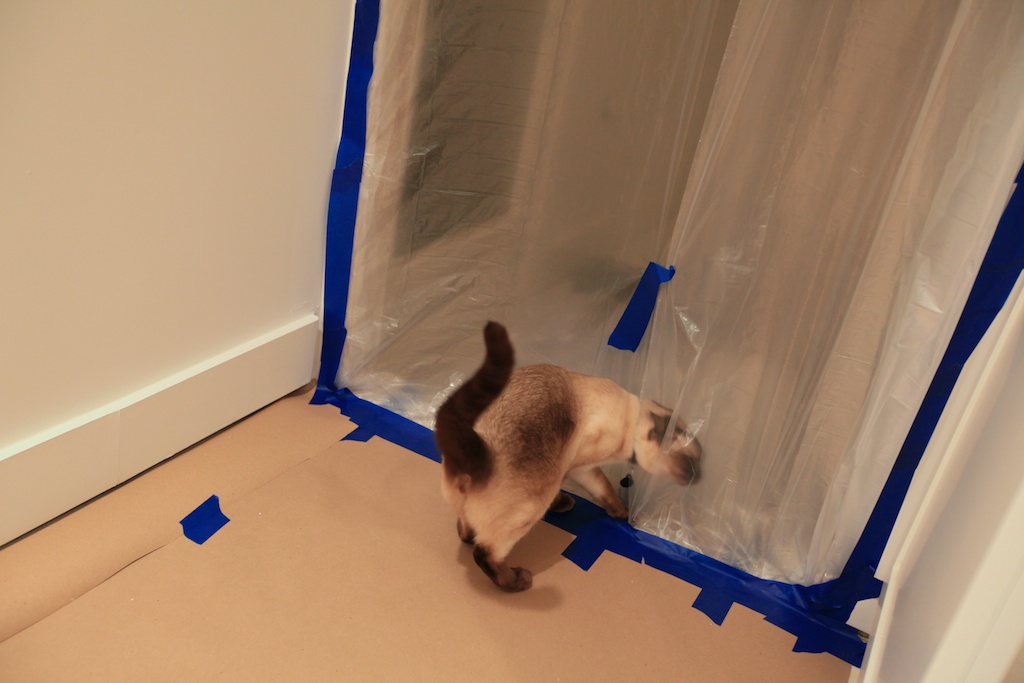 So we decided we’d distract Loki with a new scratcher — covered in actual catnip. 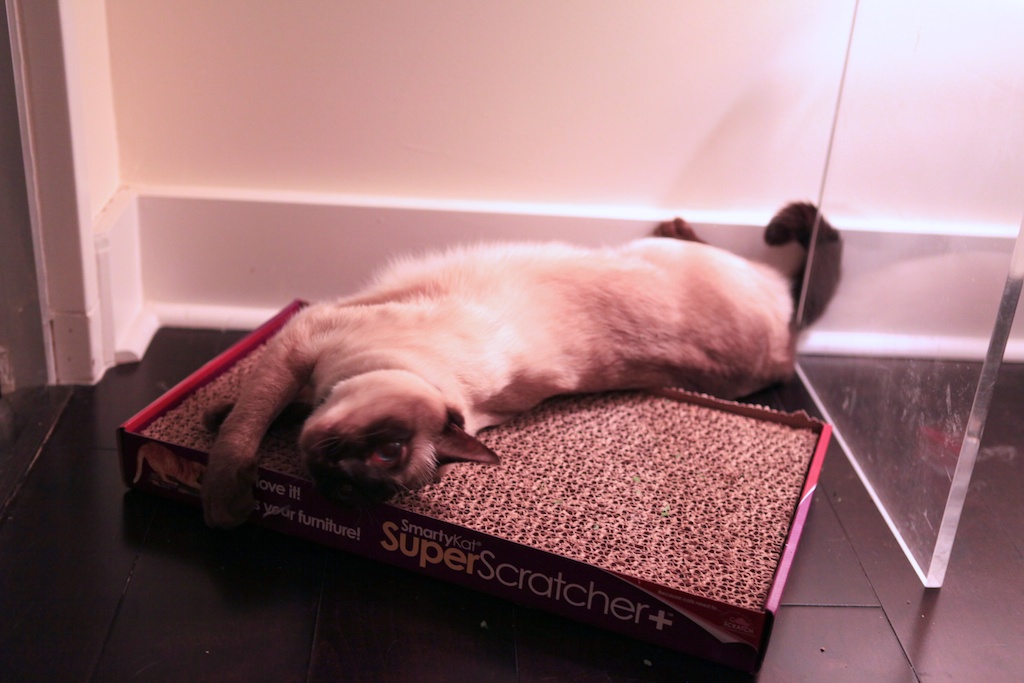 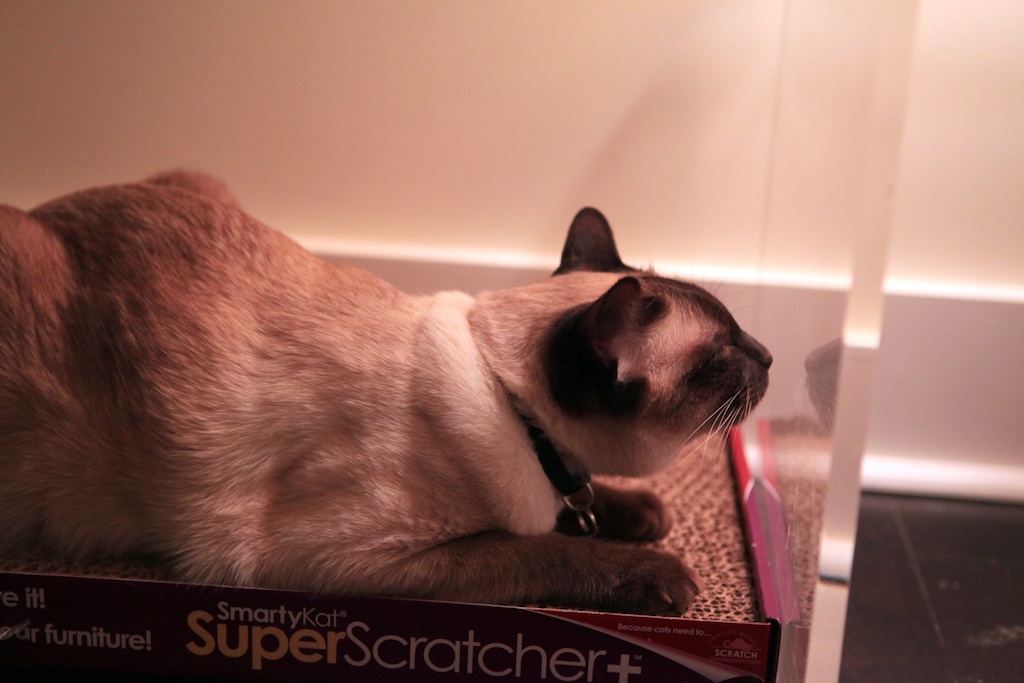 It took Brian two solid days, but the cabinets are in. We went from this, the day before demolition… 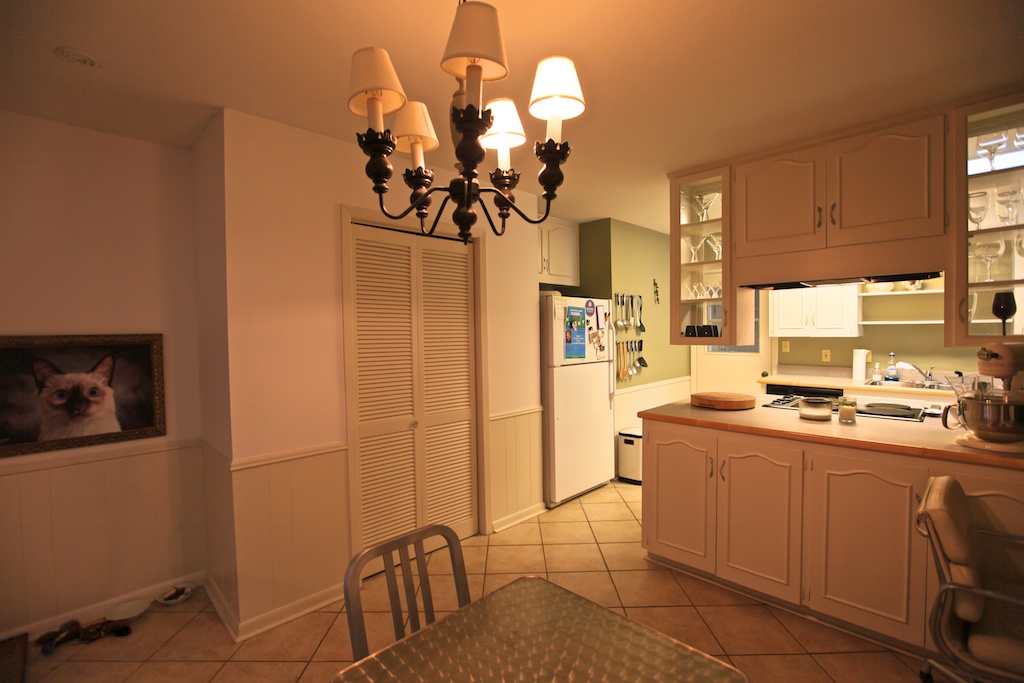 … to this on Wednesday. 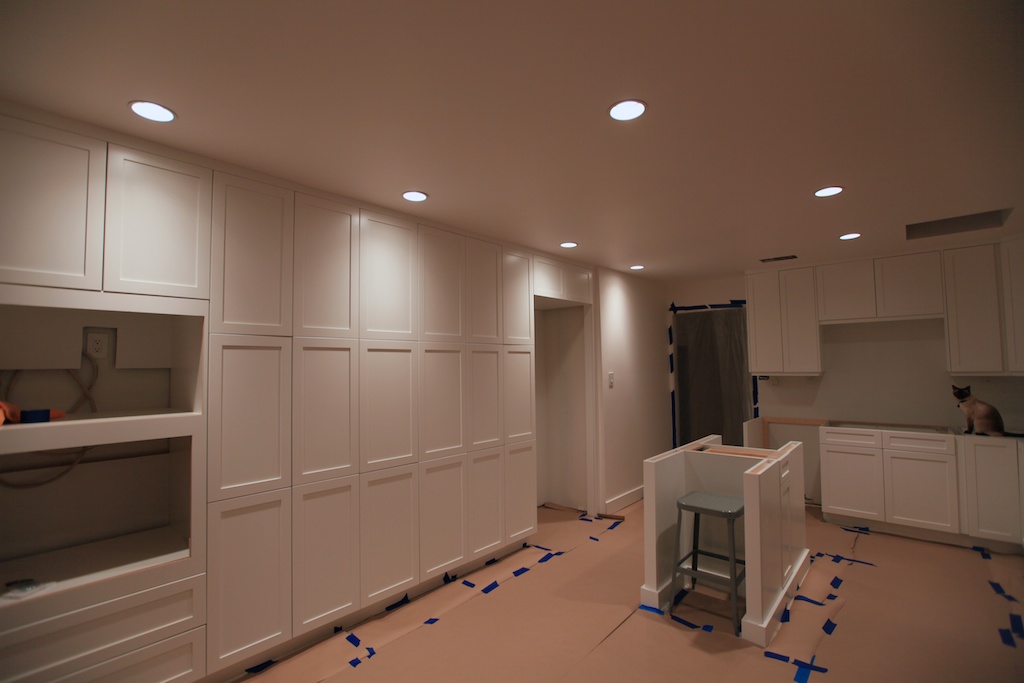 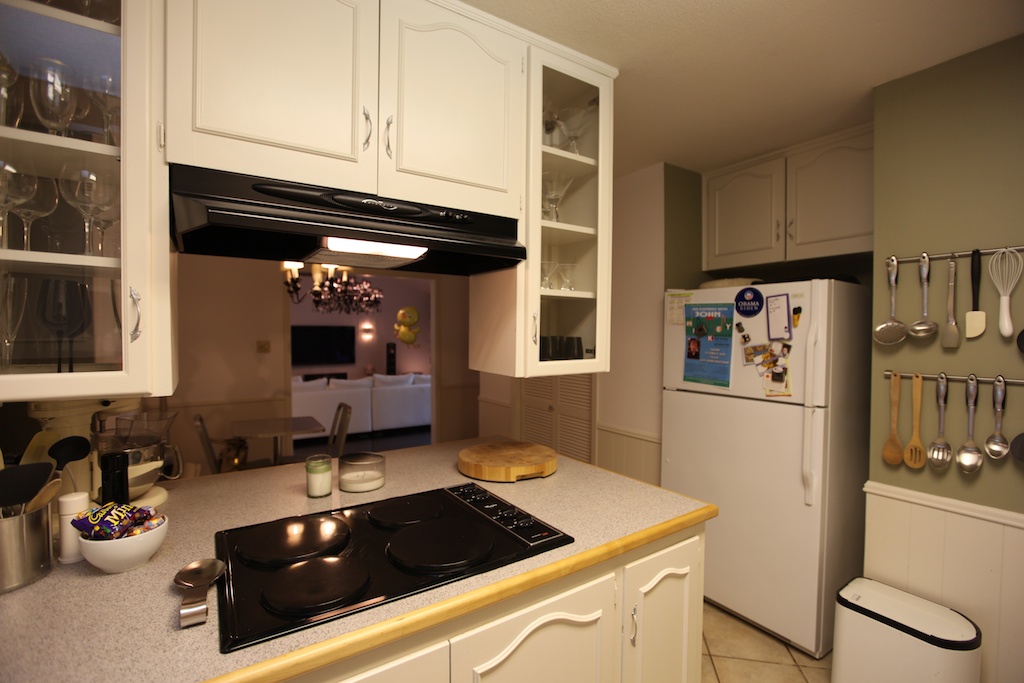 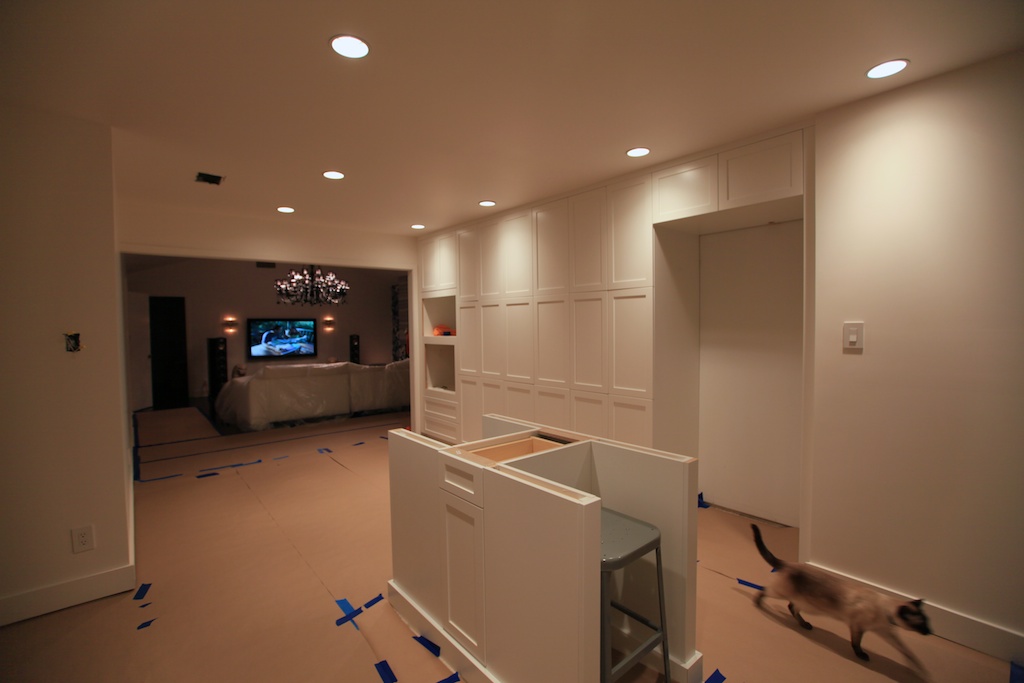 Then yesterday, the electrician came back and messed it all up again. They installed wiring for the over-the-island pendant, the wall sconces, and a few other things — but not enough for me to know where the six hours of labor went. 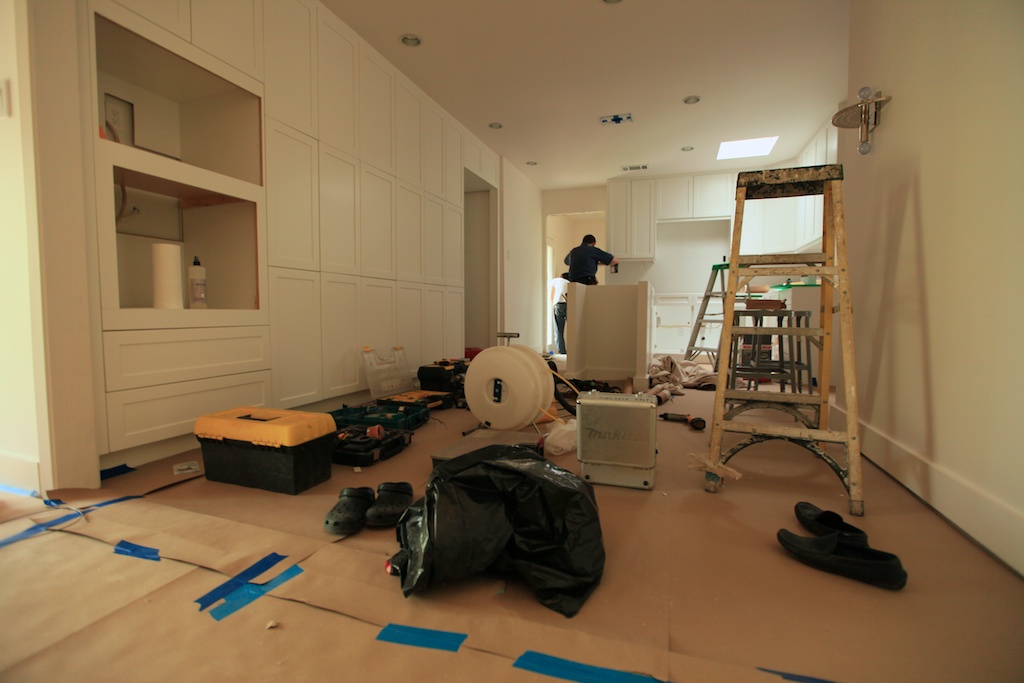 Yesterday, they measured for the new countertops. Today and tomorrow, the wood floors are going in. On Monday, they’ll install the countertops. I have never heard of countertops being ready two days after measurement, but supposedly they will be. (They can’t install them tomorrow because the floors won’t be ready.) On Tuesday, the plumber will come and hook up our new sink. I’m pretty friggin’ excited to have a functional sink again. Also on Tuesday, Brian will come back to adjust the cabinets (so they’ll be perfectly square) and install the hardware (we’re all for clean lines, but we do actually have cabinet pulls).  We’re going out of town on Wednesday, so everything will go on hold for a few days, but the appliance install is scheduled for Tuesday, May 26. I think there’ll be more pictures comin’… 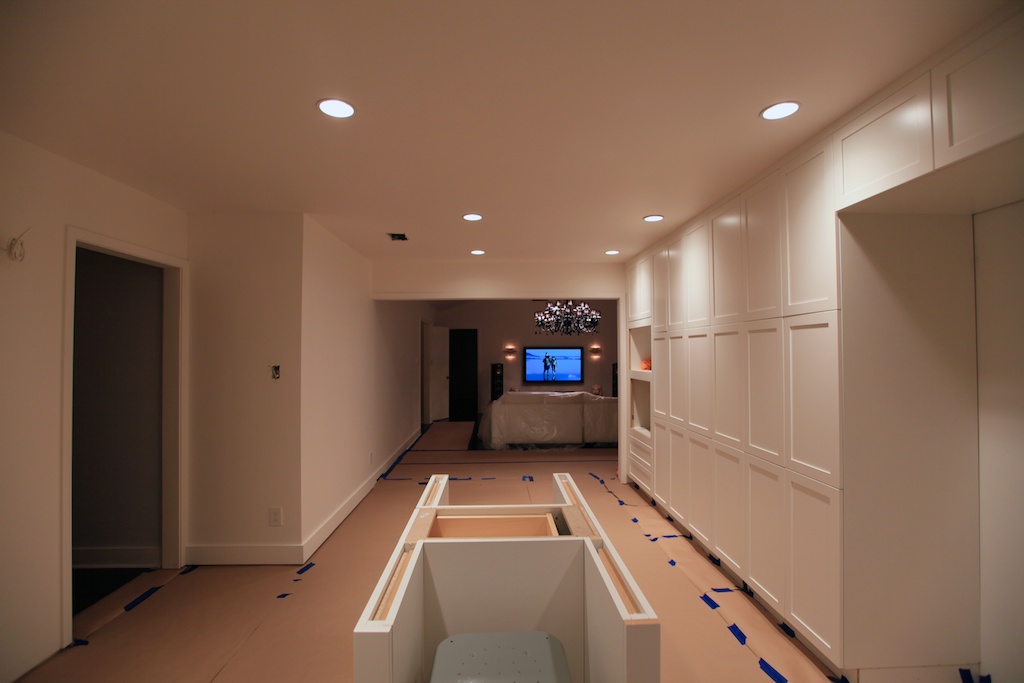 I enjoyed a lot reading this post. I'm almost excited on what happened next. What to know the transformation of your kitchen. And I want to see more pictures of Loki. Love that cat.