Five years ago — five! — I was commissioned to write a piece for the Kappa Kappa Psi / Tau Beta Sigma 2013 National Intercollegiate Band.  Yes, they gave me FIVE YEARS!  And I was still late.  Originally due in January 2013, I finally delivered the piece in May.  Not the end of the world, since this was for an honor band, and they wouldn’t start rehearsing until two days before the concert in July, but still… late.

Every commission has a challenge, and that’s generally what inspires the material.  With this commission, the biggest challenge was the difficulty level.  The players are all current (or very recent) college students, and they’re music majors, and as individuals, they’re excellent players, so I needed to give them some meat.  I didn’t want them to be bored with their parts.  (I never do.  There’s nothing worse – as a listener or a performer – than music that causes boredom.)  At the same time, though, this was an honor band.  They started rehearsing Sunday night, then rehearsed several hours Monday, then Tuesday, and then the concert was Tuesday night.  That’s basically two days of rehearsal for an ensemble that has never played together as a group, with every section consisting of players from all over the country.  It’s basically an All-State band, but with college students instead of high school students – and national, instead of state-based. So the piece needed interesting individual parts, but without quite as many ensemble-specific challenges as I might normally (unintentionally) put into a piece.

On top of this, the concert would be conducted by a conductor with whom I’d never collaborated — Anthony Maiello from George Mason University.  So I was writing a piece for an ensemble that would not even exist until two days before the concert, to be conducted by a tremendously respected conductor, but one I didn’t know well personally. 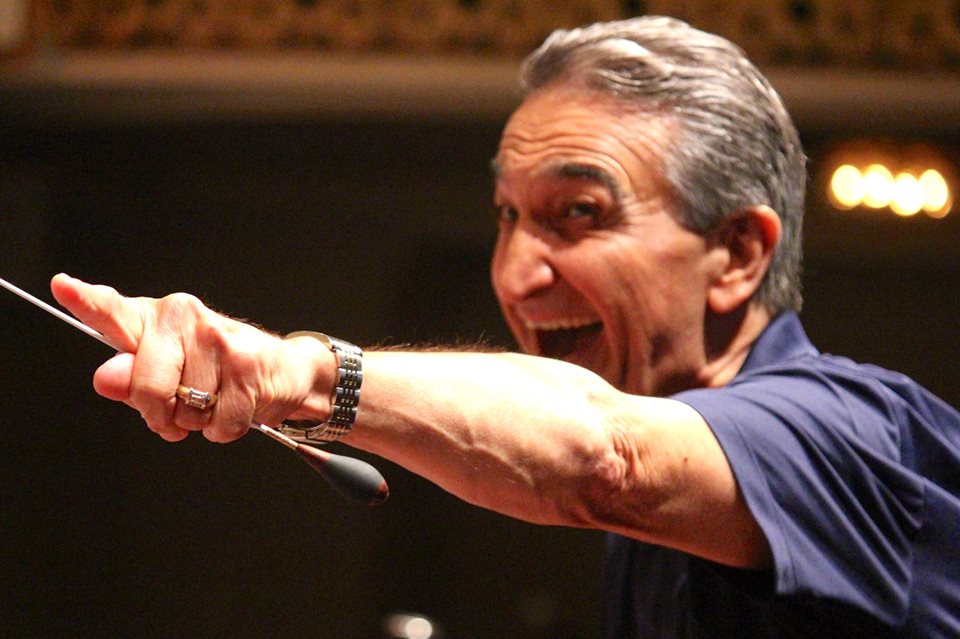 That’s an actual shot from rehearsal.  And that exactly captures Anthony Maiello.  It is impossible not to love him. (All photos, by the way, are courtesy of Travis Cross.)

Tony and I had exchanged several emails about the piece, clearing up questions he had, but we hadn’t spoken in person until a few minutes before the first rehearsal on Sunday night. 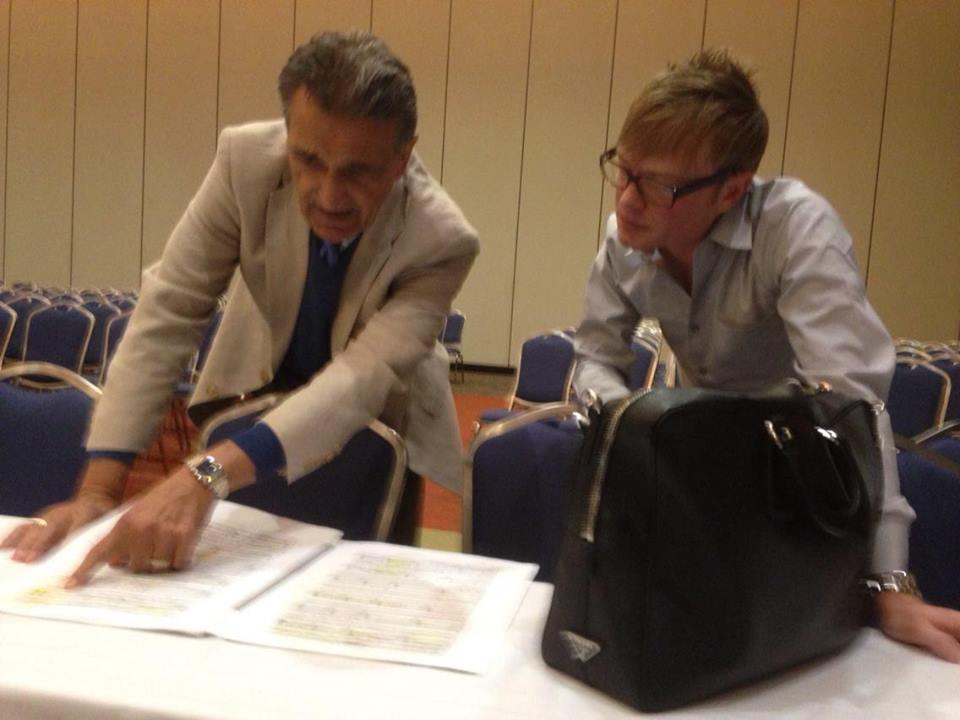 Tony had clearly spent dozens of hours studying the piece. This was going to be just fine. 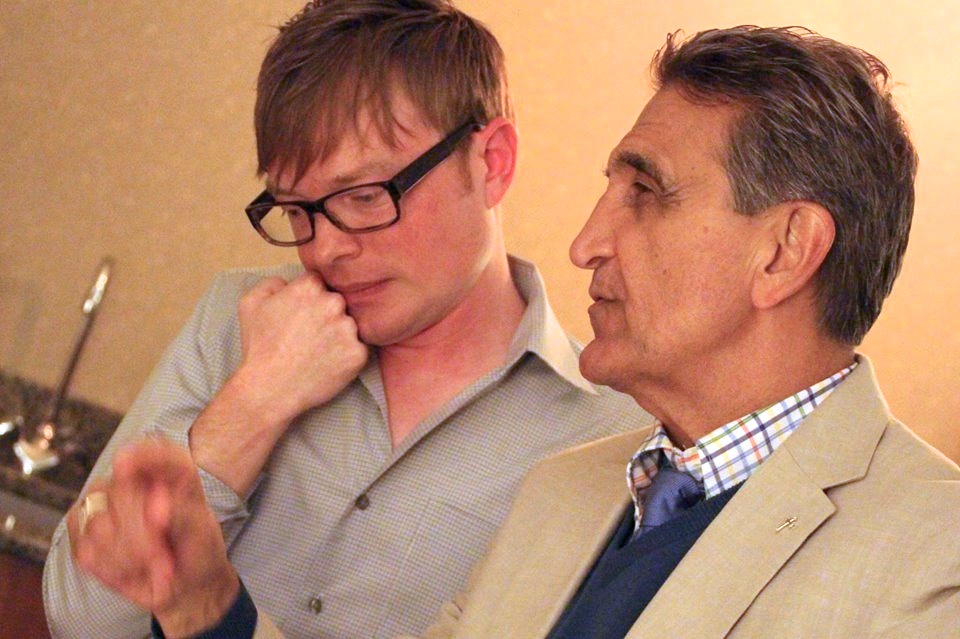 I hadn’t made him a MIDI, although I usually would with a new piece.  This piece has so many solos and so much rubato that the MIDI sounded mechanical and terrible. I thought in this rare case, the MIDI would do more harm than good, provided I was working with a musically sensitive conductor. Boy howdy, I sure was. 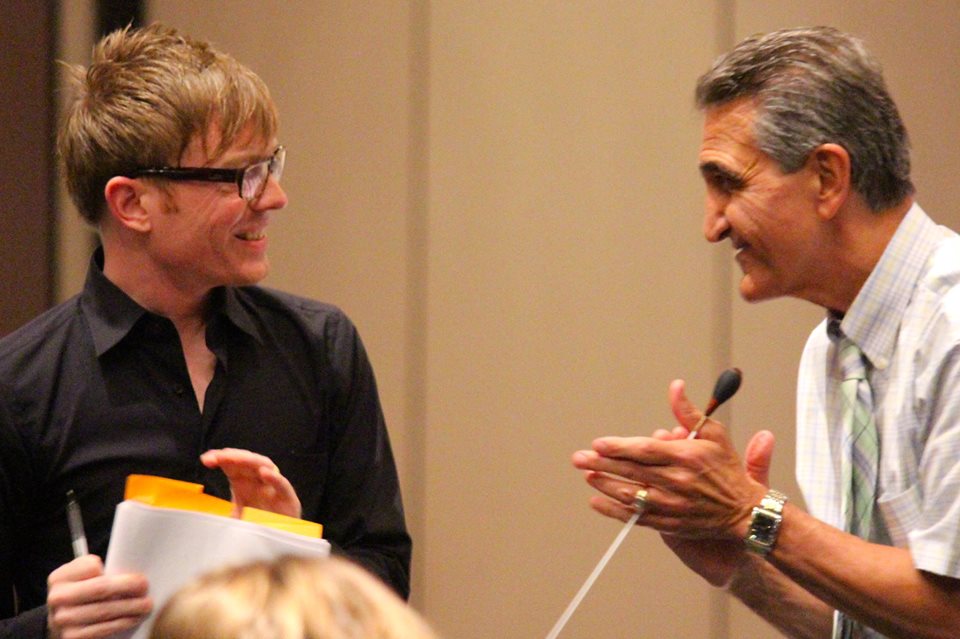 The first reading rehearsal was Sunday night. I skipped it. Composers: Do not EVER go to the first rehearsal of your piece, especially in the case of a world premiere, but even if it’s been played dozens of times — you DO NOT WANT TO HEAR THE FIRST REHEARSAL, and THE PLAYERS DO NOT WANT YOU THERE. You’ll only cause yourself actual pain. Hearing your piece played in any way other than what you imagined is physically painful. It hurts. So do yourself, and the players, a favor, and wait until at least the second rehearsal before attending.

When a classified document must be revealed to the public, it is redacted: Sensitive passages of the text are blacked out, to preserve the secrets within. So revelation just leads to more questions, and what is exposed is only that the truth remains hidden. Writ large, this is the essence of clandestine work—its task is both to keep and to uncover secrets. This dual nature, and its inherent conflict, provides the basis for John Mackey’s (Redacted), a piece that offers hints of covert action and intrigue while holding the full story just out of reach.

I showed up at rehearsal on Monday morning. I loved working with Tony, and also with this group. 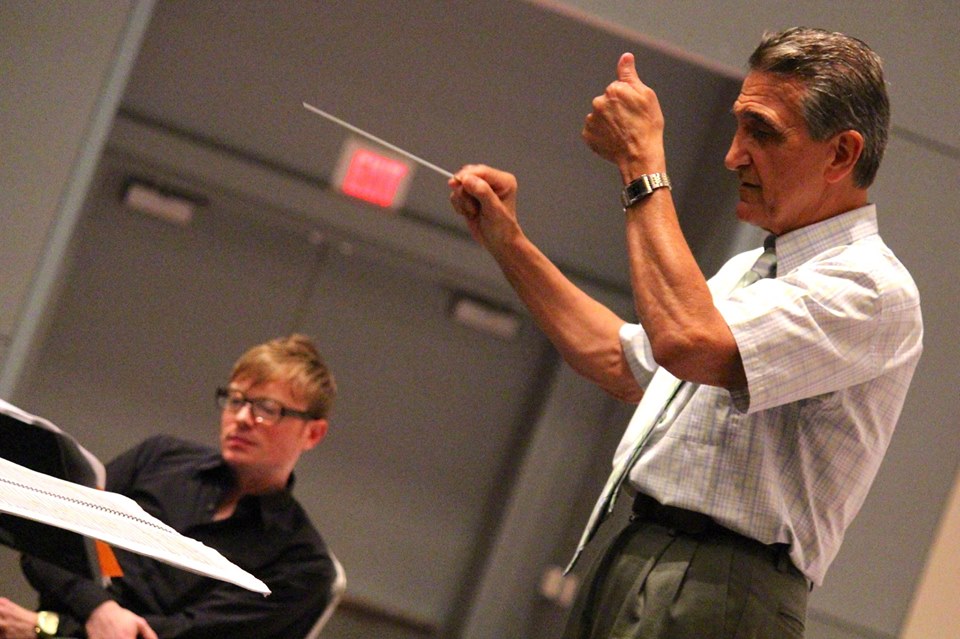 Here, I describe to the ensemble’s bass trombonist, Sean DeLong, what I consider to be “ideal bass trombone tone.” 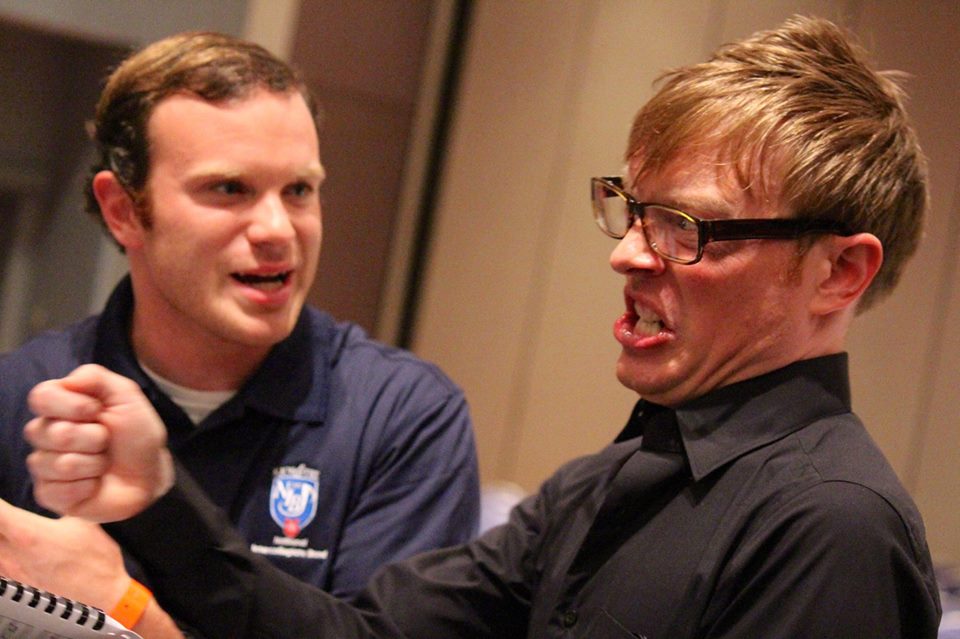 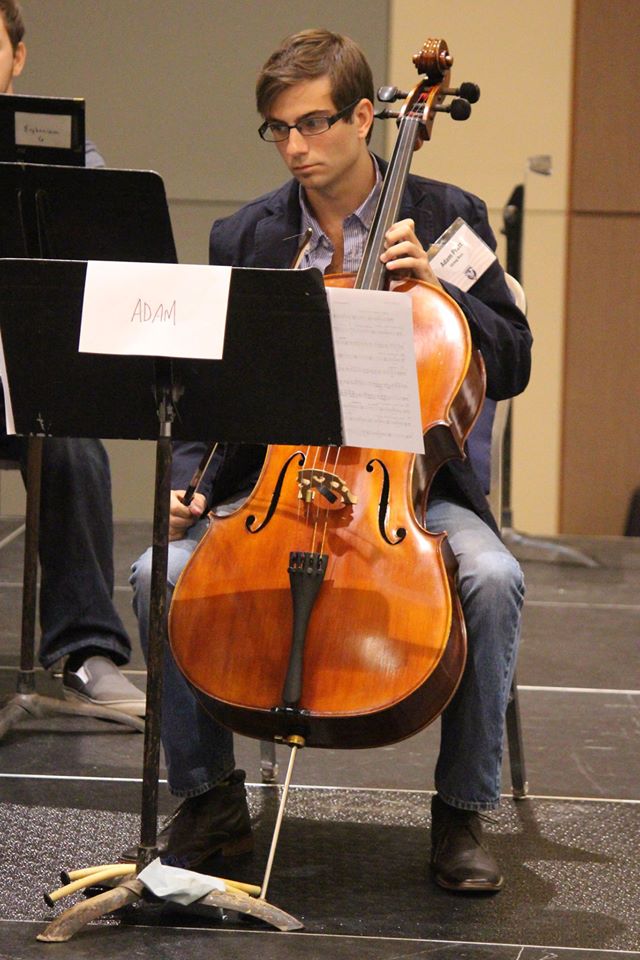 That’s Adam Pratt from Texas Wesleyan University.  One of the pieces on this program called for cello, so there he was, playing euphonium parts on the other pieces, as is tradition with the US Air Force Band. During rehearsal, I looked over at him and thought it might be nice to  take advantage of the fact that THERE’S A DAMN CELLO IN THE BAND. So, I took two measures of what is scored for solo clarinet, and I made it a cello solo. Thank you to Adam for being so accommodating. (The score, by the way, still has that part for clarinets, but I think I’m going to make an official optional cello part just because it was so effective. You’ll see when you listen. You’re going to listen to the piece, right?) 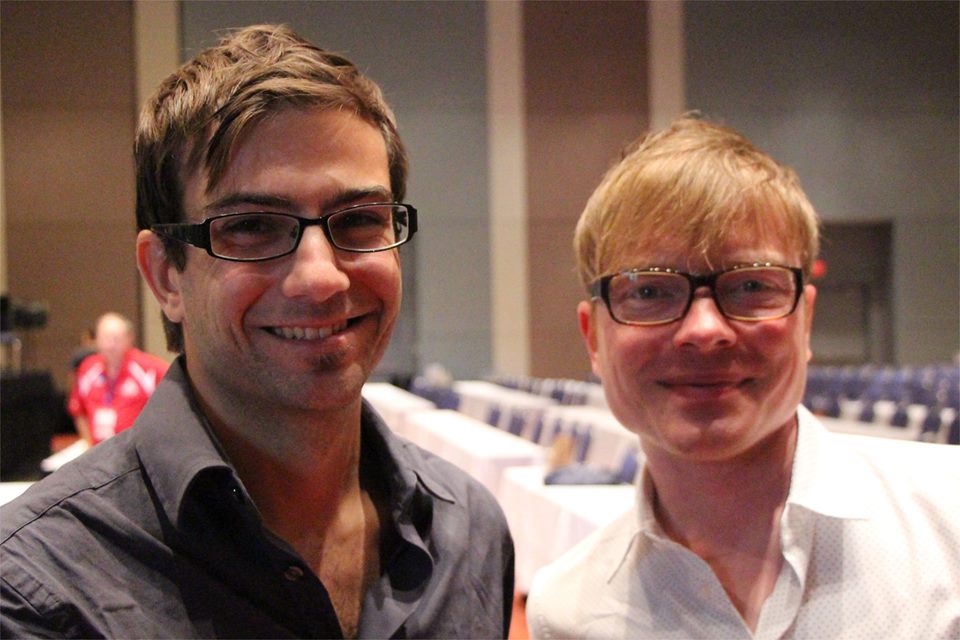 The premiere on Tuesday night was sort of astonishing, particularly when you realize that this piece had never been played before, so none of the players had heard a recording or anything, and they did this in 48 hours. You can view the full score via the page for (Redacted), and you can listen to the world premiere recording either via that page, or by just clicking the Soundcloud link below.

Thank you to Kappa Kappa Psi and Tau Beta Sigma for commissioning the piece, and thank you to Tony and the National Intercollegiate Band for playing the bejesus out of it.

I just instinctively made that face when I heard the bass trombones.
Box 5 all around!

What a fun piece. So sorry I missed the premier.
Thanks for giving our students such a wonderful experience as performers and as audience members.

Excellent piece - I particularly like the cello solo and the moments of more enigmatic harmonies. The orchestration (and key) at rehearsal D reminds me of the beginning of Vaughan Williams's 9th symphony (another enigmatic work); I don't know if that was an influence.

Thank you for posting this! I have been waiting five years to enjoy this piece and you certainly delivered! The students loved it and the audience was amazed! Thanks for working with us!!
Kimbi Sigle, Past National President
Tau Beta Sigma 2007-2009

(Redacted) See What I Did There? says

Thank you for writing this wonderful work for our organizations, and for the band repertoire in general. It is a great addition to the history of the NIB. Thank you!

My daughter Erin was one of the percussionists. Thank you for enabling us parents to download it so we could hear our children perform this remarkable piece! The only suggestion I would humbly submit is: MORE COWBELL!

Thank you so much for your work with Kappa Kappa Psi, Tau Beta Sigma, and the National Intercollegiate Band. It was an amazing experience for all those involved. I will be a "John Mackey Fan Boy" for life! You, Prof. Maiello, and the NIB set the tone for a fantastic week for us.

Thanks Mr. Mackey! This was one of the most wonderful pieces I have ever played. It was so unconventional and atonal and the dynamics kept you on your toes like a movie soundtrack. I see this being in a movie soundtrack or possibly a ritual. This NIB was an experience of a lifetime and felt honored to be in the presence of an awesome composer! Hopefully you will come out with a solo clarinet and wind ensemble in the near future!!!