Here’s Jake Wallace’s program note for my other new piece, “High Wire” (that link will take you to the page with the score and demo recording), which will receive its premiere next month by the University of Wisconsin-Milwaukee Youth Wind Ensembles.

The high wire is a visceral, acrobatic stunt: A tightrope is suspended at enormous height, often swaying above some deadly hazard, and one of the Flying Wallendas dares to traverse it, dazzling the captivated onlookers with death-defying courage and precision.  Any errant step brings a gasp of panic from the audience, who dread what they may see yet cannot look away.  John Mackey’s High Wire captures that electric sensation, presented without a net above a three-ring heavy-metal circus.

This explosive fanfare courses with dizzying virtuosity – pure kinetic energy released from a compression-loaded spring. The commission — put together by the University of Wisconsin-Milwaukee Youth Wind Ensembles in honor of their founder, Thomas L. Dvorak — was simply for a concert opener but, as Mackey relates, other factors contributed to the eventual composition:

“I was itching to write something fun and flashy and yes — I suppose — virtuosic for the ensemble. I had been writing slow, simple music just before starting High Wire, and my brain felt like a hyperactive dog that’s been locked up indoors for days. I needed to sprint around the yard, musically speaking.

“From the outset, I was just thinking ‘flashy fanfare.’ To me a fanfare is a grand, brass-flourish-loaded opening gesture for a concert, but they’re usually very short. How could I create one that was four minutes long, keeping it exciting while not making it aurally exhausting? I was going for ‘razzmatazz’ and I wanted lots of polychords, plus a largely octatonic scale, but it seems that if I combine those ideas — fanfare plus polychords plus octatonic — we get… circus.”

The octatonic scale Mackey references is a synthetic collection of pitches favored by a host of composers since the beginning twentieth century, including, notably, Igor Stravinsky. This scale works particularly well in High Wire for two reasons. First, it provides a host of semitones, which give any sonority a biting dissonance; and, second, it allows the generation of polychords (two chords that sound like they’re in different keys played at the same time) and quick backflipping between a major and minor “home” key. All of these factors interlaced provide one indisputable characteristic: sonic edge. When applied with bright, pealing orchestration, it presents the listener with a sense of agitation and fright that something might go wrong. That fright comes in waves, as the energies surge, then dissipate, only to reload methodically for another discharge.

Mackey, who makes allusions in his earlier Aurora Awakes to Gustav Holst’s First Suite, slips in a few references to the work here as well. The concluding measures, for instance, mimic the contour of Holst’s thematic motives and orchestration, while a chaconne-like ground bass emerges midway through the work like a troupe of elephants gallivanting about the arena, metamorphosing through its own influence into a demented chorale. This chorale eventually takes over with the force of a rock power modulation and absorbs all of the surrounding virtuosity, pressing down upon the ground before lunging forth one last time and giving the audience a final gasp as the sonic world comes crashing down to the ground around them.

—
And just so this post isn’t only words, here’s a picture I took the other night of arctic char crudo from Rialto. 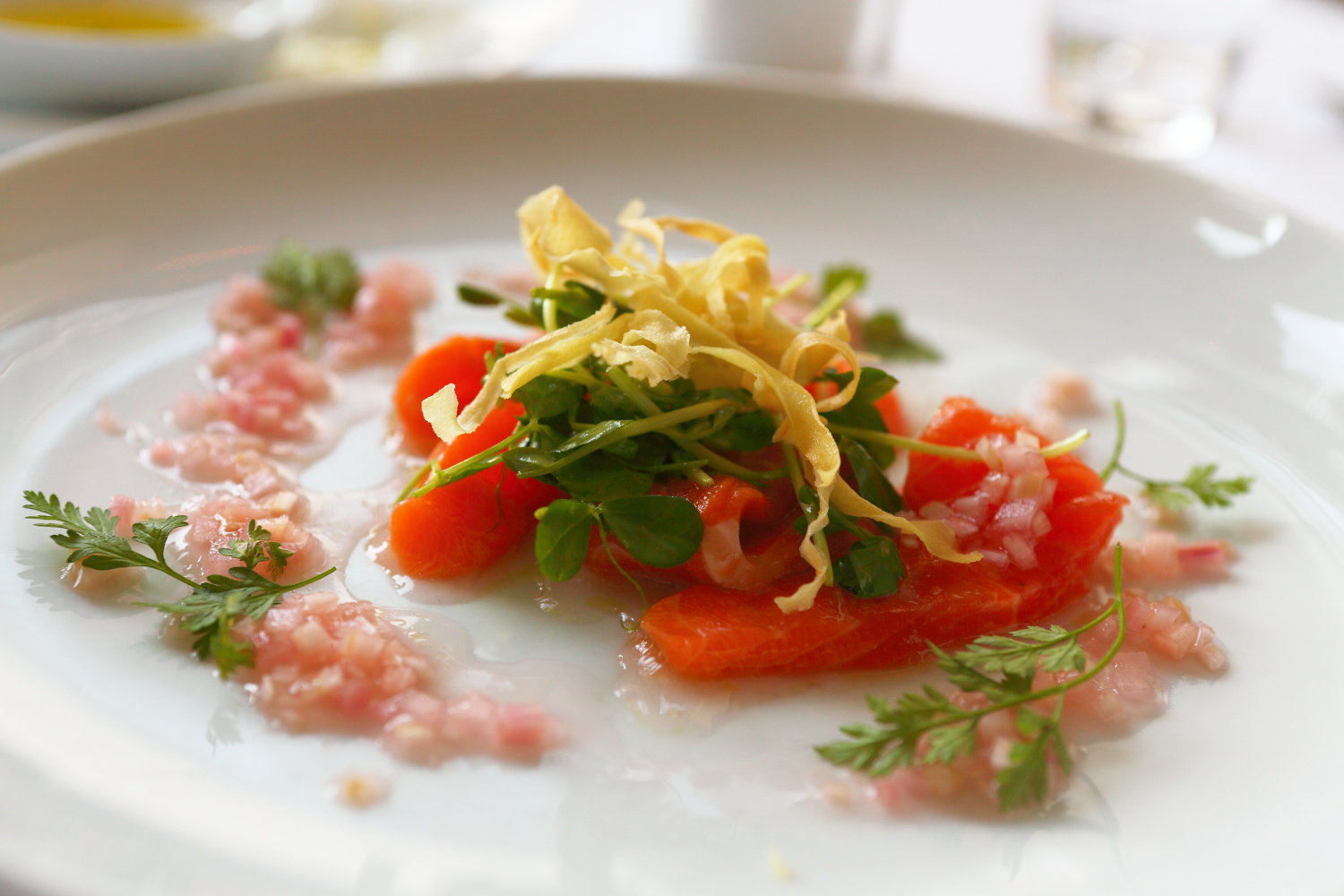