AEJ and I spent the day in Dallas yesterday. Well, we spent half of the day in the car (it’s a three-and-a-half hour drive each way), and some of the day in Dallas. We drove up to hear Jennifer Higdon‘s Violin Concerto, which won the Pulitzer Prize this year. (The program also included the Mozart Gran Partita, a 45-minute snoozer after the Higdon. But I digress…)

Jennifer’s concerto alone was worth the trip, and the performance by Hilary Hahn and the DSO seemed flawless to my barely-passed-ear-training ears. The first movement of the concerto was my favorite, with great shape and pacing and brilliant colors. It starts with solo violin harmonics, which then move to the violin section players. There are cool George Crumb-inspired colors in the percussion, like crotale on the timpani — a sound which I’ll be stealing soon (how had I forgotten about this sound?!) — and crotales struck with knitting needles. There are great back-and-forths between the soloist and the violin section — a sort of call-and-response of glissandos, with the section’s responses sounding almost mocking. (AEJ likened the mocking to what Loki does with us.  “Loki, NO!”  And then Loki replies in his typically derisive tone, “naaaaaoooo.”)  The cadenza is a tour-de-force with finger-straining double-stops in insanely difficult intervals like 7ths, every one perfectly executed by Hahn. The movement ends with a return to the harmonics. This movement deserved the Pulitzer on its own, and there were two more great movements to follow. I’ve read a few articles that compare Higdon’s concerto to the Barber concerto, but I don’t really hear it, except maybe in the last movement, which is short and fast like the Barber, but the similarities sort of end there. Oh, and the fact that this one is sure to become a staple in the repertoire — all the more impressive when you consider that there’s no shortage of violin concerti.

We got to talk to Jennifer and her partner Cheryl for a while after the concert, and Jennifer asked me, in what would be the surreal moment of the evening, “so, did you sell your iPad?”  It seems she’s a reader of the blog.  When we were leaving the hall, we told them about the great dinner we’d had before the concert, and she asked, “will there be pictures in the blog?”  Why yes, yes there will…

On Friday, I’d emailed human Zagat guide, Jerry Junkin, asking him for a pre-performance Dallas restaurant recommendation.  He had several good suggestions, but the one that sounded best was a restaurant called Stephan Pyles, a restaurant with a ceviche bar (I love ceviche) and appetizers like a banana empanada with cardamom-scented spit-roasted suckling pig.  It sounded fun and unlike anything we have in Austin.  (We have great TexMex and steak, but the food here is a lot more conservative than the politics. There aren’t too many areas where “conservative” is our preference.  Well, maybe in regards to cheese. I’m not big on stinky, challenging cheese. But anyway.)  I tried to get a reservation at Stephan Pyles, hoping for a 5pm reservation, but the best they could do was 7:30.  On Monday.

Turns out that the same chef has another place called Samar by Stephen Pyles, just a block from the concert hall.  I called to make a reservation, and learned that unless we had a party of six or more, they only took walk-ins.  I explained that we needed to be at the hall by 7pm for the pre-concert talk, and that I hoped to be seated for dinner around 5:00.  “The bar opens at 4:00.  You could come then, get on the list for a table, and have a drink at our bar.”  Okay, twist my arm.

At 4pm, they unlocked the doors, and we took a seat at the nice onyx bar. 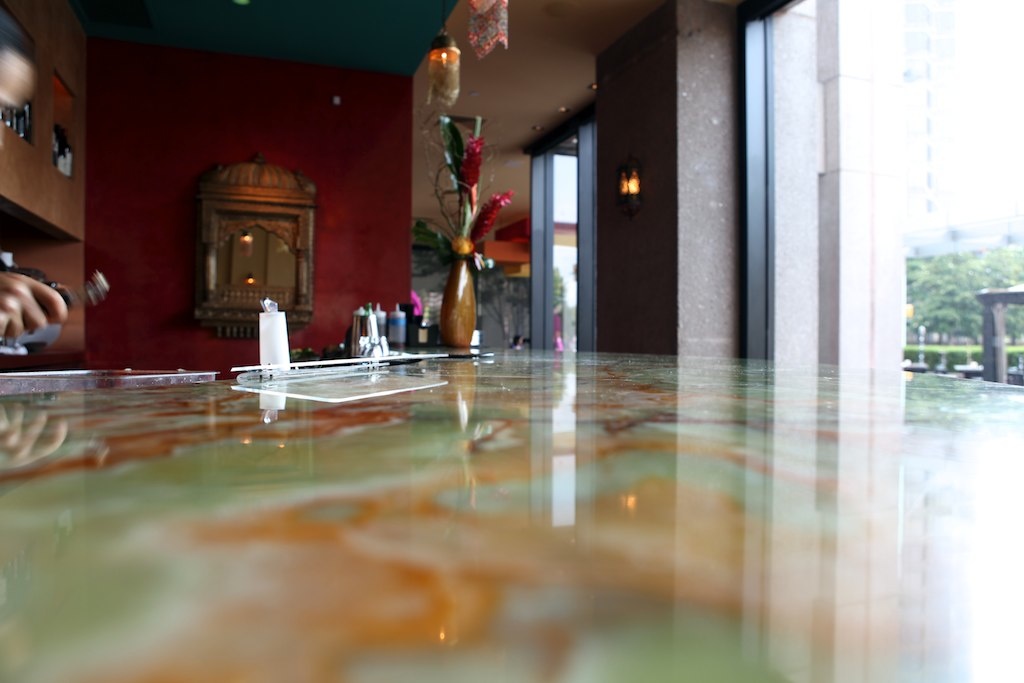 We had an hour to kill, so we may as well have that cocktail… 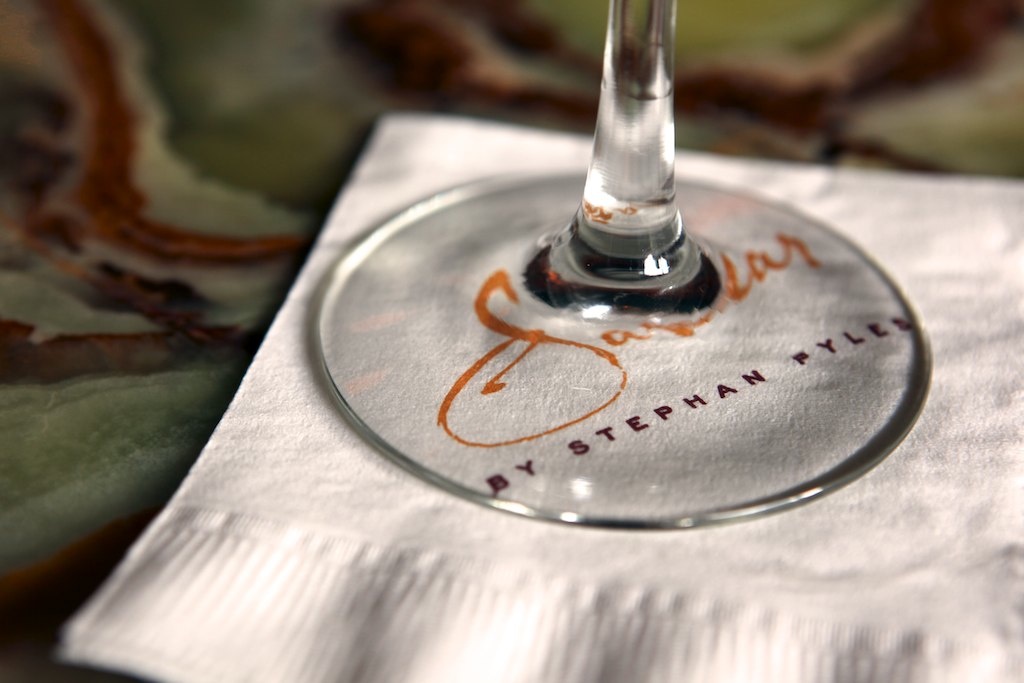 AEJ ordered the Samartini, consisting of Grey Goose, fresh citrus sour, and pomegranate. There’s also a little layer of sugar at the bottom. It was delicious, and because of the different layers, the flavor changed as you worked your way down. 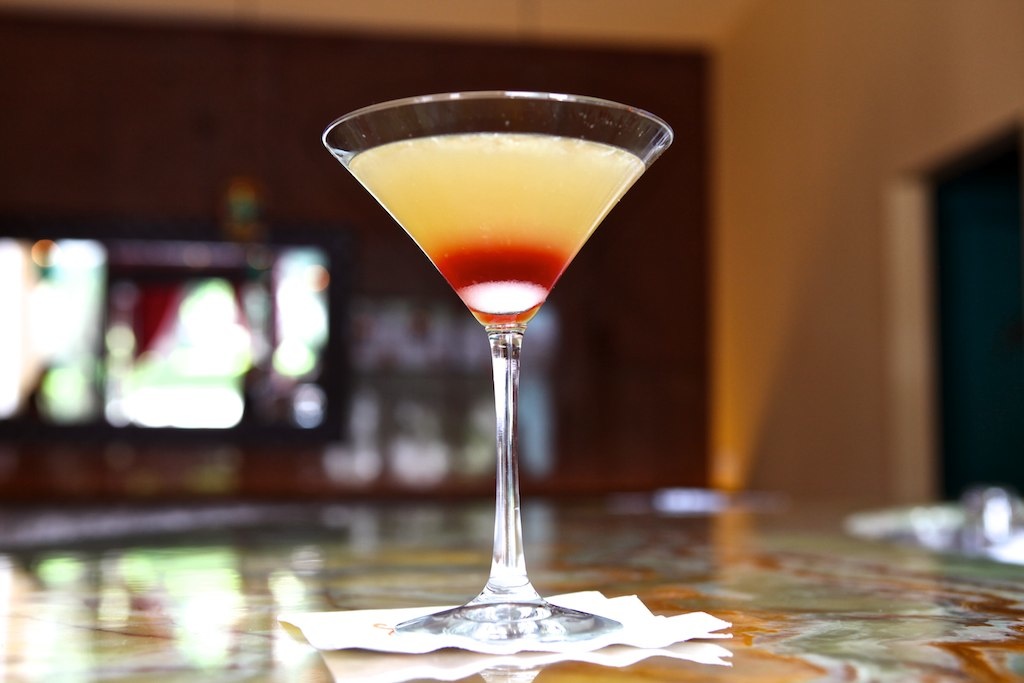 I ordered the same thing, but our bartender — Alex, who was just about the best bartender I’ve ever met — suggested I try something different, just to keep it interesting. I ordered the house margarita, which turned out to be — and this is no exaggeration — the best margarita I’ve ever had. It’s made with muddled lime (I watched him muddle the fresh lime by hand in the shaker), fresh citrus sour (lemon and orange, fresh-squeezed), a gold tequila, and something I’d never heard of called liqueur 43. He rimmed the glass with fresh citrus and salt. Wow. 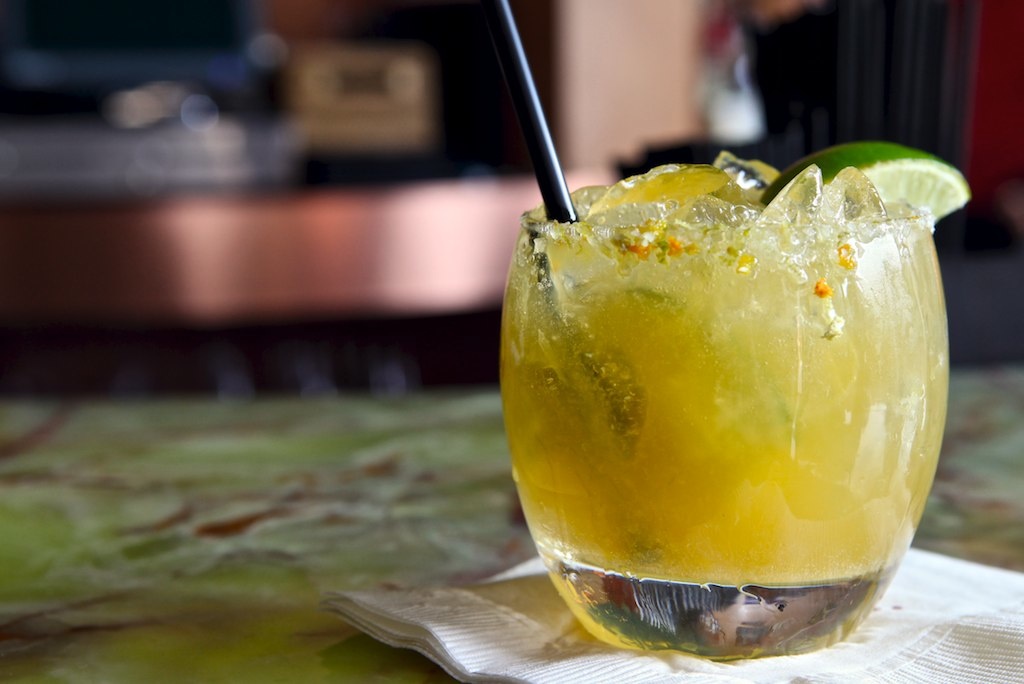 Wow, those were good. Is it time for dinner? No? It’s only 4:25? Then I guess we should order another cocktail…

AEJ went with the “Sensualite,” made with muddled lime, mint, Sky pineapple vodka, and cava (a Spanish sparkling wine). It smelled like spring. 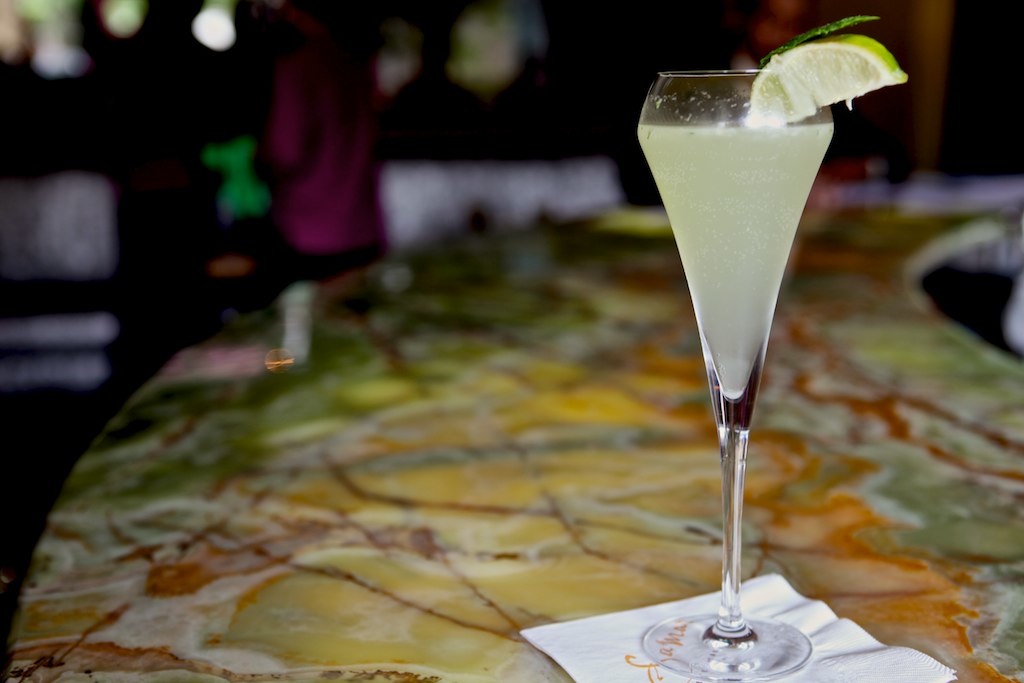 I chose the “Chaitini” — iced spiced chai tea, spiced ru, and Disaronno (a kind of amaretto), with a few tea leaves sprinkled on top as a garnish. It was tasty, but (not surprisingly) a little heavy. It was sort of like a chocotini, but with chai instead of chocolate. 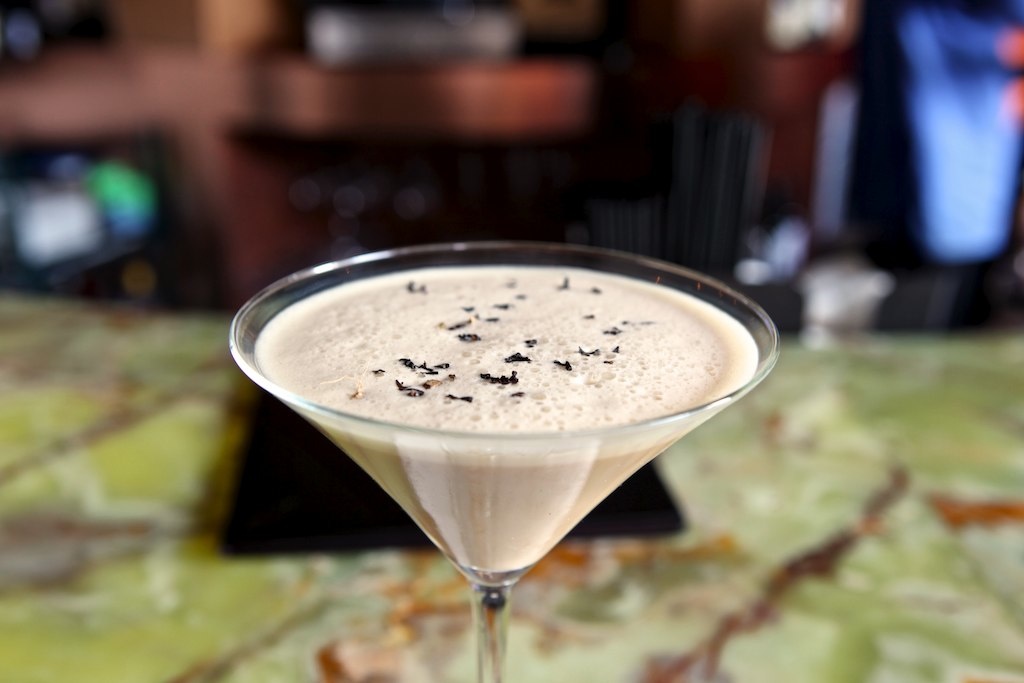 Ooo! Snacks! Spiced nuts! And we’re talkin’ crazy-good spiced nuts, that seemed to be spiced with some sort of curry. 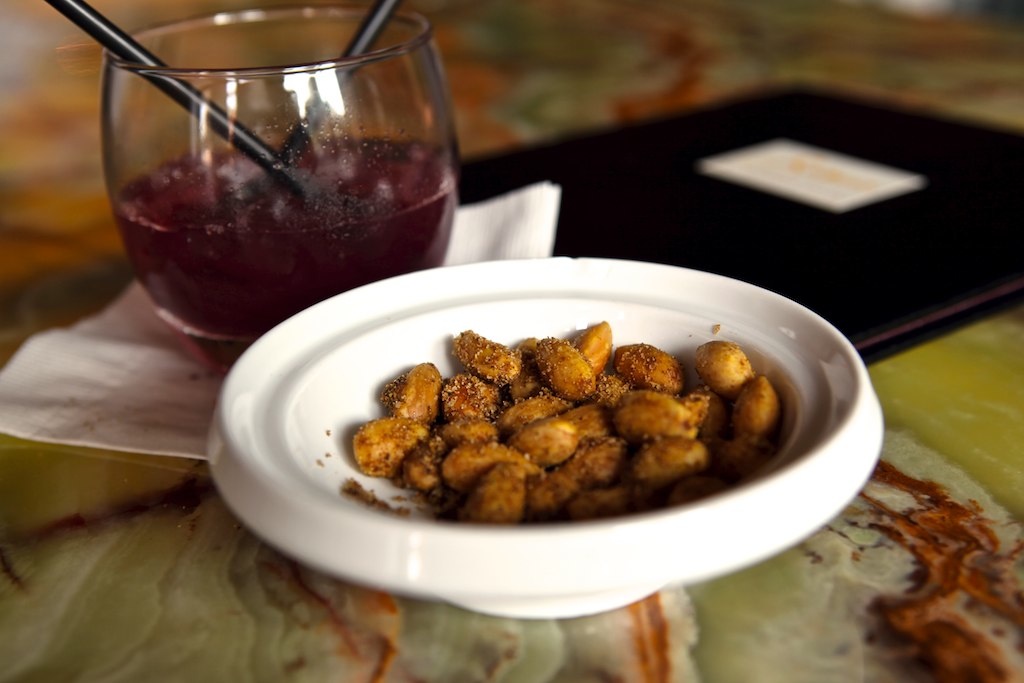 Hey, what was that drink in the last picture? That’s their homemade red sangria. We’d been watching them prepare it — red wine, brandy, blackberries, cherries, and cranberries — and I asked Alex how it was. He gave us a “sample” — which was more of a free, full glass. We loved this guy. 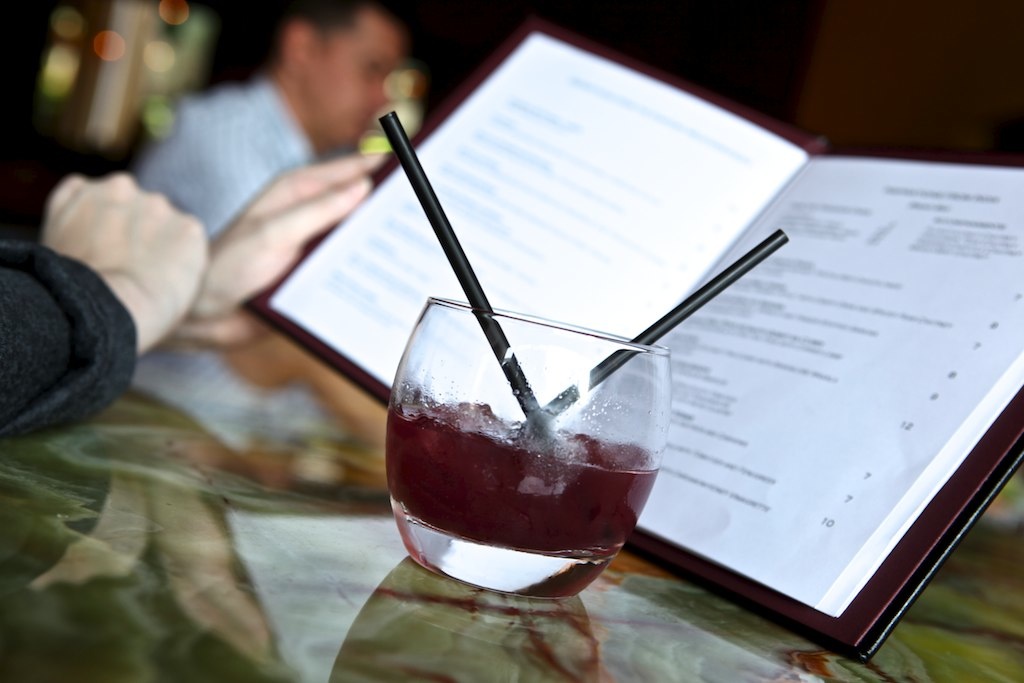 By this time, it was 5pm, and our table was ready. We were having such a good time at the bar with Alex, though, that we decided to just stay and eat there. The menu at Samar is divided into three regions: Spain, India, and Eastern Mediterranean, and it’s all tapas (very small tasting-size servings). I love food like this. I tend to get bored pretty quickly with a dish, and the more variety I can have during a meal, the happier I am. Alex suggested starting with the Spanish menu, since those items were the lightest. He hadn’t steered us wrong yet, so we ordered “queso y aceitunas marinado en hoja santa” — Idiazabal cheese with olives marinated with garlic and hoja santa (and herb)… 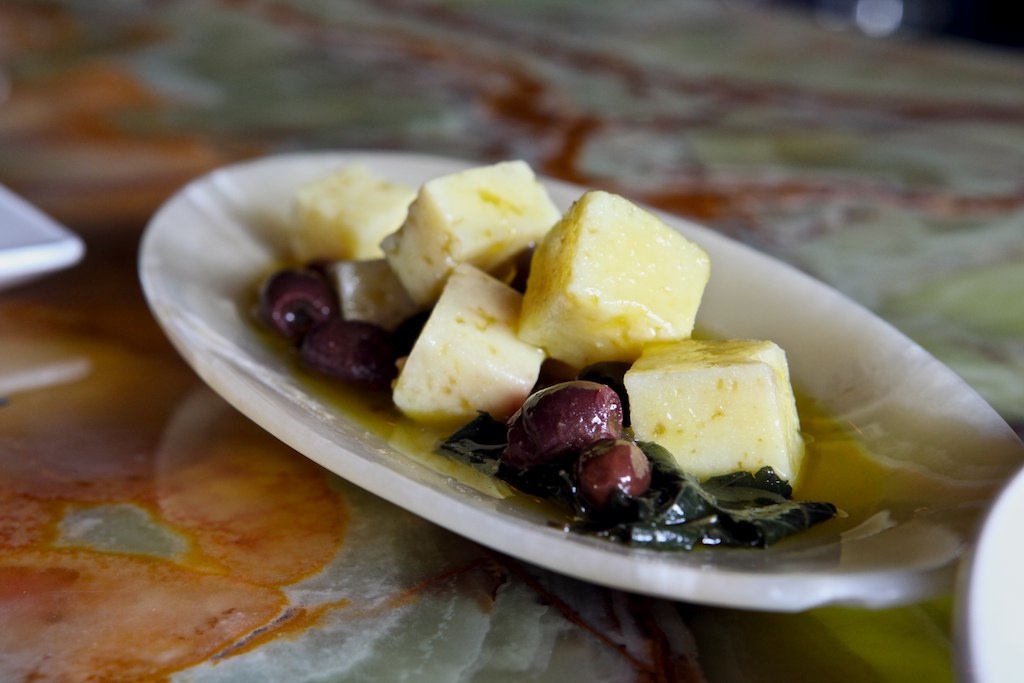 … and “pimientos de padrone” — “blistered” green spanish chiles with hickory smoked sea salt. These were delicious — mild, but with the occasional very-spicy pepper tossed in as a surprise. The charred bits with the salt crystals were the best bites, and made for a great contrast when you alternated between this and the creamy cheese of the other dish. 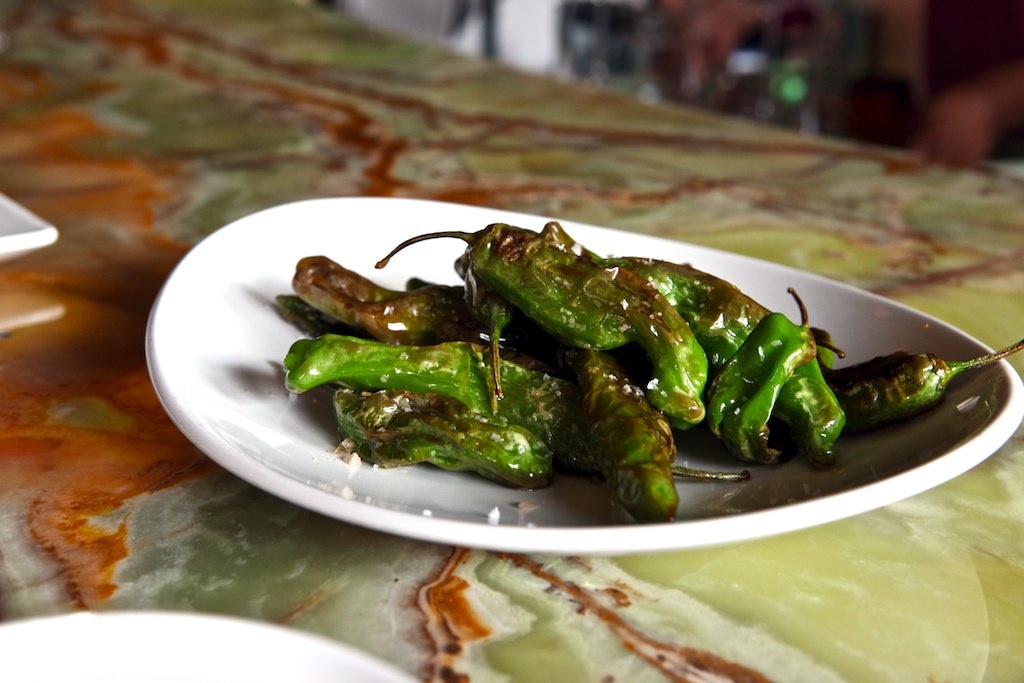 Without even asking, Alex poured us another free drink sample — his new experiment, a white sangria. This one was citrus-based (whereas the red sangria was red berries), and it was light and bright and went well with the food. We ordered two full glasses after tasting his (very generous) sample. 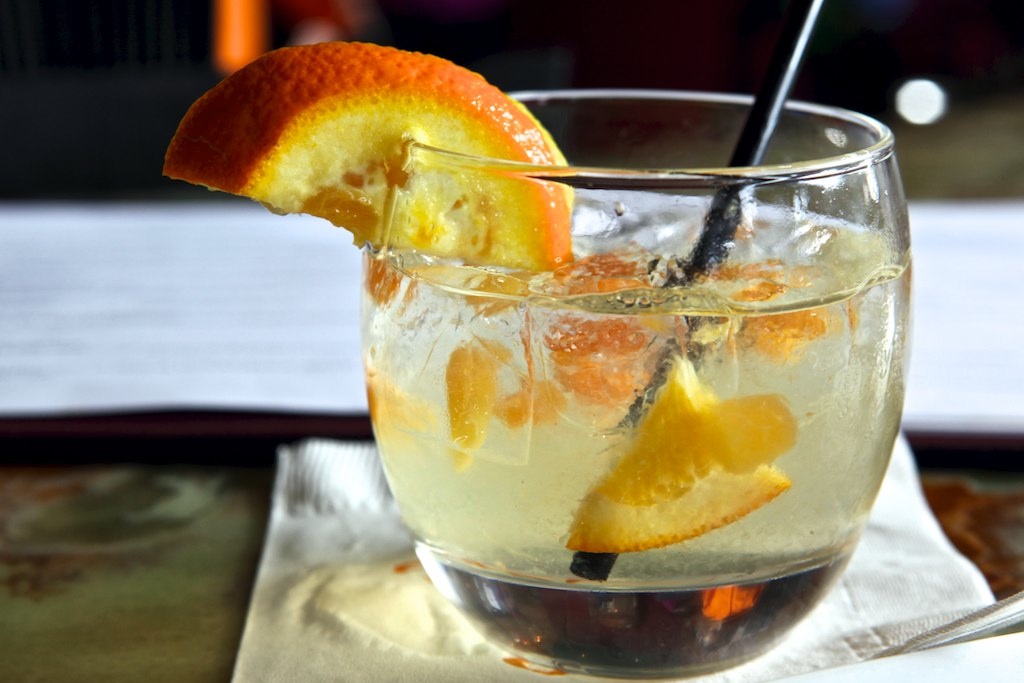 Our next dishes were from the Eastern Mediterranean menu. I’ll admit that Mediterranean food is one of my least favorite, but we did avoid the lamb dishes, opting for the fun “kibbeh maa tzatziki” (crispy bulgur wheat croquettes with golden beet tzatziki). Who doesn’t love a deep-fried dumpling? 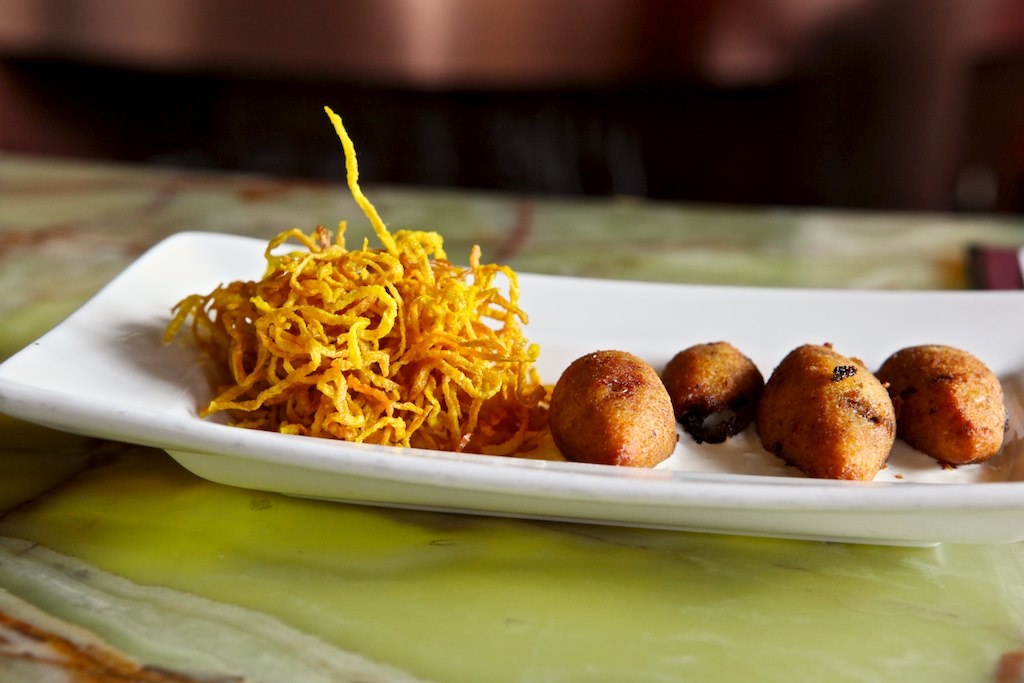 We paired this with something from the Indian menu — something that we always enjoy, but found to be exceptional here: samosas. This is their “tandoori subji ka samosa,” a samosa stuffed with tandoori vegetables, spinach, and paneer, with a garbanzo chaat, and a tamarind-chipotle chutney on the side. DAMN. I could eat these every meal. 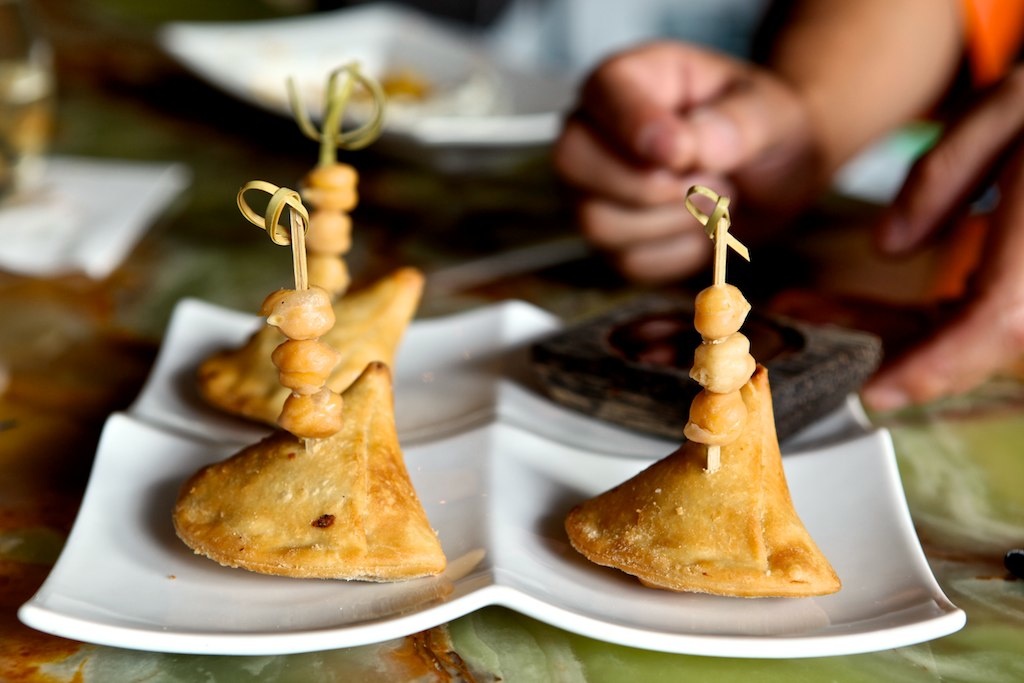 Next was the one thing that didn’t quite work: “tandoori gomi ka phool” — a saffron and cumin infused tri-colored cauliflower with “kerala poryal” (no idea). Whereas you could eat most of the dishes with your hands (always fun), you really needed to cut these with a knife and fork, but they were very hard to cut, as the stems were pretty tough. 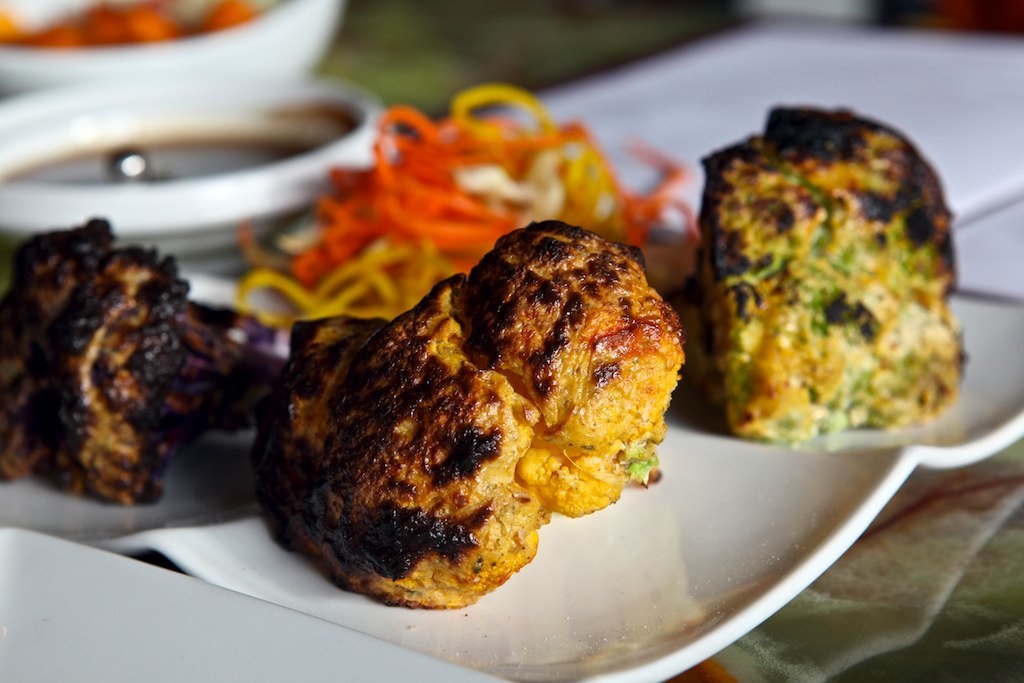 Besides the difficulty of actually eating these, the other issue was… the flavor of two of them. I didn’t know there were even three colors of cauliflower, but there are, and they have very different flavors. Turns out I like “normal” cauliflower, but the other two colors — not so much. I mean, purple cauliflower looks very cool, but the taste was a little challenging and sulfurous. 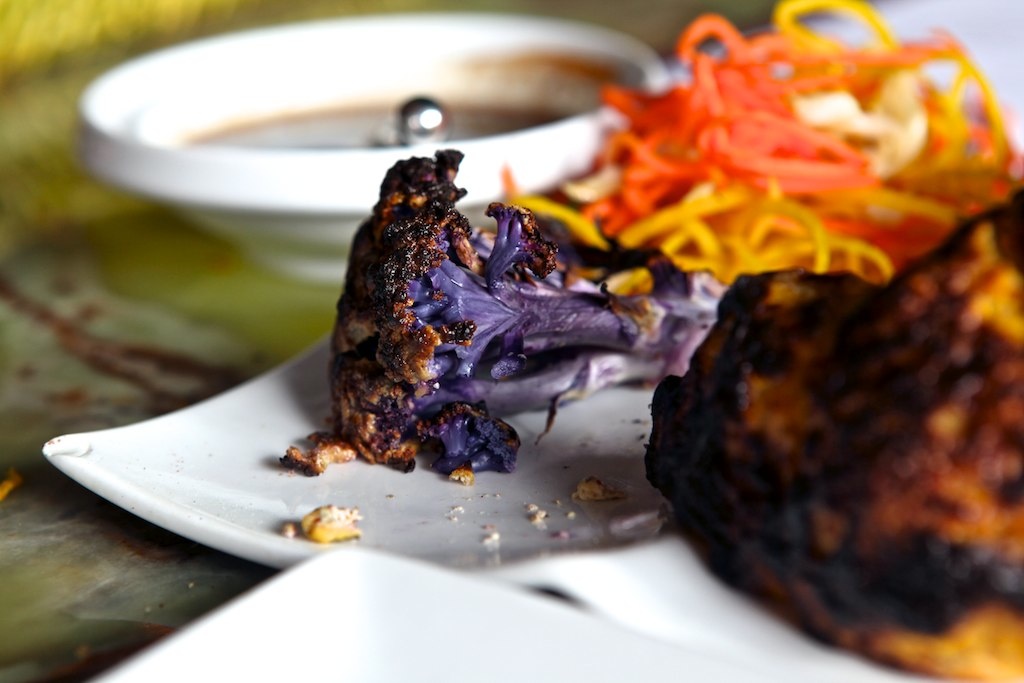 Now it was all Indian — one of our favorites. Alex highly recommended the “murgh makhani” — tandoori chicken butter masala with tomatoes and fenugreek (an herb that, according to the Internets, may help increase your milk production. Yeah, that’s what it said.). We ordered this with some naan and a dish of the tamarind-chipotle chutney. This was all kind of extraordinary — certainly the best Indian(ish) food we’ve had in Texas. If you like tikka masala, you’d love this. 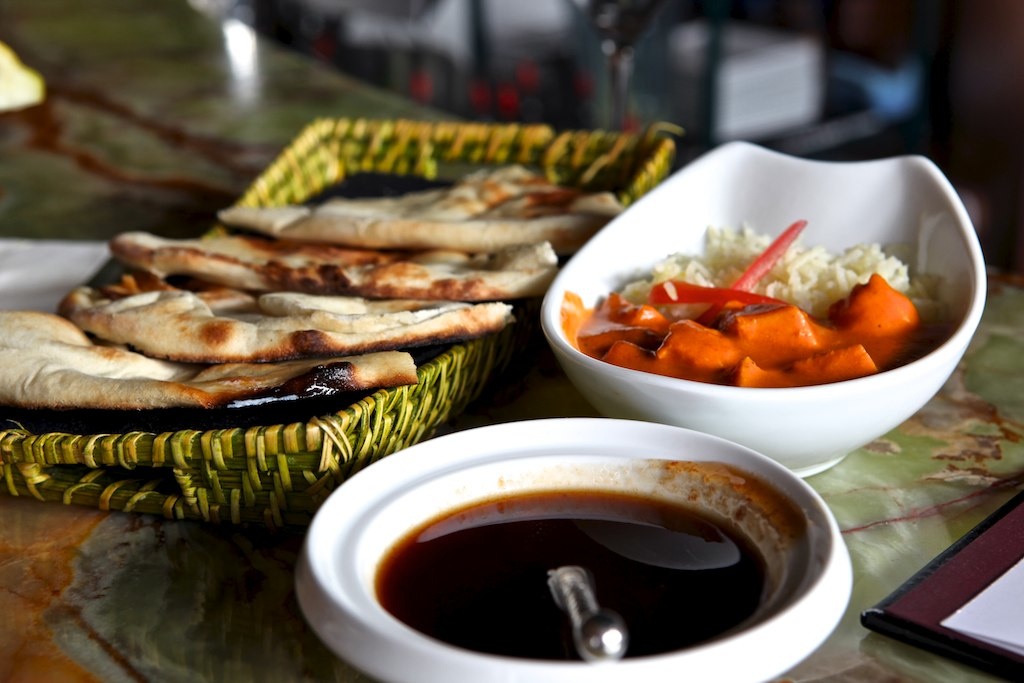 Alex starting mixing a crazy-looking drink in front of us. AEJ asked him what it was, but he wouldn’t say — and then he gave it to her as (yet another) free treat that he’d improvised on the spot. It had midori, and it was, again, yummy. Where her earlier cocktail tasted like spring, this tasted like Hawaii. (We’ve never been, but this must be what Hawaii tastes like — except maybe less fishy.) 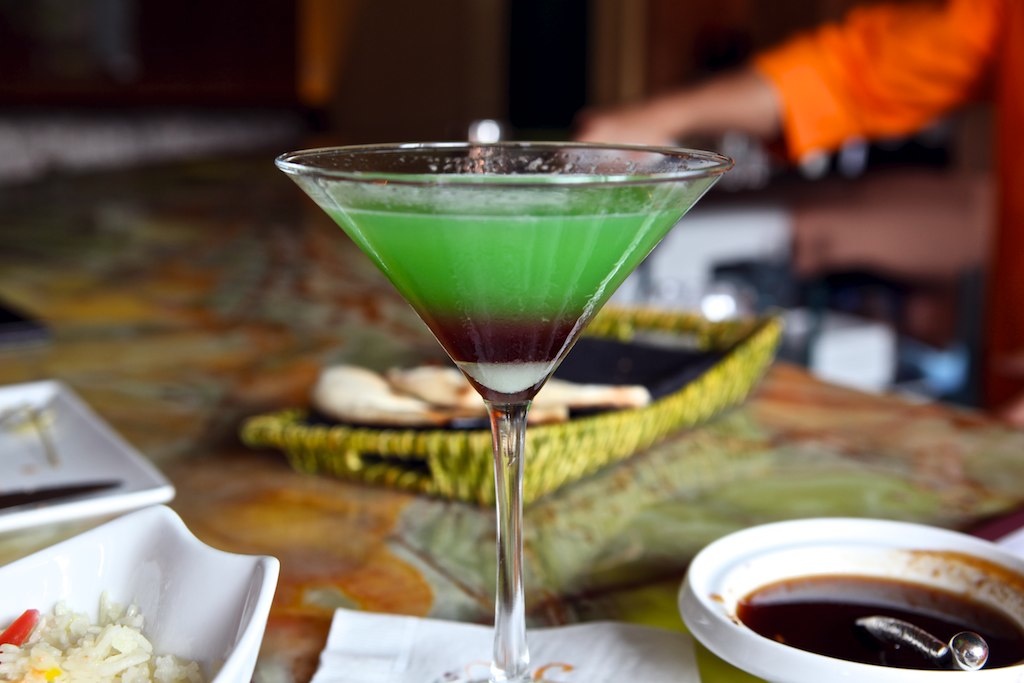 What? It’s time for dessert? Oh, I couldn’t. I couldn’t pick one, that is, so we ordered three.

I might have resisted this one based on the description — candied ginger stuffed semolina croquetas with natilla — but this may have been the yummiest thing the whole night. It was like a hot, gooey, ginger donut. 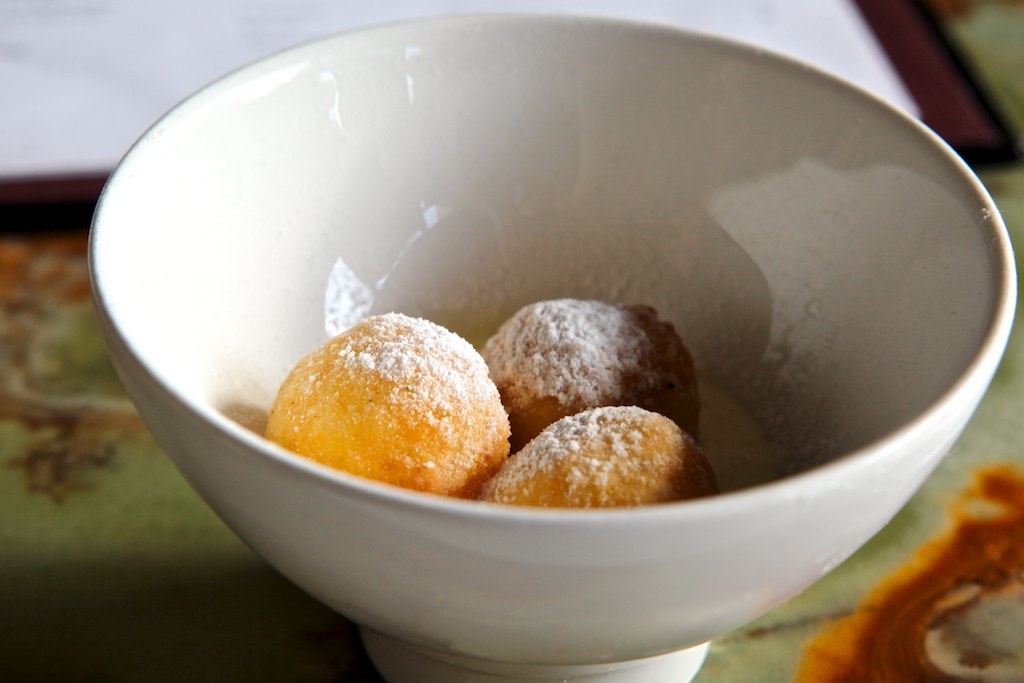 This is the caramelized apple empanada with cinnamon ice cream. Guess what! It was great. 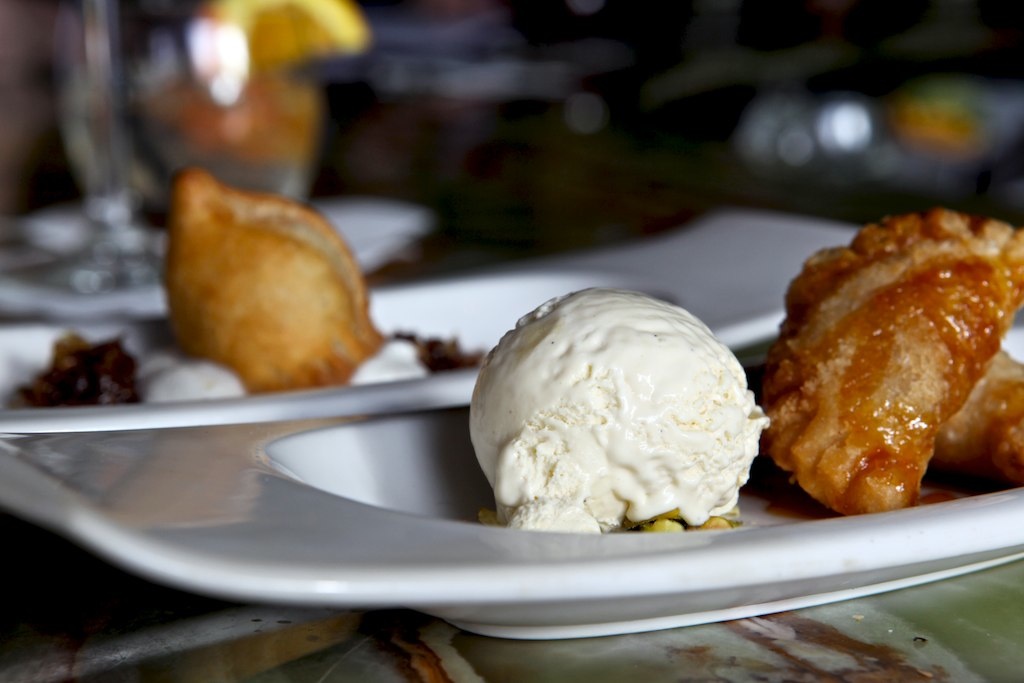 We were there two-and-a-half hours, during which we had no fewer than nine cocktails, no fewer than three presented as gifts from our bartender. (If you want a 30% tip, this — plus exceptional service all around — is the way to accomplish that.) Samar is, hands down, now our favorite place in Dallas. It was so good that AEJ is considering riding up to Dallas again with me next week when I drive up for a clinic at Martin High School — just so we can eat there again. If you find yourself in Dallas, particularly in the arts district, you owe it to yourself to visit Samar — and I recommend sitting at the bar, particularly if Alex is working. 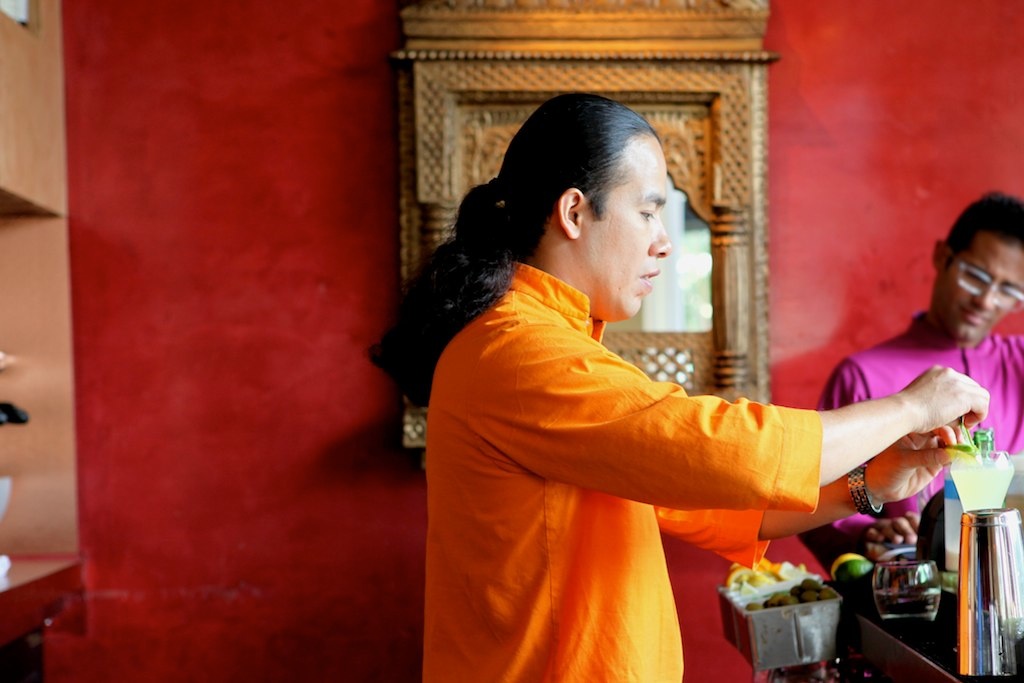 It was a great day in Dallas. One more thing about Jennifer Higdon… Is there a nicer composer out there? I don’t think I’ve met one.  She is, as another blog described her, “graciousness personified.”  She’s kind of making the rest of us look like nasty jerks.

I was really hoping that the "nasty jerks" link would bring the reader to my facebook page or something.

mmmm... I want to eat your blog.. NOM NOM NOM. Hope you are well John!

how the hell do you drive back home after 9 drinks? not to mention even find your way to the hall & stay awake through a concert?????

Samar is one of my Dallas favorites. I have never taken a seat at the front bar, usually opting for the back bar at the open kitchen. Instead of cocktail experiments I have had a few food experiments. Golden!

Samar is moments away from the Arts District by foot (or cab if you had 9 cocktails).

Thank you, sooooo much for giving us such an amazing review ....I'm a server @ SAMAR and I Love the atmosphere we create @ SAMAR .... People are amazed by Cheff PYLE's food and we; as servers work hard to give our guest the service ,that his reputation deserves....I feal PROUD that you had a great experiance ...