Well, it’s done.  The premiere — and recording session! — for my new trombone concerto has come and gone, and it couldn’t have gone better…

I blogged about my personal trombone master class with Joe Alessi back in June, then blogged about the concept for the concerto back in July, and then set to writing actual notes, which I finished in early November. The Ridgewood Concert Band in New Jersey gave a “preview” performance in early December, but I didn’t hear it. In fact, I’d never heard the piece, straight from start to finish, until I sat in the audience for the official premiere on Friday night. But I need to backtrack a little more.

The West Point Academy Band was the co-organizer of the consortium to commission the concerto, and from the beginning, they were the ensemble stuck with the “official premiere,” which they were to present with Joe Alessi (principal trombonist with the NY Philharmonic — and generally considered to be the greatest trombonist ever to walk the earth) at the Eastern Division CBDNA (college band directors national association) Convention.  I knew I was writing a concerto for the best trombonist ever, meaning I could write literally anything. If Alessi — for whom Christopher Rouse wrote his Pulitzer Prize-winning trombone concerto! — couldn’t play the part, it simply wasn’t playable.  Also, um, Joe f*ckin’ Alessi.  So, uh, no pressure.  (Did I mention that he premiered the Rouse concerto?!) 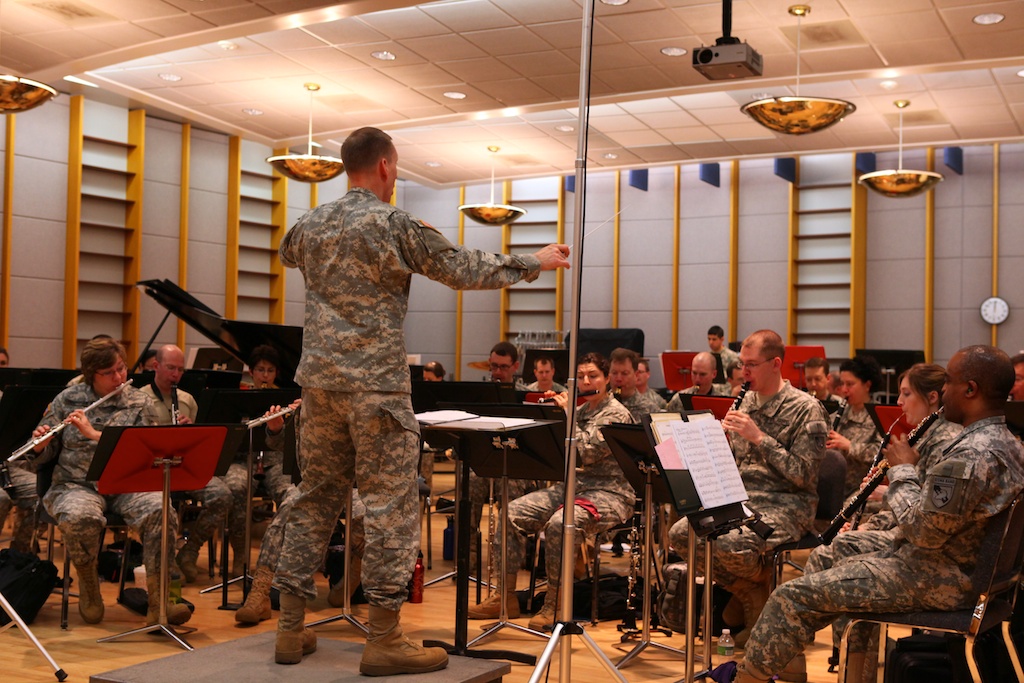 I was relieved that I had these two hours with the band but without Alessi because it gave me the opportunity to find and fix some big errors — like completely wrong notes in the horn parts. (Remember, kids: horns are in F.) The horns, by the way, were incredible. The parts in the piece are extremely demanding, but you’d never know it hearing these players. 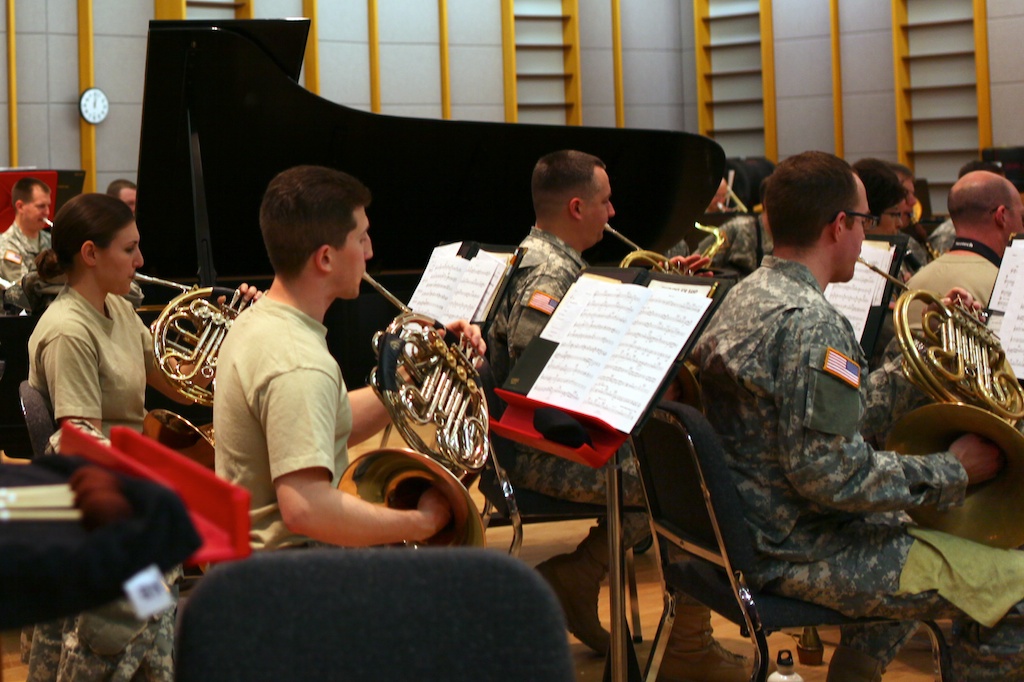 (Speaking of which, in case anybody was wondering, the West Point Band is a professional ensemble — a permanently-stationed Army Band. They’re stationed at the Military Academy, but these aren’t students — they’re pros. And boy howdy, you can tell.)

The concerto has a prominent double bass part, loaded with percussive “Bartok pizzicato.”  I put snap pizz. in most of my bass parts, but how often is it actually the loudest thing in the entire band? Never. Until SSG Phillip Helm plays the part. I have never heard (and seen!) such a powerful snap pizzicato. I thought he was going to rip the bass in half. I love this guy. 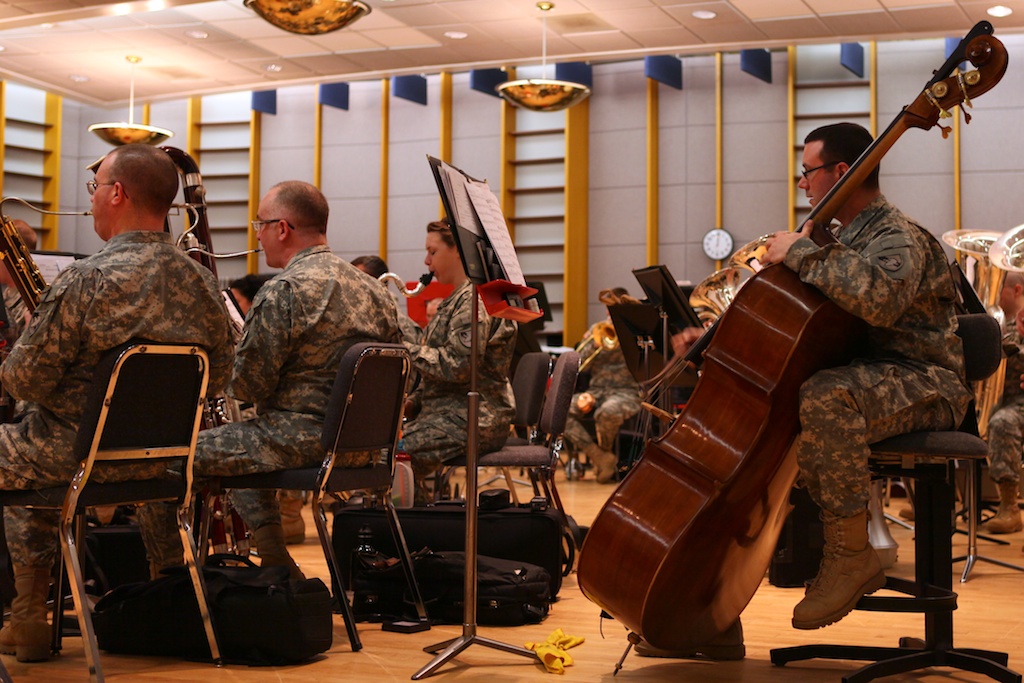 The next morning, I was up bright and early. Good thing my army housing had coffee (and artwork) in the lobby! 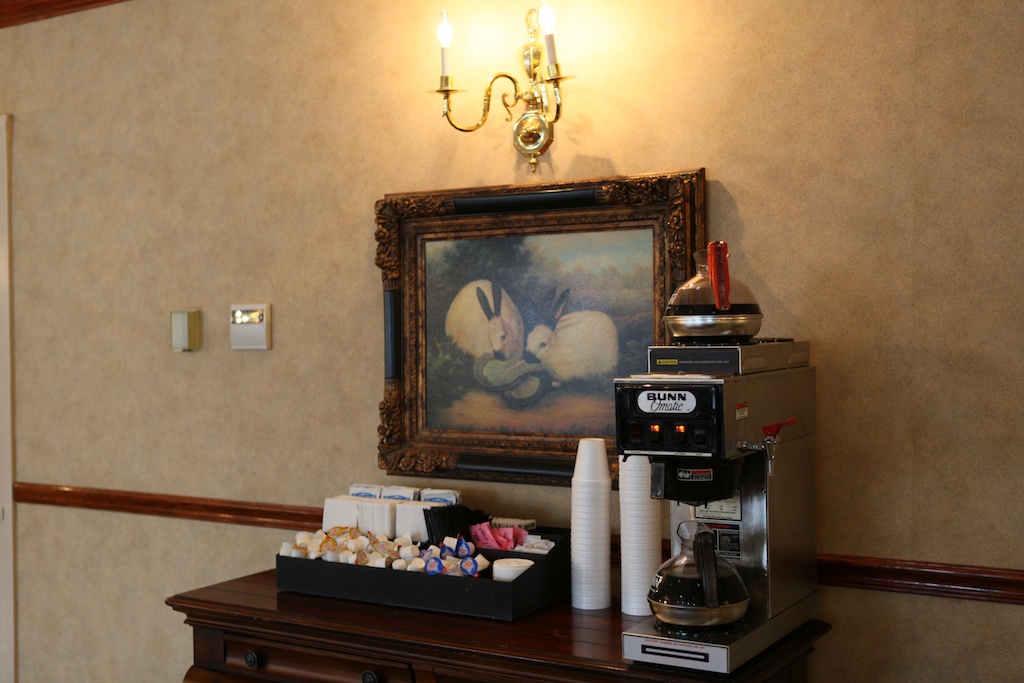 Why was I up so early? Because that day — Friday, March 5 — was the day of the recording session. On a piece that I had still never heard in person with the soloist. 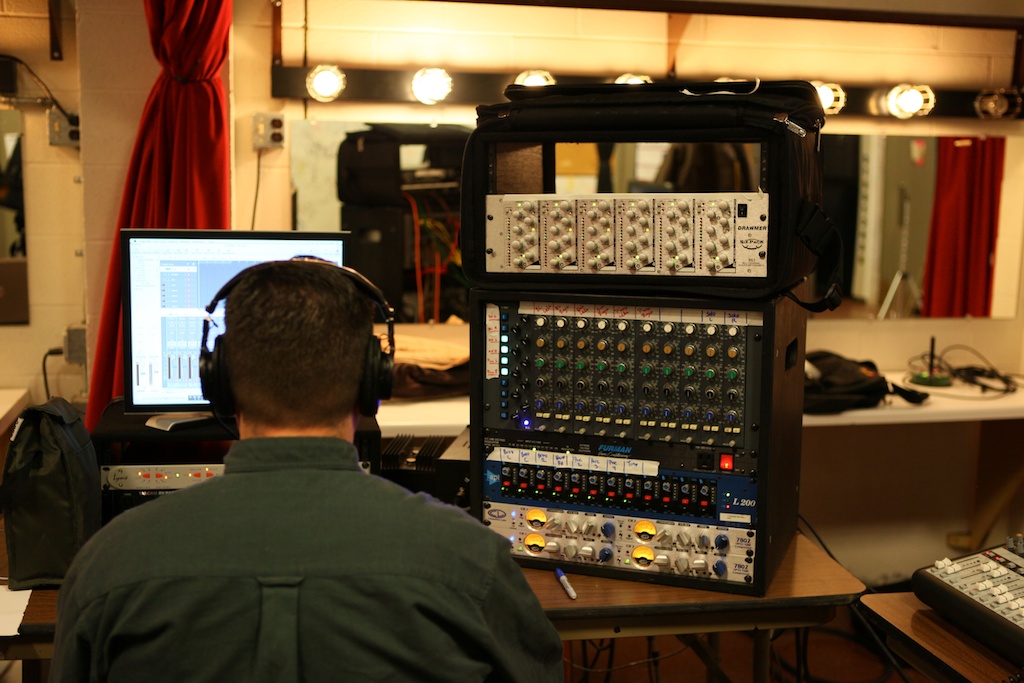 I’ve had recording sessions with ensembles prior to their individual performance, but never prior to even hearing the piece — that is, recording the piece before it even premieres. What if something was just awful, or I found that I hated a particular measure? Well, too late to fix it now! 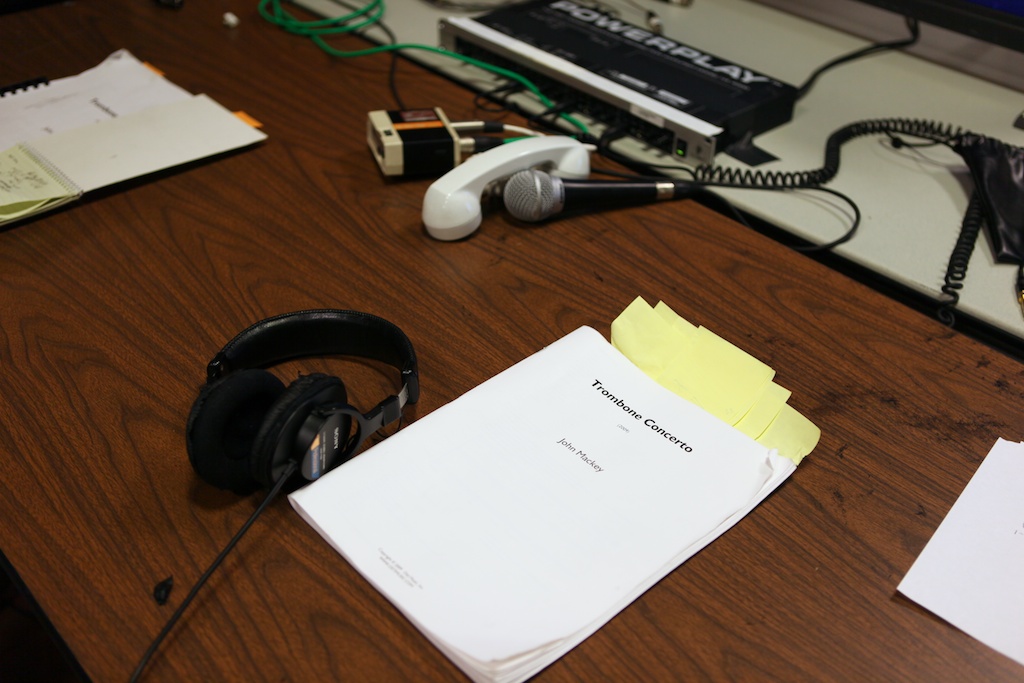 We started by recording the end of the piece, because it’s probably the most demanding chop-wise for everybody. The last note of the piece, per Joe Alessi’s request, is a gliss-hit off of high F. As in, the F at the top of the treble clef. As in, the note that is the top standard note on a French horn. But this ain’t a horn concerto — it’s a trombone concerto. That F is a ridiculous note. I’d originally written the piece to end on the F an octave lower, but Alessi asked if I’d mind if he took it up an octave. “After 18 minutes of non-stop playing, you want to end with that high F?” I asked. His reply: “Well, if I don’t do it, somebody else will.” Right on. 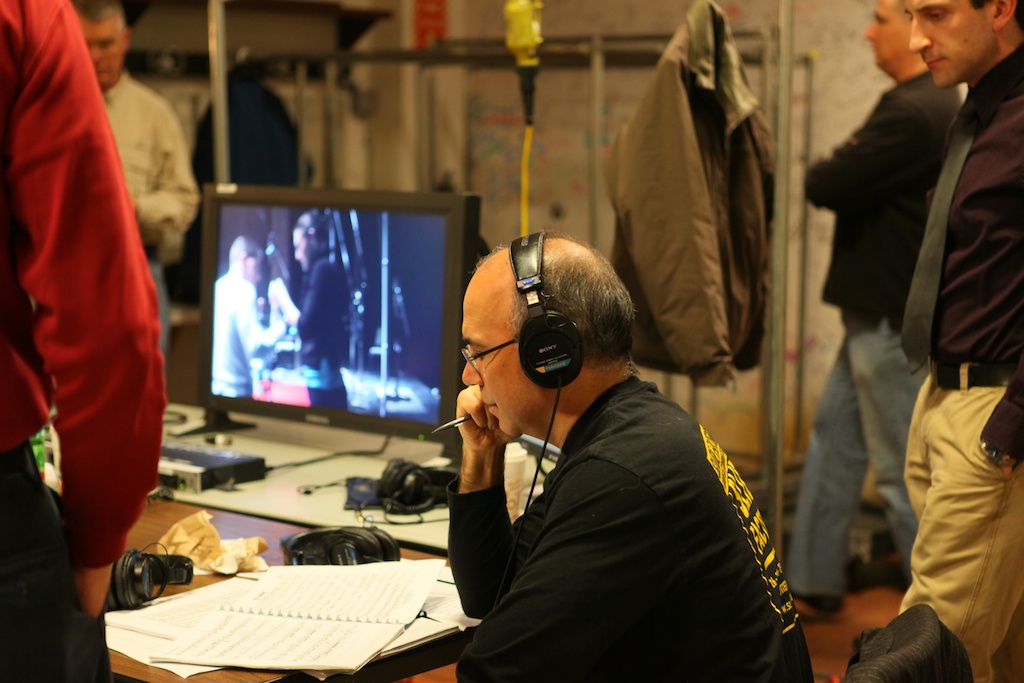 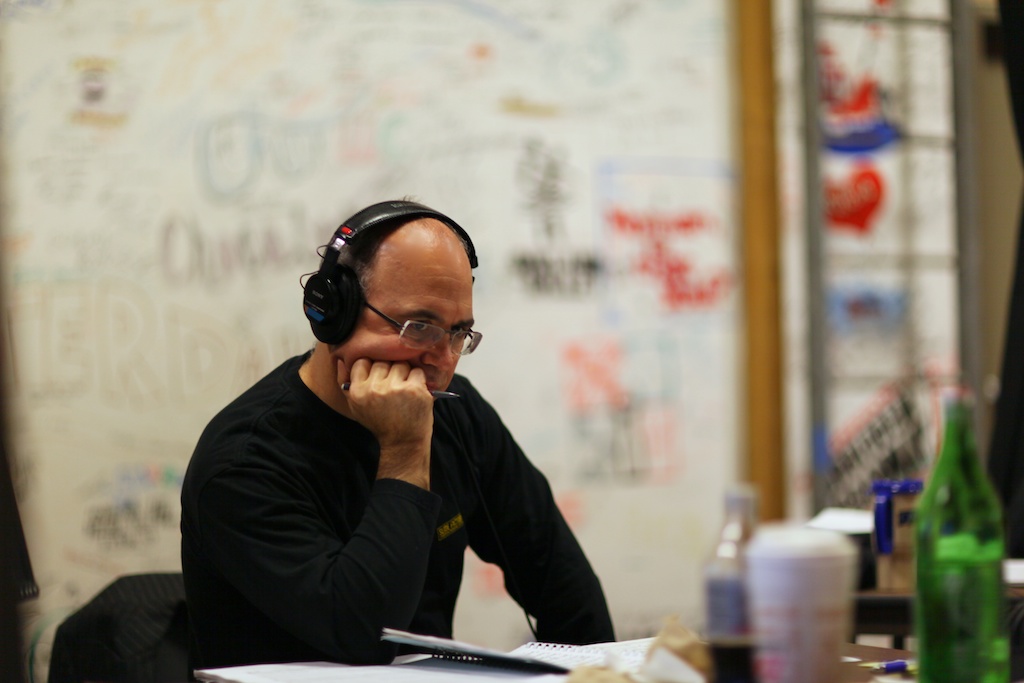 The session was pretty incredible. I think the CD — which we’re going to release as a free download on my website as soon as it’s ready — will be a stunner. Here I am with Alessi and LTC Timothy Holtan, the director of the band. 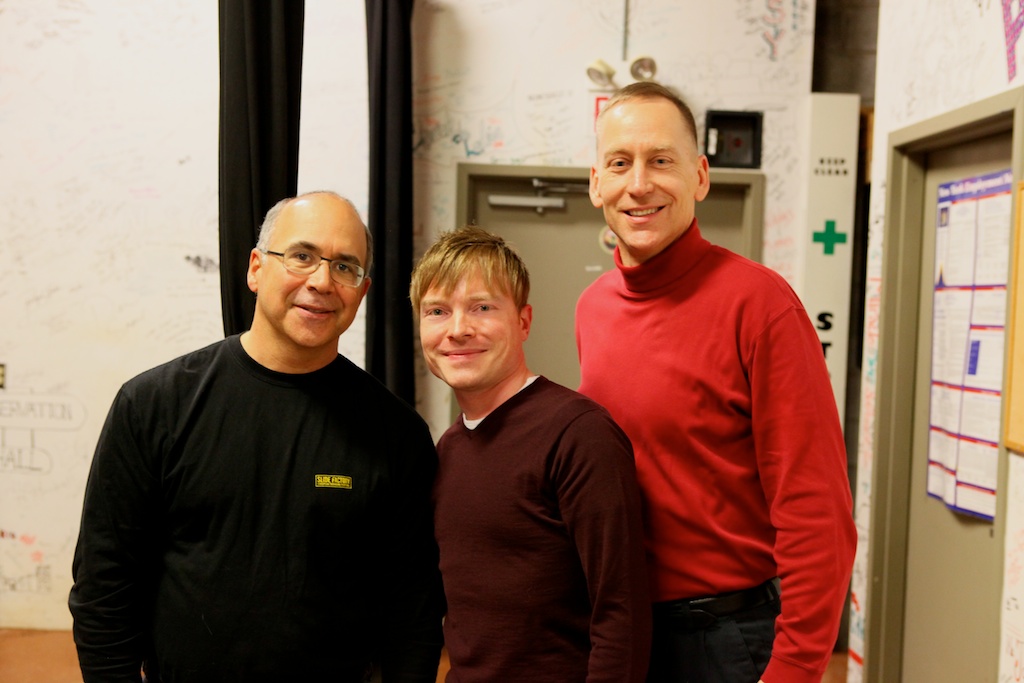 Then I flew home for a few days, and then flew back to the east coast — to West Chester, Pennsylvania, for the premiere of the concerto. West Point’s concert also included the premiere of “Points of Departure” by Roshanne Etezady. Here’s Roshanne during the sound check for her (very fun) piece. 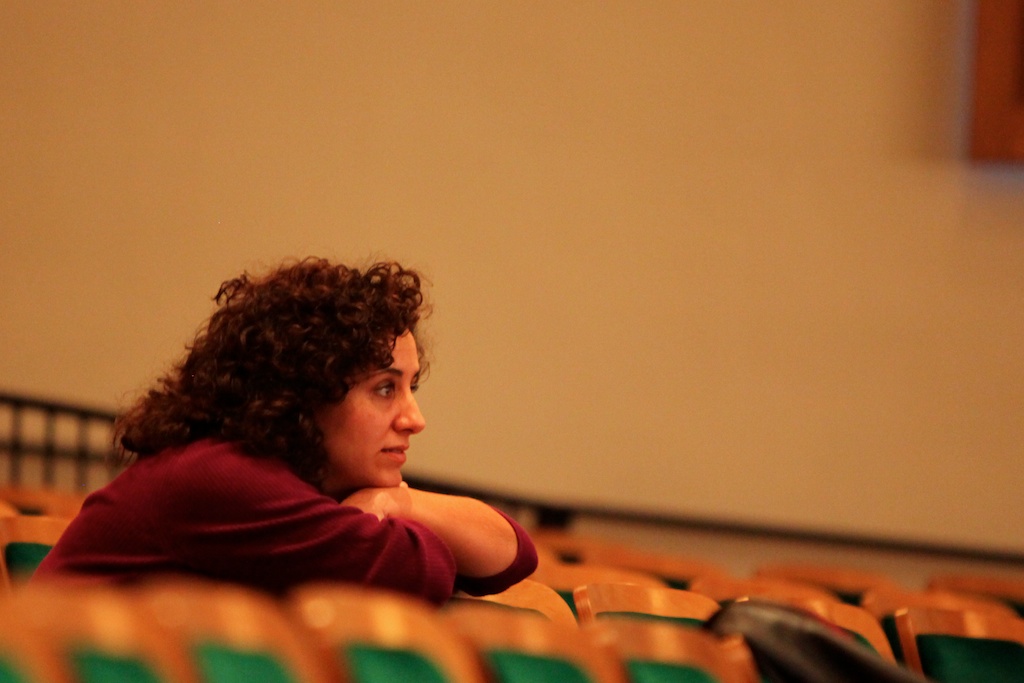 Here, Alessi and Holtan go over a few things during the sound check. 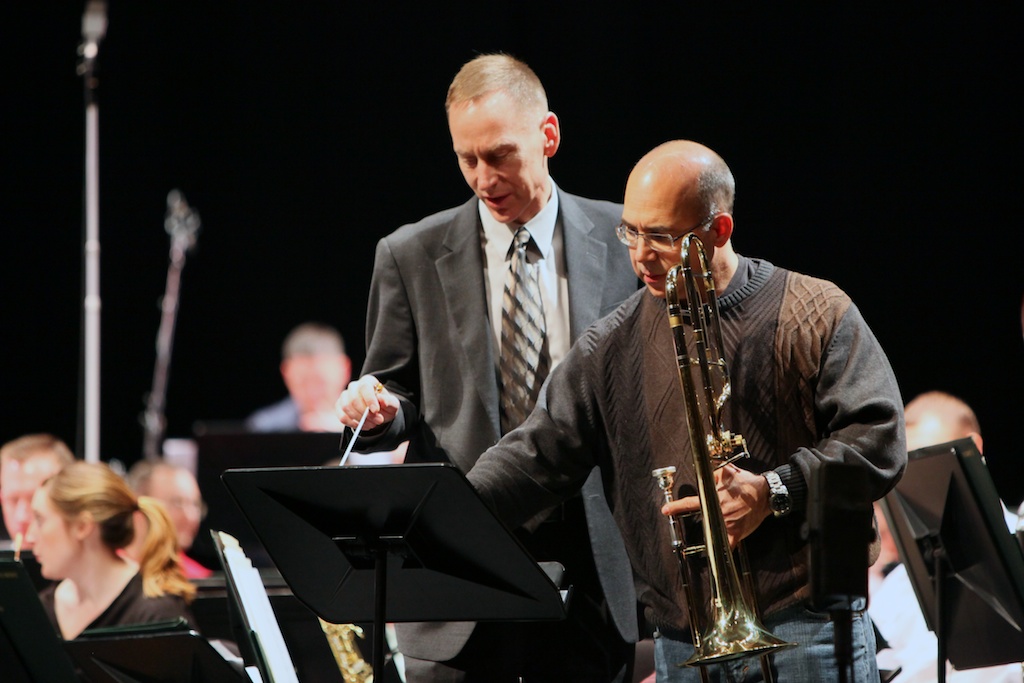 Alessi and the West Point Band were flawless. There’s one especially demanding moment in the slow movement where Alessi works his way up to high D — a note so high that I had to create a new sample for it in my MIDI playback, because trombones aren’t supposed to play that high — and he hits this D just perfectly and beautifully, coming at the end of this long legato line. He hits it mezzo-forte, holds it while the ensemble drops out, leaving him alone with this insane note, which he then shapes dynamically down, then back up again, holding it seemingly forever until the band comes back in, and he continues playing — in the same register. It was perfect. The audience audibly gasped when he did it. (That moment was topped only by the end of the first movement — and the movements are all connected, so there was no pause — when Roshanne’s dad let out a “wooo!” from the back of the hall.) 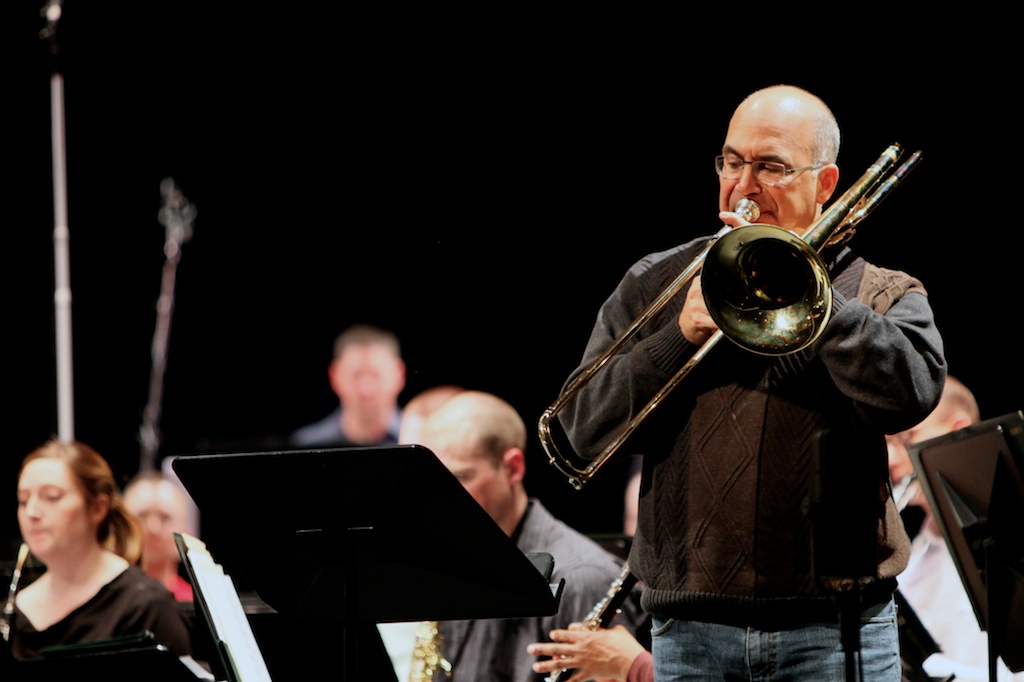 It was an amazing night. Alessi is coming to UT Austin in September to perform the piece with Jerry Junkin and the UT Wind Ensemble, but that performance can’t come soon enough. I want to hear him play it again now! I’d heard all about how brilliant Alessi is, but I didn’t know what that really meant until Friday. He’d be a brilliant artist on any instrument. I’m just so happy that through some insane bit of fortune on my behalf, he’s the person who was tasked with premiering this concerto and making my little 18 minute doo-dad sound like something important. (Also, if you want to get a whole lot of applause and pretend it had something to do with you, have Joe Alessi play your piece. Holy shit.) 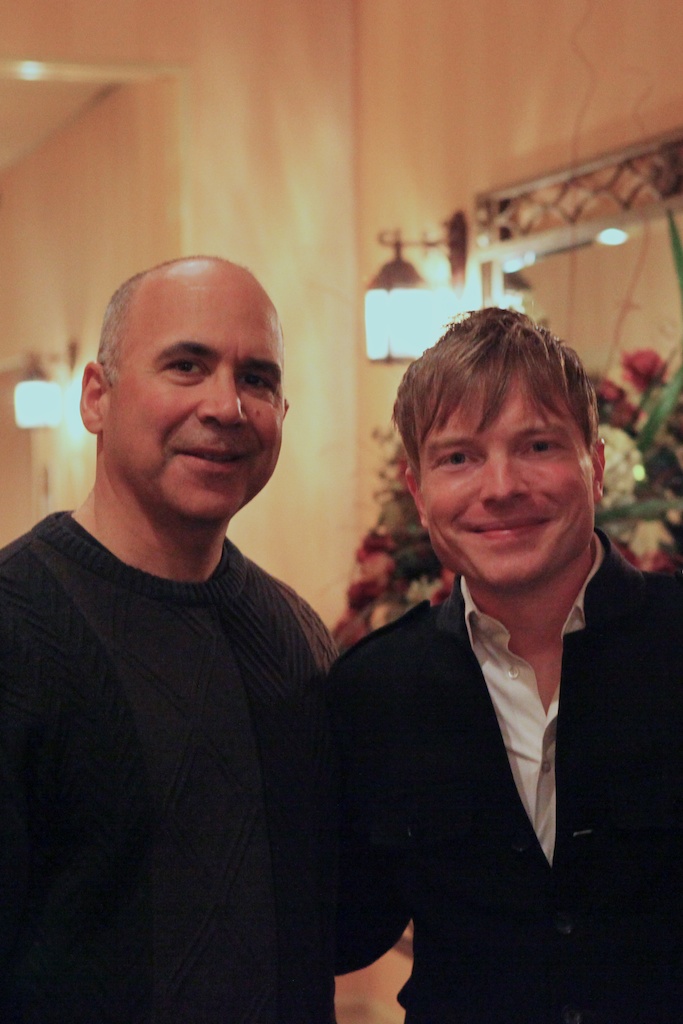 Can't wait to hear it!

How funny! Looking at your picture of the horn section, I notice that one of them is a former high school student of mine!

She was pretty damn awesome back in high school, I can't imagine how bad-ass she must be now.

I love the pic of Joe Alessi wearing the Sony MDR series studio headphones, listening intently. I love those cans, I've owned a couple of them in my time.

What a dream! Have you woken up yet? I had to play the solo on the premiere of my own trombone and band piece, and I wasn't in a hurry to write another concerto, but when the Barlow Commission last year involved writing a concerto for Alessi to premiere, I couldn't pass it up. They, of course, were able to pass up me... Congratulations! Seriously thinking of taking a fourteen-hour drive to Austin to hear the piece in September.

In the last photo Joe Alessi seems to be pinching your wallet...

Seriously, I really enjoy your blog!

I saw Alessi do a pre-premiere of this piece on March 7th? 8th? With the West Point Band. It was completely RIDICULOUS!! I absolutely loved Alessi's playing, and I thought the piece was amazing in and of itself.

I was there that night with Susquehanna University Symphonic band, and it was AMAZING. I would die to hear this piece again!

What a WONDERFUL addition to the trombone repertoire! I'm going to try to talk my orchestra director into doing this piece. It reminds me a bit of Florent Schmitt's "Dionysiaques" which I got to play during my days at U-M.

I heard Alessi was recording for one of his CDs once and had Mahler 5 that night...spent 8 hours recording. Hurts my face thinking about it.