“Wouldn’t it be cool, as a percussionist, when you first realized that playing percussion wasn’t just hitting a snare drum or playing a glockenspiel, but it also meant finding non-traditional instruments like trash cans and brake drums? Why not write the piece that could be the first to expose young percussionists to this concept?”

This is what AEJ said to me probably two years ago. Thanks to her idea, and Facebook, I have a new piece: “Foundry,” for concert band with “found” percussion. And it’s my first “grade 3” piece.

At least as far as my catalog shows. Back in late 2009, I tried to write a “grade 3” band piece. It was a total failure. Nobody will ever see that piece.

If you aren’t a band person, you might need some clarification. The technical difficulty of band music is categorized by grade levels, ranging from 1-5, or 1-6, depending on what state (or publisher) is doing the classifying. If we go with levels ranging from 1-6, I would say that “Redline Tango” is a “grade 6” (meaning, essentially, “professional level”), “Kingfishers Catch Fire” is probably a “grade 5” (except for the horn parts, which are like a grade 15), and “Undertow” is likely what most would call a “grade 4,” meaning it should be playable by most decent high school bands and a small handful of middle school bands. A “grade 3” piece should be playable by just about any high school band, and just about any (good) middle school band. 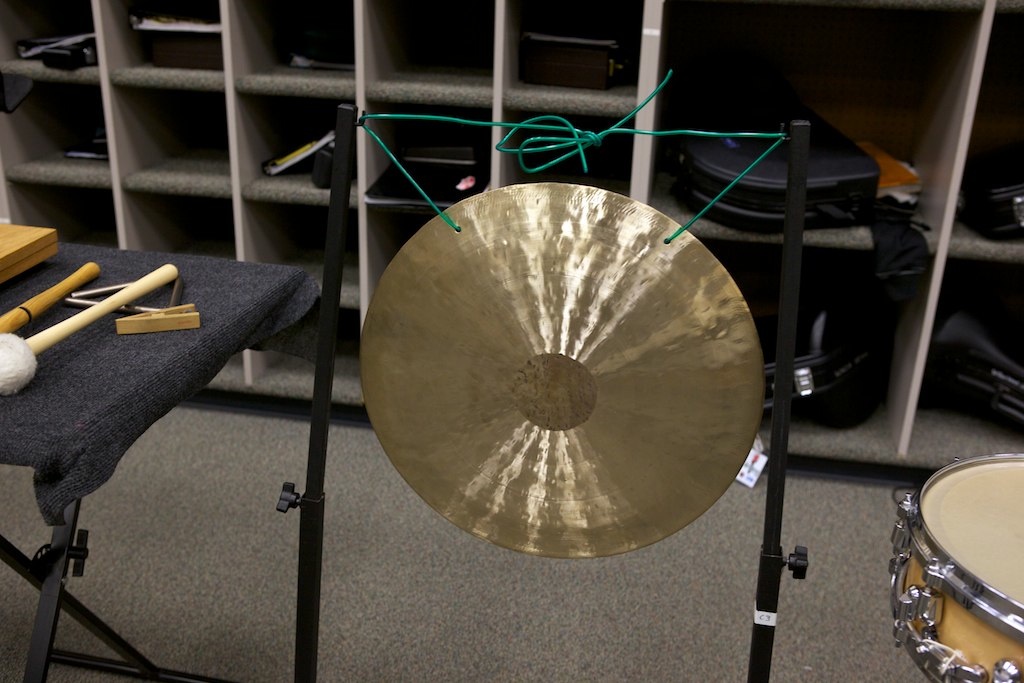 The lower you go in grade level — ie, the easier the piece is to play, technically speaking — the harder it is to write, at least as far as I’m concerned. It’s as if every piece of music has a required number of “difficulty units,” and those units go to either the composer or the performers. If I can depend on the performers to supply all sorts of fancy technique — musical glitter fingers, if you will — then I don’t have to work as hard to make a piece seem exciting. If, though, the players are a little younger, and they can’t quite pull off professional-level feats (whether that be a fast leap up or down multiple octaves, or a ridiculous cross-rhythm, or just a strong, perfectly-in-tune sustained note), then the composer needs to make the less technically demanding material sound organic and still interesting. Not much is worse than a piece that sounds “dumbed down.” 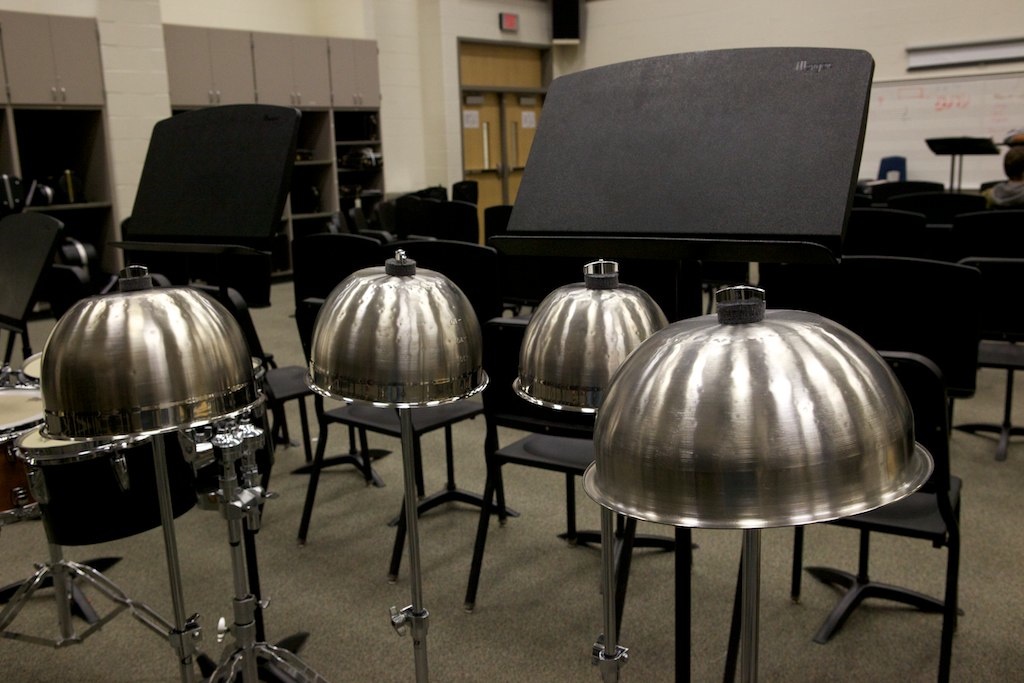 And that’s what my previous attempt at a “grade 3” piece was — sort of dumbed down. It seemed like every idea I had while writing the piece required technique that you won’t find in a normal middle school band. Low-register trumpet! Nope. Lots of oboes! Nope. This cool, angular melody, with lots of chromaticism! Nope. Can I at least get a B-natural? No.

Last spring, I decided that I wanted to try one more time to write a real “grade 3” piece — one that wasn’t dumbed down, but that sounded exactly the way I wanted it to sound from the beginning. If I had a good concept from the start — a concept that would suggest material that just happened to be playable by younger bands, rather than material that was forced into being easier — then it was worth giving this one more shot. But how would I fund it?

Facebook. Last June, I posted a status of Facebook, saying that I wanted to write a grade 3 piece, and I asked people to email me if they wanted to help fund it. By the next day, the consortium was complete. I <3 Facebook. 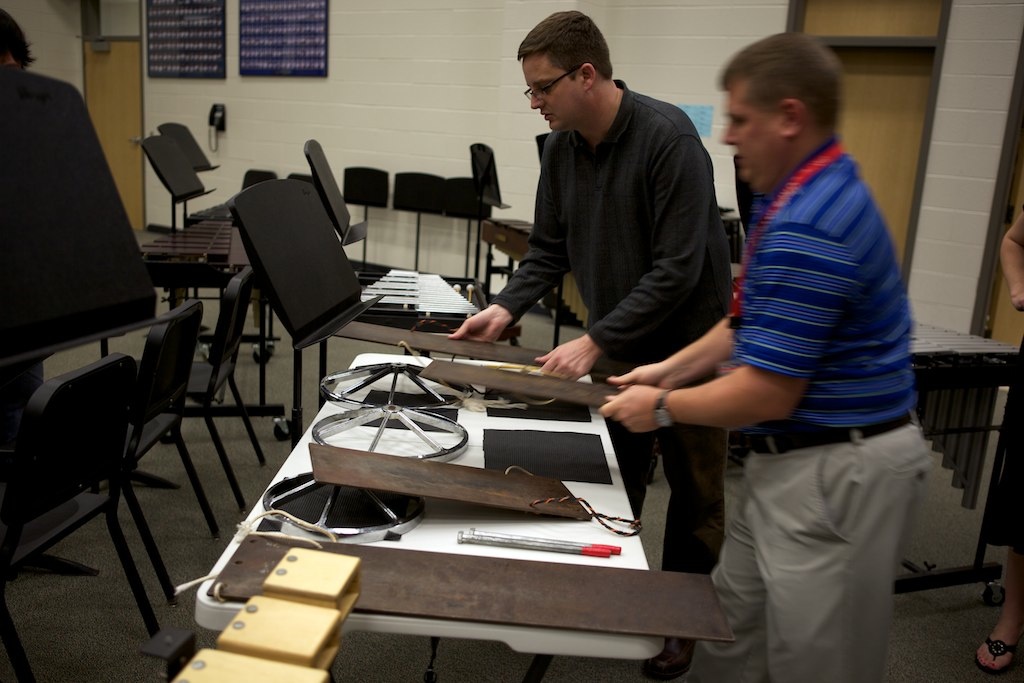 I went with AEJ’s idea of “found percussion.” This is not, of course, a new concept in music, and I’m sure it’s been done in young band music before, too, but it gave me a starting concept — one that would work as a teaching tool, but even more important, one that would let me write something that I wanted to write. 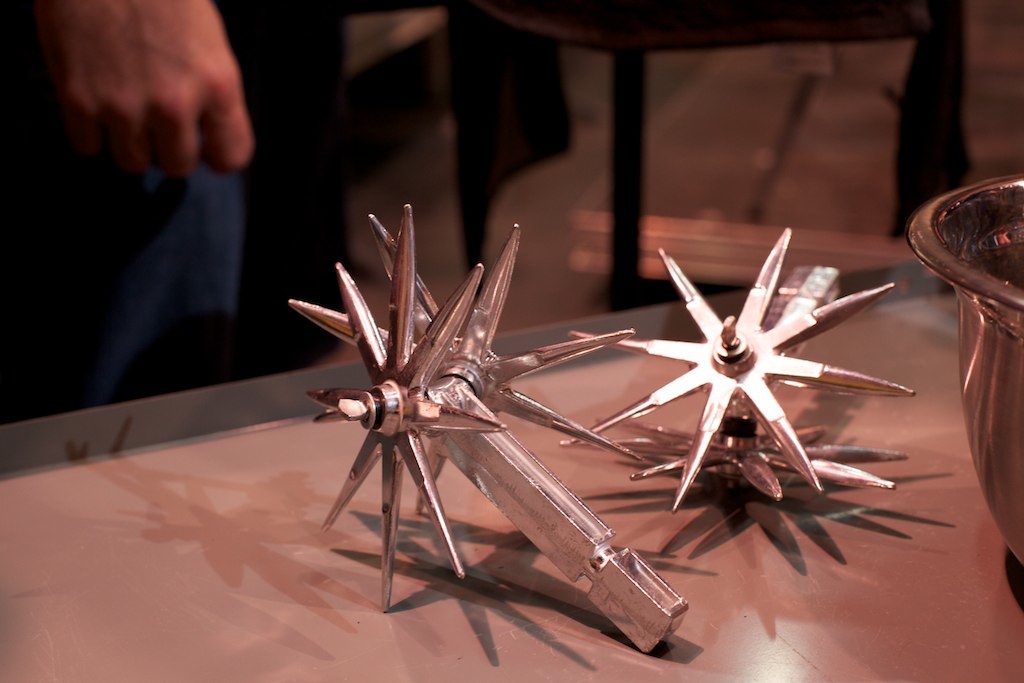 “Foundry” calls for 12 percussionists, playing everything from traditional instruments like tom-toms and bass drum to “found” instruments like “4 piles of metal,” a “clang,” and “4 wooden objects.” I’ve worked with a few of the consortium members on the piece, and it’s been exciting to see how differently the different groups go about selecting the percussion instruments. (Both the above and below pictures show tables containing the requested “piles of metal,” as interpreted by two different schools.) 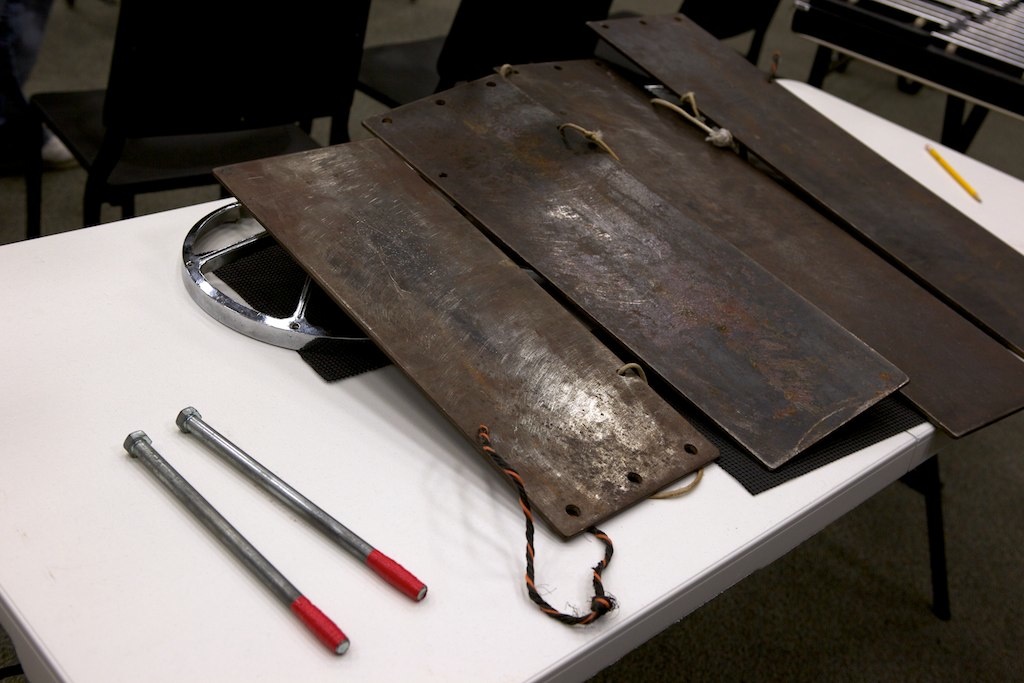 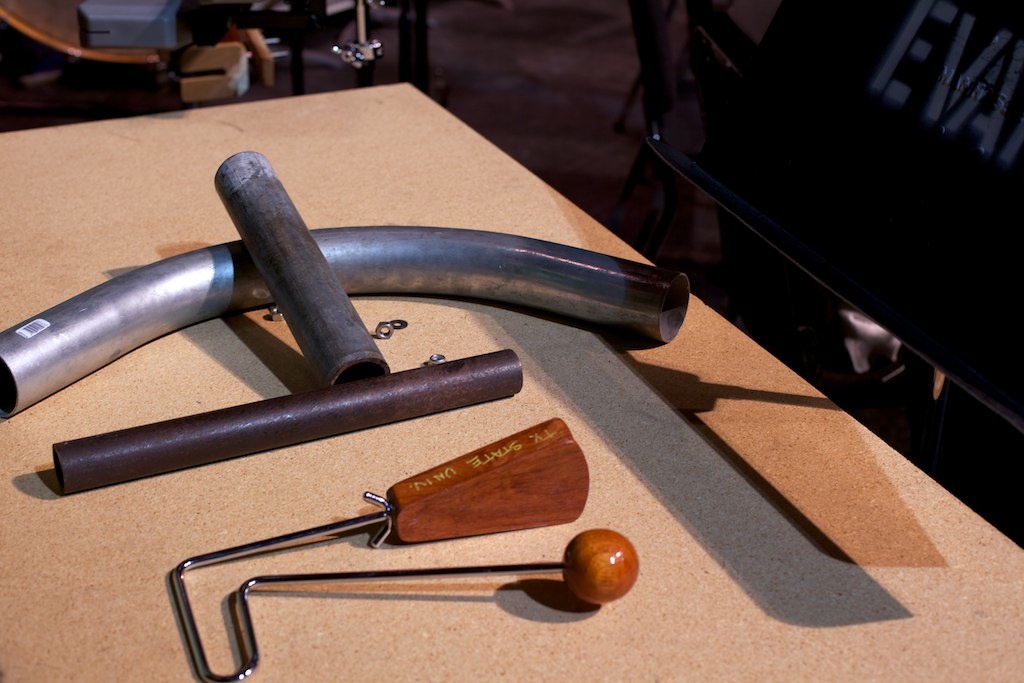 One warning… If you write a percussion part calling for a “whip,” you normally get a slap-stick, which is two wooden boards that get slapped together. If you’re in Texas, though, you get an actual bull whip. 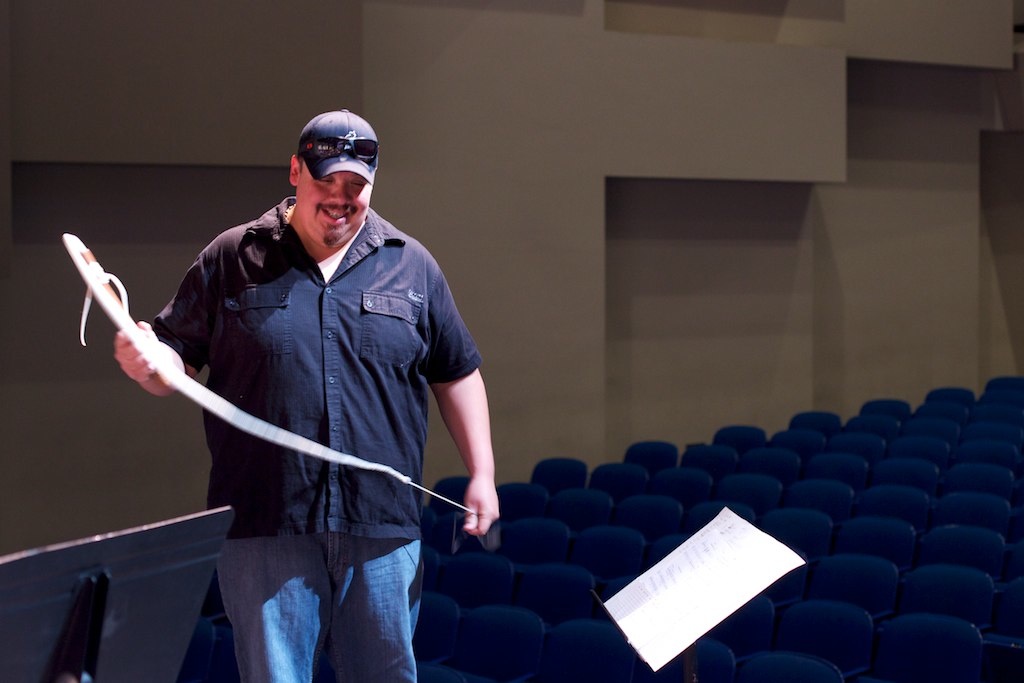 I’m going to miss this place.

I hope you’ll check out my first real grade 3 piece, “Foundry.” Or as I almost called it, “Asphalt Virgin Cocktail.”

My step son plays for Conner Middle School band and they just played Foundry tuesday night and I just wanted to tell you that I absolutly loved it. Great job!!!

Dear John, it's been always a pleasure to play your music, and to reed your comments!
I am looking forward to premierinf Foundry in France, as I did with Kingfishers, Undertow, Strange Humors and of course your marvelous saxophone concerto. Take care.
Bien Ã  toi, cordialement, Miguel

John - we are LOVING working on "Foundry" at the UBC Summer Music Institute. The percussion are rockin' out! You will probably hear from students here, as the blog has become "required reading" ...

Thanks for creating such a great piece at this level!

Well, we played Foundry at the UBC Summer Music Institute concert today - it was a huge success! We really enjoyed the piece, and performed it rather decently (I hope Dr. Taylor agrees with me here). It was a real crowd-pleaser as well - a fitting end to an fantastic concert. I'm glad I got an opportunity to be exposed to your work, and I look forward to playing more of your music soon! (any clarinet concertos in progress?)

I played Foundry in a reading clinic band last week and quickly fell in love. I dropped a piece from this coming year's senior band repertoire (despite three months of prep and score study) to get Foundry into the lives of the students at Van Tech. I just can't wait for their experience to begin! Thank you for careful composition and honest editing...it makes the world of music education a better place!

This song is so awesome. I am so jealous be cause I am a percussionist and the grade ahead of me got to play this....excellent job on this song for sure.

We played Foundry at our Thursday night concert this week, and again today at a community band festival. It's such great fun to play...we had several percussion pieces made too...and one of our musicians actually broke the hammer he was using! :)

I really enjoyed this piece. I work at a foundry and I know your music is from "found" items;but you really nailed the feeling of walking through a foundry. If you get down to Tyler,TX sometime look me up and I will give you a tour so you get the full effect ! The link for my website is actually a video of the foundry watch the whole thing so you see the machinery and hot molten iron. Thanks