A Year of Kitty

Okay, this entry may make some of you gag. It has nothing to do with music. It’s entirely about Loki, our cat, who turned 1 year old today.
Get ready for the sweetest blog entry you will ever see here. I give you “The Year of Loki.”

Who can forget the day that AEJ and I met Loki? 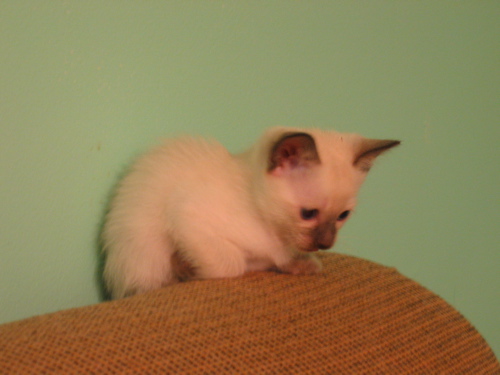 And Loki’s first (and still only) car ride? 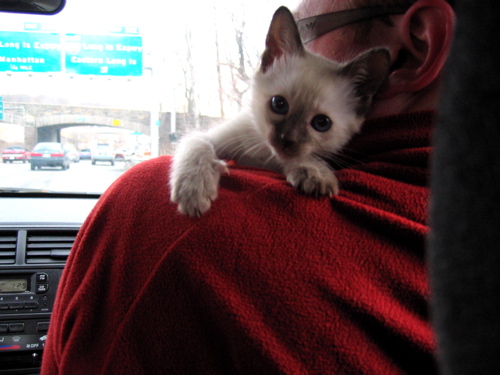 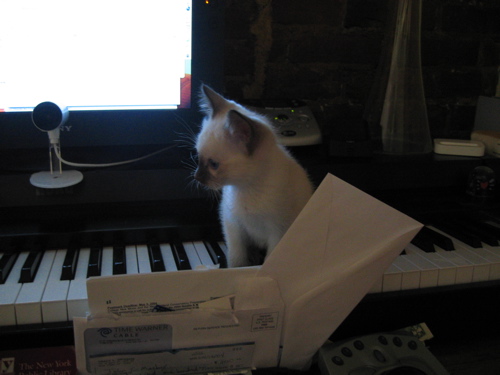 Other times, he wants to actively “help.” He’s quite helpy. 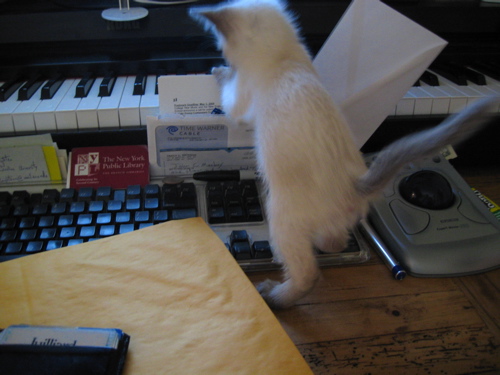 But after a few minutes of intense composition, Loki needs a nap. 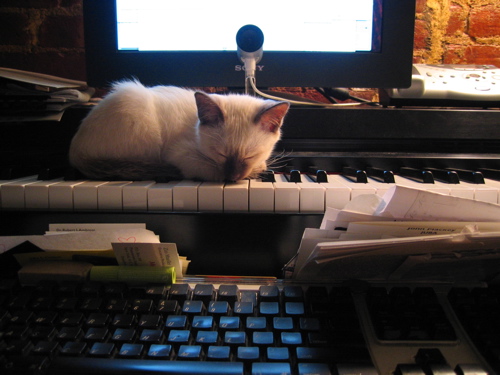 Loki used to be awfully tiny. Can you find him in this picture? (The stunning blonde is none other than AEJ.) 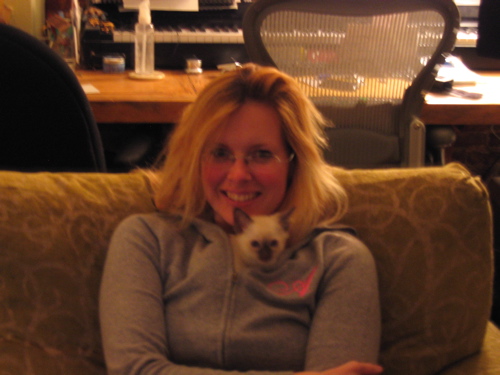 In fact, he used to fit on top of his scratching post. 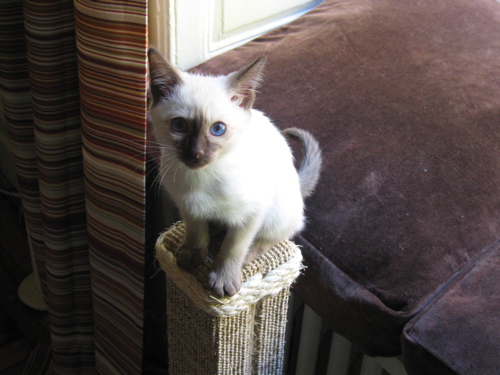 Now, though, he barely fits in this bucket. 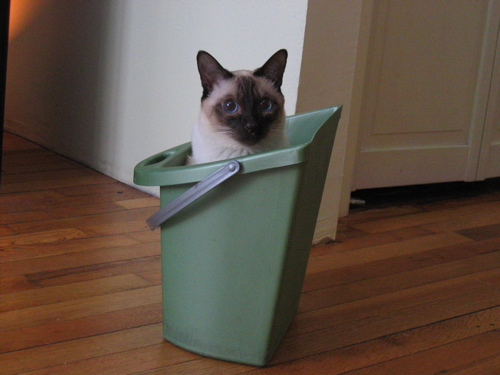 Sure, he may look sweet one minute… 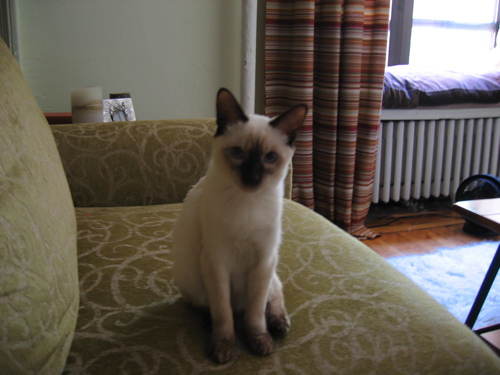 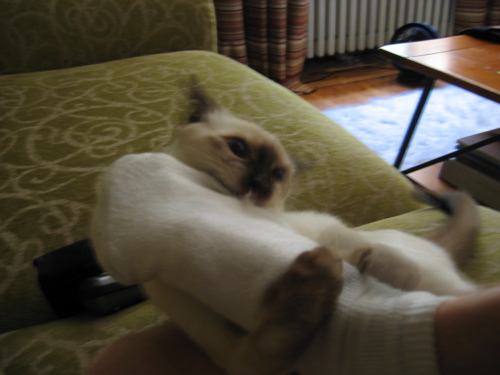 … especially if you’re a mouse. Who can forget Loki’s first mouse friend? (It’s a true New York apartment, in case there was any doubt.) 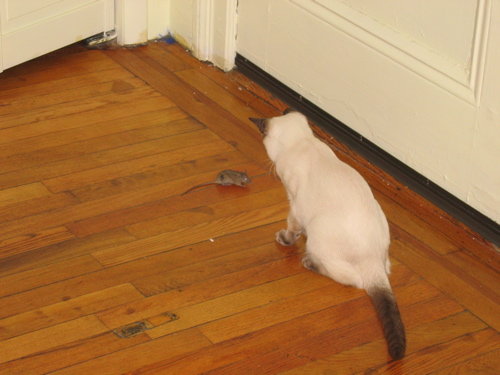 And Loki’s first day outside? (I have no idea who that little girl is, but she took quite a liking to Loki.) 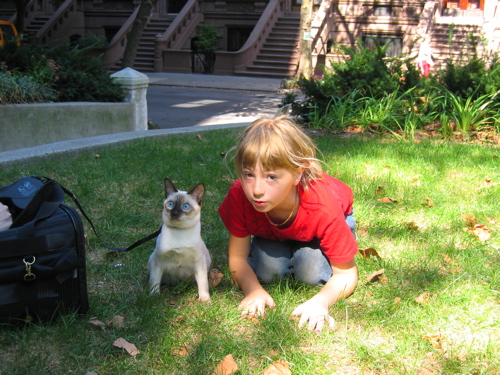 Then there was Loki’s first Christmas — and his introduction to Robosapien. The two never really did hit it off. 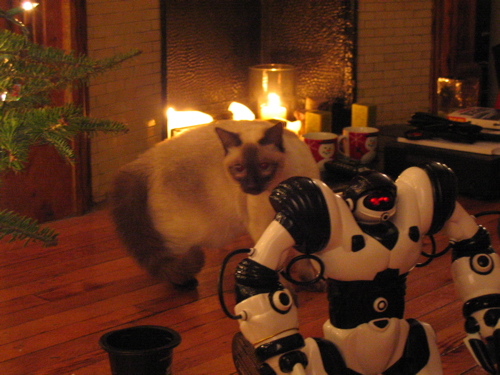 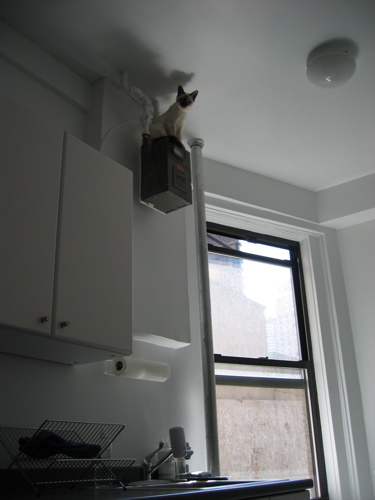 Other times, he likes to sit in boxes. Yahtzee, anyone? Loki prefers the Harley Davidson edition. 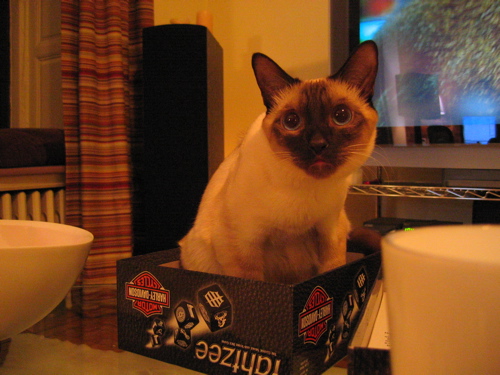 After a hard day of sleeping and attacking our feet, sometimes Loki likes lounging on AEJ’s lap. Apparently he’s never seen how cats are supposed to sit. 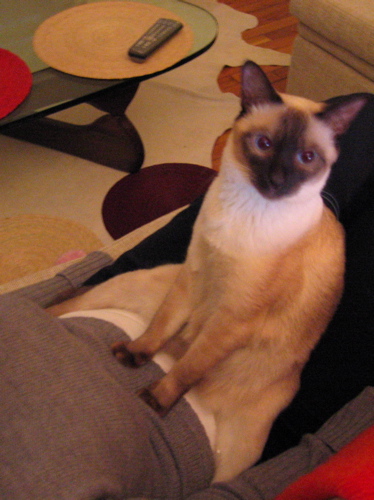 We love little Loki. He weighed 1 pound when we got him, and now he weighs 10. As AEJ likes to say, “we grew him!” Happy birthday, Mr. Kitty! 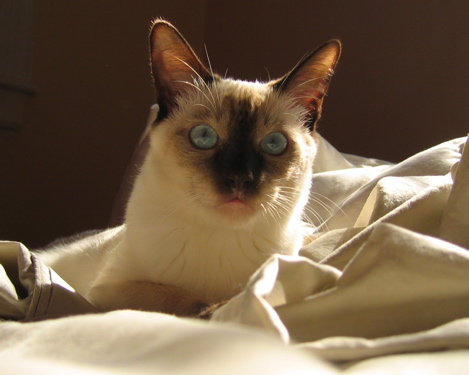 (I promise that normal blog entries will resume tomorrow, for those of you with no soul.)

Hey there. I was just researching your piece Redline Tango since we are getting ready to play it (Bowling Green)! In fact, we just read it today. Anyway I wanted to let you know that A. the tango is GREAT!! and B. your cat is verrrrrrrrrry cute. Thats all and thanks!

Loki is about as cute as they come.

Loki is the most darling boy I have ever seen. He rivals my girl Sugar and that's saying something. I wish I'd chronicled her growing up as you have Loki's. This is really a sweet entry. :)

So...this could totally be a children's book.

I attended a great concert tonight and heard "Asphalt Cocktail" What a wonderful composition. I hope Loki enjoys his 3 new friends. I think of them as hear no evil, see no evil, and speak no evil. I hope Loki has not outgrown a love of mice. Thanks for making my evening so enjoyably music filled.

Heard you music for the first time on Saturday at Merit school in Chicago. Fell in love with it.
Thanks for writing it!

I love these pictures! I used to have a Siamese named Angel and she was WONDERFUL! Loki looks like he is a very typical Siamese - up high and feisty! Now, does he talk all the time is the question??? :-D

Thanks for sharing his antics and adventures - they brought back some wonderful memories!

Loki is one beautiful and lucky cat!

Thank for posting these photos.

I may have just teared up at this.